From Wikipedia
https://en.wikipedia.org/wiki/Scindia
Ruling dynasty of the Indian state of Gwalior (1731-1948)
For the Maratha clan, see Shinde. For the neighbourhood, see Scindia, Visakhapatnam.

Scindia dynasty (anglicized from Shinde and also spelled popularly as Shinde in Maharashtra), is a Hindu Maratha dynasty of Kunbi origin that ruled the erstwhile State of Gwalior. It had the patel-ship of Kumberkerrab in Wai. It was founded by Ranoji Scindia, who started as a personal servant of the Peshwa Bajirao I. [1] [2] [3] [4] Ranoji and his descendents along with their rivals the Holkars, played a leading role during the Maratha ascendency in North india during the 18th century. The Gwalior state was a princely state under the British Raj during the 19th and the 20th centuries. After India's independence in 1947, several members of the Sindhia family went on to join Indian politics.

The Scindia dynasty was founded by Ranoji Scindia. [1] [2] [3] [4] Ranoji prospered early under Bajirao because of the favorable circumstances created by the appointment of Bajirao as the Peshwa at the age of twenty.This had evoked jealousy from senior officials like Anant Ram Sumant, Shripatrao Pant Pratinidhi, Khanderao Dabhade and Kanhoji Bhosle.This led Baji Rao to promote as commanders of his troops, talented young men who were barely out of teens such as Malhar Rao Holkar, the Pawar brothers, Pilaji Jadhav,Fateh Singh Bhosle and of course, Ranoji.None of these men belonged to families that held hereditary Deshmukhi rights under earlier rulers such as the Deccan Sultanates. [5] [6] The Shindes or Scindias had served as shiledars (cavalrymen) under the Bahmani Sultanate and played an important role in the state of affairs and held Patilki of Kumberkerrab. [7] [3] 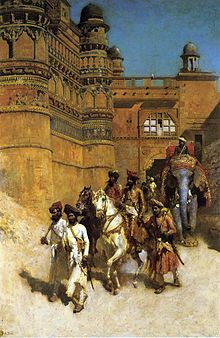 The Maharaja of Gwalior Before His Palace

According to records of British period there are several anecdotes about origin of Scindhias ,specially Sir John Malcolm's record illustrates that:

Scindhia hailed from cultivator caste Kunbi like Holkars who were of Dhangar origin.In ritual status they were regarded as Shudra.The founder of Scindhia dynasty ""Ranoji"" was in service of Peshwa Bajirao. One day Bajirao came out of his camp and Showed his servant(Ranoji) sleeping with his sleepers.He was so impressed with faithfulness of his servant that he promoted him to his bodyguard . [8]

Stewart Gordon, also agrees to the cultivator,etc. origin of other Marathas as well. [9]

The Scindia dynasty was founded by Ranoji Scindia, who was the son of Jankojirao Scindia, the Patil of Kanherkhed, a village in Satara District, Maharashtra. [10] Peshwa Baji Rao's career saw the strengthening of the Maratha Empire. Ranoji was in charge of the Maratha conquests in Malwa in 1726. Ranoji established his capital at Ujjain in 1731. His successors included Jayajirao, Jyotibarao, Dattajirao, Jankojirao, Mahadji Shinde and Daulatrao Scindia.The Scindias became a major regional power in the latter half of the 18th century, and figured prominently in the three Anglo-Maratha Wars.They held sway over many of the Rajput states, and conquered north India. In 1818, after accepting the terms of a subsidiary alliance with the British, the family shifted their base from Ujjain to The Gwalior.

Rulers of Gwalior state under the British

After the defeat of the allied Maratha states by the British in the Third Anglo-Maratha War of 1818, Daulatrao Shinde was forced to accept local autonomy as a princely state within British-occupied India and to give up Ajmer to the British. After the death of Daulatrao, Maharani Baiza Bai ruled the empire, saving it from the British power, till the adopted child Jankoji Rao took over the charge. Jankoji died in 1843, and his widow Tarabai Raje Scindia successfully maintained the position and adopted a child from close lineage named Jayajirao.

The Scindia family ruled Gwalior until India's independence from the United Kingdom in 1947, when the Maharaja Jivajirao Scindia acceded to the Government of India. Gwalior was merged with a number of other princely states to become the new Indian state of Madhya Bharat. George Jivajirao served as the state's rajpramukh, or appointed governor, from 28 May 1948 to 31 October 1956, when Madhya Bharat was merged into Madhya Pradesh.

In 1962, Vijayraje Scindia, the widow of Maharaja Jiwajirao, was elected to the Lok Sabha, beginning the family's career in electoral politics. [11] She was first a member of the Congress Party, and later became an influential member of the Bharatiya Janata Party. Her son Madhavrao Scindia was elected to the Lok Sabha in 1971 representing the Jansangh Party, he joined Congress in 1980 and served until his death in 2001. His son, Jyotiraditya Scindia, joined the Congress Party and was elected to the seat formerly held by his father in 2004. He later joined the Bharatiya Janata Party on 11 March 2020.

Vijayaraje's daughters have supported the Bharatiya Janata Party. Vasundhara Raje Scindia contested and won five parliamentary elections from Madhya Pradesh and Rajasthan. Under the Vajpayee government from 1998 onwards, Vasundhara was in charge of several different ministries. In 2003 she led the Bharatiya Janata Party to its largest majority in Rajasthan, and became the state's Chief Minister. [12] In 2013 again, she led Bharatiya Janata Party to a thumping win in the state of Rajasthan, winning over 160 out of the 200 seats in the assembly elections. Her other daughter, Yashodhara Raje Scindia, contested assembly elections from Shivpuri in Madhya Pradesh and won in 1998, 2003 and 2013 and also lok sabha 2004, 2009 from Gwalior. Upon the BJP's win in the state, she became the state's Minister for Tourism, Sports and Youth Affairs. Vasundhara's son Dushyant Singh entered the Lok Sabha in 2004 from Rajasthan. [13]

Shinde Maharajas of Ujjain and Gwalior 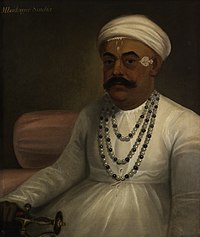