From Wikipedia
https://en.wikipedia.org/wiki/Dosa
For the notion of doṣa (bodily humour) in Ayurveda, see Dosha. For the genus of moths, see Dosa (moth). For the archaeological site in West Bengal, see Dhosa, Jaynagar.
Thin crepe originating from South India

A dosa is a thin pancake or crepe originating from South India, made from a fermented batter predominantly consisting of lentils and rice. It is somewhat similar to a crepe in appearance, although savoury flavours are generally emphasized (sweet variants also exist). Its main ingredients are rice and black gram, ground together in a fine, smooth batter with a dash of salt, then fermented. Dosas are a common dish in South Indian cuisine, but now have become popular all over the Indian subcontinent. Dosas are served hot along with chutney by tradition and sambar in recent times. Other accompaniments include chutney powder (a fine groundnut and lentil powder). 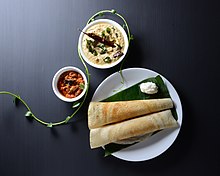 Dosas originated in South India; their exact birthplace in that region is a matter of conjecture. [1] According to food historian K. T. Achaya, dosa (as dosai) was already in use in the ancient Tamil country around the 1st century AD, as per references in the Sangam literature. [2] According to historian P. Thankappan Nair, dosa originated in the Udupi town of present-day Karnataka. [3] [4]

In popular tradition, the origin of the dosa is linked to Udupi, probably because of the dish's association with the Udupi restaurants. [1] Also, the original Tamil dosai was softer and thicker. The thinner and crispier version of dosai was first made in present-day Karnataka. [5] A recipe for dosa (as dosaka) can be found in Manasollasa, a 12th-century Sanskrit encyclopedia compiled by the Chalukya king Someshvara III, who ruled from present-day Karnataka. [6] 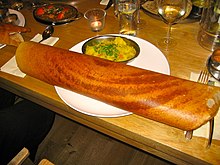 Dosa is the Anglicized name of a variety of South Indian names for the dish, for example dosai in Tamil, dose in Kannada and dosha in Malayalam.

The standard transliterations and pronunciations of the word in various South Indian languages are as follows:

Dosa is high in carbohydrates and contains no added sugars or saturated fats. As its key ingredients are rice and black gram, it is also a good source of protein. [11] One home made plain dosa without oil contains about 112 calories, of which 84% is carbohydrate and 16% protein. [12] The fermentation process increases the vitamin B and vitamin C content. [13] There are instant mix products for making dosa which usually contain higher levels of rice.

A mixture of rice and black gram that has been soaked in water is ground finely to form a batter. Some add a handful of soaked vendhayam fenugreek seeds. The proportion of rice to lentils is generally 3:1 or 4:1. The batter is allowed to ferment overnight, before being mixed with water to get the desired consistency. The batter is then ladled onto a hot tava (griddle) greased with oil or ghee (clarified butter). It is spread out with the base of a ladle or bowl to form a pancake. It can be made either to be thick like a pancake, or thin and crispy. A dosa is served hot, either folded in half or rolled like a wrap. It is usually served with chutney and sambar. The mixture of black grams and rice can be replaced with highly refined wheat flour or semolina.

Dosa can be stuffed with fillings of vegetables and sauces to make a quick meal. They are typically served with a vegetarian side dish which varies according to regional and personal preferences. Common side items are:

The most popular[ citation needed] version is the masala dosa, with a filling of the potato masala. Mysore masala is the spicier version of it. Saada (plain) is without filling; paper dosa is a thin and crisp version. Rava dosa is made crispier using semolina. [15] Newer recipes have been developed that use fusion, like Chinese dosa, cheese dosa, paneer dosa, pizza dosa and many more. [16]

Though dosa typically refers to the version made with rice and lentils, many other versions exist. 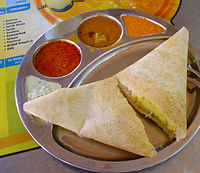 Masala dosa is made by stuffing a dosa with a lightly cooked filling of potatoes, [29] fried onions and spices. The dosa is wrapped around an onion and potato curry or masala.