From Wikipedia
https://en.wikipedia.org/wiki/Corroboree
This article is about a meeting or ceremony of Aboriginal Australian peoples. For other uses, see Corroboree (disambiguation).

A corroboree is a generic word for a meeting of Australian Aboriginal peoples. It may be a sacred ceremony, a festive celebration, or of a warlike character. A word coined by the first British settlers in the Sydney area from a word in the local Dharug language, it usually includes dance, music, costume and often body decoration.

The word "corroboree" was adopted by British settlers soon after colonisation from the Dharug ("Sydney language") Aboriginal Australian word garaabara, denoting a style of dancing. It thus entered the Australian English language as a loan word. [1] 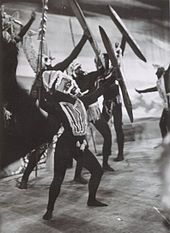 Corroboree, a ballet performance based on the corroboree

It is a borrowed English word that has been reborrowed to explain a practice that is different from ceremony and more widely inclusive than theatre or opera. [2]

In 1837, explorer and Queensland grazier Tom Petrie wrote: "Their bodies painted in different ways, and they wore various adornments, which were not used every day." [3] [4] [5] In 1938, clergyman and anthropologist Adolphus Elkin wrote of a public pan-Aboriginal dancing "tradition of individual gifts, skill, and ownership" as distinct from the customary practices of appropriate elders guiding initiation and other ritual practices (ceremonies). [6]

The word is described in the Macquarie Atlas of Indigenous Australia: Second Edition as "an Indigenous assembly of a festive, sacred or warlike character". [1]

Throughout Australia the word "corroboree" embraces songs, dances, rallies and meetings of various kinds. In the past a corroboree has been inclusive of sporting events and other forms of skill display. [2]

Another description is "a gathering of Aboriginal Australians interacting with the Dreaming through song and dance", which may be a sacred ceremony or ritual, or different types of meetings or celebrations, which differ "from mob to mob". [7]

The Macquarie Dictionary (3rd ed, 1997) gives secondary meanings "any large or noisy gathering" and "a disturbance; an uproar". It also documents its use as a verb (to take part in a corroboree). [8]

The Macquarie Atlas documents a 2003 sports carnival in the Northern Territory which was described by the president of the Yuendumu community council as "a modern day corroboree".[ citation needed]