The Auld Alliance ( Scots for "Old Alliance"; French: Vieille Alliance; Scottish Gaelic: An Seann-chaidreachas) [1] was an alliance made in 1295 between the kingdoms of Scotland and France against England. The Scots word auld, meaning old, has become a partly affectionate term for the long-lasting association between the two countries. Although the alliance was never formally revoked, it is considered by some to have ended with the signing of the Treaty of Edinburgh in 1560. [2]

The alliance played a significant role in the relations among Scotland, France and England during those 265 years. The alliance was renewed by all the French and Scottish monarchs of that period except Louis XI. [3] By the late 14th century, the renewal occurred regardless of whether either kingdom was at war with England at the time. [4]

The alliance began with the treaty signed by John Balliol and Philip IV of France in 1295 against Edward I of England. The terms of the treaty stipulated that if either country were attacked by England, the other country would invade English territory. The 1513 Battle of Flodden, where the Scots invaded England in response to the English campaign against France, was one such occasion. Thomas Randolph, Earl of Moray, negotiated the renewal of the alliance in 1326. The alliance played an important role in the Wars of Scottish Independence, the Hundred Years' War, the War of the League of Cambrai and the War of Rough Wooing.

The dynastic turmoil caused by the death in 1290 of Scotland's seven-year-old queen, Margaret, the Maid of Norway, left Edward I of England with an opportunity to assert his authority over Scotland. In response, the Council of Twelve, which had taken over the government of Scotland temporarily, sought alliances wherever they could be found. Philip IV declared England's possession of Gascony forfeit in 1294, bringing France and England close to war. Alliance with France was a clear course for Scotland to take. In October 1295, a Scottish embassy to Philip agreed to the Treaty of Paris. [5]

As with all subsequent renewals of what became the Auld Alliance, the treaty favoured France. The French were required to do no more than continue their struggle against the English in Gascony. The cost of any war between Scotland and England was to be borne entirely by the Scots. Nevertheless, Scotland, as remote and impoverished as it was, was now aligned to a major European power. Even if they were more symbolic than actual, the benefits of the alliance mattered greatly to Scotland. [6]

In the short term however, the treaty proved to be no protection against Edward, whose swift and devastating invasion of Scotland in 1296 all but eradicated its independence. Furthermore, the cessation of hostilities between England and France in 1299, followed by the treaty of "perpetual peace and friendship," allowed Edward to devote all of his attention and forces to attacking the Scots. In the end, Scotland owed its eventual survival to the military acumen and inspiration of Robert the Bruce and the mistakes of Edward II, rather than to its bond with France.

In 1326, Robert the Bruce renewed the alliance with the Treaty of Corbeil. The motive for this renewal was precautionary: neither realm seemed to have much to fear from England at the time. However, this changed after 1330, when Edward III set out to complete his conquest of Scotland and to reassert his power in France. For the first time, the Franco-Scottish alliance acquired a sense of emergency.

In 1346, Edward overwhelmed French forces at the Battle of Crécy. Two months later, David II of Scotland was captured at the Battle of Neville's Cross, during a botched invasion of Northern England. His 11-year absence as Edward's prisoner only increased the internal turmoil and power struggles of Scotland. David II was forced to make a deal with Edward III to gain his freedom. Even after his release in 1357, David spent most of the remaining years of his reign to further English interests in Scotland. [6]

The accession of pro-French Robert II led to immediate renewal in 1371, with the embassy of the Bishop of Glasgow and the Lord of Galloway to France. The treaty was signed by Charles V at the Château de Vincennes on 30 June, and at Edinburgh Castle by Robert II on 28 October. [7] The benefits to Scotland were mixed. In 1385, plans were drawn up for a Franco-Scottish invasion of England. This included dispatching a small French force to Scotland, for the first time. These plans were never acted on: The French invasion failed to materialise. The deteriorating relations between France and Scotland were summed up by the French Chronicler Jean Froissart when he "wished the King of France would make a truce with the English for two or three years and then march to Scotland and utterly destroy it". [8]

However, necessity had driven the two kingdoms together and the need to resist aggressive new Lancastrian Kings kept the alliance together in the 15th century. In 1418, with France on the brink of surrendering to the forces of Henry V, the Dauphin, Charles VII, called on his Scottish allies for help. Between 1419 and 1424, as many as 15,000 Scottish troops were sent to France. [9] [10]

French and Scottish forces together won against the English at the Battle of Baugé in 1421. It marked the turning point of the Hundred Years War, but the victory was short-lived for Scotland. The Scots army was defeated at Verneuil in 1424. Despite this defeat, the Scots had given France a valuable breathing space, effectively ensuring the continued power of the French state. [6]

In 1429, Scots came to the aid of Joan of Arc in her famous relief of Orléans. Scottish soldiers also served in the Garde Écossaise, the loyal bodyguard of the French crown. Many members of the Scottish expeditions to France chose to settle there. Some officers were granted lands and titles in France. In the 15th and 16th centuries, they became naturalised French subjects. [3]

Through the rest of the 15th century, the alliance was formally renewed four times. [6] The eventual victory of France in the Hundred Years War, combined with the turmoil in England following the Wars of the Roses, meant that the English threat was greatly reduced, thus rendering the alliance almost obsolete. However, it did not stop the Auld Alliance from taking part in the war and attacking many of England's strongholds and possessions, such as Jersey to France and Berwick-On-Tweed to Scotland in exchange for helping to support the Lancastrians against the Yorkists during the war. The Yorkists won and managed to regain those lost possessions, but the allies continued to support the Lancastrians against Yorkist domination, including the last Lancastrian, Henry VII, victor in the Battle of Bosworth Field in 1485. As the XVI century began, the marriage of Henry VII's eldest daughter, Margaret Tudor, to James IV of Scotland and his younger daughter, Mary Tudor to Louis XII of France, as a sign of peace from England, appeared to have finally ended the Franco-Scottish alliance for good.

It underwent a dramatic revival when it was formally reviewed in 1512 and again in 1517 and 1548. Scotland still suffered badly following the death of James IV and most of his nobles at Flodden in 1513. Periodic Anglo-French and Anglo-Scottish conflict throughout the 15th century continued, but the certainties that had driven the Auld Alliance were disappearing. As Protestantism gained ground in Scotland, more and more people favoured closer links with England than with France. [6] 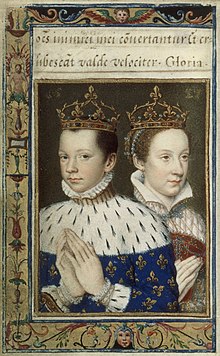 The marriage of Mary, Queen of Scots with Francis II of France briefly revived the Auld Alliance

In 1558, the alliance between the two kingdoms was revived with the marriage of Mary, Queen of Scots to the future Francis II of France, but it lasted only until 1560 when Francis died prematurely. [11] After Mary's exile to England in 1568, Scotland was transformed in to a Protestant nation by its new king, James VI, who was also heir to the English throne. His desire to form close ties with England meant that the alliance had outlived its usefulness. In the 1560s, after more than 250 years, formal treaties between Scotland and France were officially ended by the Treaty of Edinburgh. [12] With the Scottish Reformation, Scotland was declared Protestant, and allied itself with Protestant England instead. During the Reformation, the Protestant Lords of the Congregation rejected the Auld Alliance and brokered English military support with their treaty of Berwick, aimed against the French Regent Mary of Guise. Two hundred Scottish soldiers were sent to Normandy in 1562 to aid the French Huguenots in their struggle against royal authority during the French Wars of Religion. The Garde Écossaise, however, continued to protect the kings of France until 1830, when Charles X of France abdicated.

The Auld Alliance extended into the lives of the Scottish population in a number of ways, affecting architecture, law, the Scots language and cuisine, among other things. Scottish soldiers served within the French army; there were reciprocal dual nationality agreements; [13] and France granted privileges to Scottish vintners. [13] Many Scots studied at French universities, something which continued up until the Napoleonic Wars. [14] David de Moravia, Bishop of Moray, helped found the Scots College of the University of Paris and among those who studied or taught at French Universities were: the poets John Barbour and George Buchanan; the historian Hector Boece; the founder of St Andrews University, Henry Wardlaw; the founder of Aberdeen University, William Elphinstone; the founder of the Advocates Library, George Mackenzie, and the noted translator of Rabelais, Sir Thomas Urquhart. Scottish castles built with French construction in mind include Bothwell and Kildrummy.

In a speech which he delivered in Edinburgh in June 1942, Charles de Gaulle described the alliance between Scotland and France as "the oldest alliance in the world". He also declared that: [15]

"In every combat where for five centuries the destiny of France was at stake, there were always men of Scotland to fight side by side with men of France, and what Frenchmen feel is that no people has ever been more generous than yours with its friendship."

In 1995, celebrations were held in both countries marking the 700th anniversary of the beginning of the alliance. [4]


In 2011, the University of Manchester announced the planned publication of a paper by British historian Siobhan Talbott. After extensive research, Talbott concluded that the Auld Alliance had never been formally revoked and that it endured and thrived long after the Acts of Union in 1707 and the Entente Cordiale of 1906. [16] The paper may be requested through Talbott's page at Keele University. [17]