In astronomy, the zero point in a photometric system is defined as the magnitude of an object that produces 1 count per second on the detector. [1] The zero point is used to calibrate a system to the standard magnitude system, as the flux detected from stars will vary from detector to detector. [2] Traditionally, Vega is used as the calibration star for the zero point magnitude in specific pass bands (U, B, and V), although often, an average of multiple stars is used for higher accuracy. [3] It is not often practical to find Vega in the sky to calibrate the detector, so for general purposes, any star may be used in the sky that has a known apparent magnitude. [4] 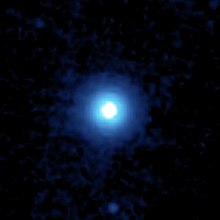 Vega, the star typically used as the zero point in photometric systems

Under most circumstances, Vega is used as the zero point, but in reality, an elaborate "bootstrap" system is used to calibrate a detector. [3] [5] The calibration typically takes place through extensive observational photometry as well as the use of theoretical atmospheric models. [5]