From Wikipedia, the free encyclopedia
Species of penguin

The yellow-eyed penguin (Megadyptes antipodes), known also as hoiho or tarakaka, is a species of penguin endemic to New Zealand. [2] [3]

The species breeds along the eastern and south-eastern coastlines of the South Island of New Zealand, as well as Stewart Island, Auckland Islands, and Campbell Islands. Colonies on the Otago Peninsula are a popular tourist venue, where visitors may closely observe penguins from hides, trenches, or tunnels.

On the New Zealand mainland, the species has experienced a significant decline over the past 20 years. On the Otago Peninsula, numbers have dropped by 75% since the mid-1990s and population trends indicate the possibility of local extinction in the next 20 to 40 years. While the effect of rising ocean temperatures is still being studied, an infectious outbreak in the mid 2000s played a large role in the drop. Human activities at sea (fisheries, pollution) may have an equal if not greater influence on the species' downward trend. [4]

The yellow-eyed penguin was first described by Jacques Bernard Hombron and Honoré Jacquinot in 1841.

The yellow-eyed penguin is the sole extant species in the genus Megadyptes. A smaller, recently extinct species, the Waitaha penguin (M. waitaha), was described in 2009. [5] A 2019 study recommended classifying the Waitaha penguin as M. a. waitaha, a subspecies of the extant yellow-eyed penguin. [6] The same 2019 study described M. a. richdalei, a recently extinct dwarf subspecies from the Chatham Islands. [6]

It was previously thought closely related to the little penguin but new molecular research has shown it is more closely related to penguins of the genus Eudyptes. Mitochondrial and nuclear DNA evidence suggests it split from the ancestors of Eudyptes around 15 million years ago. In 2019 the 1.25Gb genome of the species was published as part of the Penguin Genome Consortium, [7] [8] and this will help resolve the origins and aid conservation by helping to inform any future breeding programmes.

The yellow-eyed penguin is most easily identified by the band of pale yellow feathers surrounding its eyes and encircling the back of its head. [9] Its forehead, crown and the sides of its face are slate grey flecked with golden yellow. [10] Its eye is yellow. [2] [9] The foreneck and sides of the head are light brown. [2] The back and tail are slate blue-black. [2] [10] Its chest, stomach, thighs and the underside of its flippers are white in colour. [2]

Juvenile birds have a greyer head with no yellow band around their eyes. [9]

The yellow-eyed penguin may be long lived, with some individuals reaching 20 years of age. Males are generally longer lived than females, leading to a sex ratio of 2:1 around the age of 10–12 years. [15]

The yellow-eyed penguin is mostly silent. [2] It makes a shrill bray-like call at nest and breeding sites. [3] 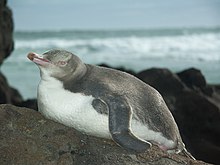 Juvenile in The Catlins, New Zealand

Today, yellow-eyed penguins are found in two distinct populations, known as the northern and southern populations. [18]

The northern population extends along the southeast coast of the South Island of New Zealand, down to Stewart Island and Codfish Island. [2] It includes four main breeding areas in Banks Peninsula, North Otago, Otago Peninsula and the Catlins. It may also be referred to as the mainland population. [3]

There is little gene flow between the northern and southern populations as the large stretch of ocean between the South Island and Subantarctic region and the subtropical convergence act as a natural barrier. [19]

Around 90% of the yellow-eyed penguin's diet is made up of fish, chiefly demersal species that live near the seafloor, including silversides (Argentina elongata), blue cod (Parapercis colias), red cod (Pseudophycis bachus), and opalfish (Hemerocoetes monopterygius). [20] [21] Other species taken are New Zealand blueback sprat (Sprattus antipodum) and cephalopods such as arrow squid ( Nototodarus sloanii). However, they also eat some crustaceans, including krill ( Nyctiphanes australis). [22] Recently, jellyfish were found to be targeted by the penguins. While initially thought that the birds would prey on jellyfish itself, [23] deployments of camera loggers revealed that the penguins were going after juvenile fish and fish larvae associated with jellyfish. [24]

Breeding penguins usually undertake two kinds of foraging trips: day trips where the birds leave at dawn and return in the evening ranging up to 25 km from their colonies, and shorter evening trips during which the birds are seldom away from their nest longer than four hours or range farther than 7 km. [25] Yellow-eyed penguins are known to be an almost exclusive benthic forager that searches for prey along the seafloor. Accordingly, up to 90% of their dives are benthic dives. [25] This also means that their average dive depths are determined by the water depths within their home ranges. [26] 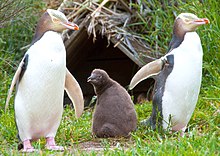 A family of yellow-eyed penguin at the Penguin Place Lodge at Otago Peninsula, Dunedin, New Zealand

Whether yellow-eyed penguins are colonial nesters has been an ongoing point of debate among zoologists in New Zealand. Most Antarctic penguin species nest in large, high density aggregations of birds; in contrast, yellow-eyed penguins do not nest within sight of each other. While they can be seen coming ashore in groups of four to six or more individuals, they then disperse along tracks to individual nest sites up to one kilometre inland. [27] [28] Accordingly, the consensus among New Zealand penguin workers is to use habitat rather than colony to refer to areas where yellow-eyed penguins nest.

Nest sites are selected in August and normally two eggs are laid in September. The incubation duties (lasting 39–51 days) are shared by both parents, who may spend several days on the nest at a time. For the first six weeks after hatching, the chicks are guarded during the day by one parent while the other is at sea feeding. The foraging adult returns at least daily to feed the chicks and relieve the partner.

After the chicks are six weeks of age, both parents go to sea to supply food to their rapidly growing offspring. Chicks usually fledge in mid-February and are totally independent from then on. Chick fledge weights are generally between 5 and 6 kg.

First breeding occurs at three to four years of age and long-term partnerships are formed.

The yellow-eyed penguin is considered one of the rarest penguin species in the world. [29] It is listed on the IUCN Red List as being endangered. It was first included on the list in 1988 when it was listed as threatened. Its status has since been changed to endangered in the year 2000. [30]

It had an estimated population of 4000 in 2007. The main threats include habitat degradation and introduced predators. It may be the most ancient of all living penguins. [31]

A reserve protecting more than 10% of the mainland population was established at Long Point in the Catlins in November 2007 by the Department of Conservation and the Yellow-eyed Penguin Trust. [32] [33]

In August 2010, the yellow-eyed penguin was granted protection under the U.S. Endangered Species Act. [34] 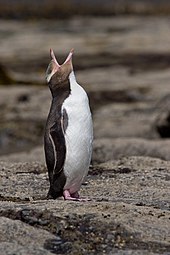 In spring 2004, a previously undescribed disease killed off 60% of yellow-eyed penguin chicks on the Otago peninsula and in North Otago. The disease has been linked to an infection of Corynebacterium, a genus of bacteria that also causes diphtheria in humans. It has been described as diphtheritic stomatitis and the pathogen identified. [35] A similar problem has affected the Stewart Island population. [36] Treatment of chicks in hospital has proven successful with 88% of 41 chicks treated in 2022 surviving. [37]

Several mainland habitats have hides and are relatively accessible for those wishing to watch the birds come ashore. These include beaches at Oamaru, the Moeraki lighthouse, a number of beaches near Dunedin, and the Catlins. In addition, commercial tourist operations on Otago Peninsula also provide hides to view yellow-eyed penguins. However, the yellow-eyed penguin cannot be found in zoos because it will not reproduce in captivity. [38]