Audacity is a free and open-source digital audio editor and recording application software, available for Windows, macOS, Linux, and other Unix-like operating systems. [4] [5] The project was started in the fall of 1999 by Dominic Mazzoni and Roger Dannenberg at Carnegie Mellon University, and released on May 28, 2000, as version 0.8. [8] [9]

As of December 6, 2022, Audacity is the most popular download at FossHub, [10] with over 114.2 million downloads since March 2015. It was previously served from Google Code and SourceForge, where it was downloaded over 200 million times.

In 2019, then-lead developer James Crook started the fork DarkAudacity to experiment with a new look and other UX changes. [13] Most of its changes were eventually incorporated into the mainline version and the fork ended. [14]

In April 2021, it was announced that Muse Group (owners of MuseScore and Ultimate Guitar) would acquire the Audacity trademark and continue to develop the application, which remains free and open source. [15]

In addition to recording audio from multiple sources, Audacity can be used for post-processing of all types of audio, including effects such as normalization, trimming, and fading in and out. [16] It has been used to record and mix entire albums, such as by Tune-Yards. [17] It is currently used in the Sound Creation unit of the UK OCR National Level 2 ICT course.

In April 2022, an official Audacity app was added to the Microsoft Store. [54]

The documentation, the Audacity Manual, is available only in English. [59] The Audacity Forum offers technical support in Spanish, French, Russian and German. 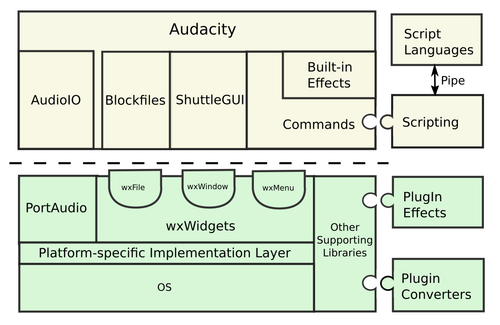 The diagram illustrates Audacity's layers and modules. Note the three important classes within wxWidgets, each of which has a reflection in Audacity.

Higher-level abstractions result from related lower-level ones. For example, the BlockFile system is a reflection of and is built on wxWidgets' wxFiles. Lower down in the diagram is a narrow strip for platform-specific implementation layers.

Both wxWidgets and PortAudio are OS abstraction layers, containing conditional code that chooses different implementations depending on the target platform.

As free and open-source software, Audacity is very popular in education, encouraging its developers to make the user interface easier for students and teachers. [60]

Jamie Lendino of PC Magazine recently rated it 4/5 stars Excellent and said, "If you're looking to get started in podcasting or recording music, it's tough to go wrong with Audacity. A powerful, free, open-source audio editor that's been available for years, Audacity is still the go-to choice for quick-and-dirty audio work." [61]

In The Art of Unix Programming (2003), open-source software advocate Eric S. Raymond wrote of Audacity, "The central virtue of this program is that it has a superbly transparent and natural user interface, one that erects as few barriers between the user and the sound file as possible." [65]

Some reviewers and users have criticized Audacity for its inconvenient UX design, unsightly GUI and comparative lack of features compared with Adobe Audition. Matthew McLean wrote "Audacity looks a bit more dated and basic, but this will be appealing to many folks who’re just starting out". [66] [67]

In May 2021, after the project was acquired by Muse Group, [68] there was a draft proposal to add opt-in telemetry to the code to record application usage. Some users responded negatively, with accusations of turning Audacity into spyware and also violating the GPL by adding an age restriction. [69] The company reversed course, falling back to error/crash reporting and optional update checking instead. [70] Another controversy in July 2021 [71] resulted from a change to the privacy policy which said that although personal data was stored on servers in the European Economic Area, the program would "occasionally [be] required to share your personal data with our main office in Russia and our external counsel in the USA". [72] That July, the Audacity team apologized for the changes to the privacy policy and removed mention of the data storage provision which was added "out of an abundance of caution." [71]