From Wikipedia
https://en.wikipedia.org/wiki/XOR_gate
Logic gate
This article is about XOR digital logic gate (e.g. SN7486 or CD4030B). For XOR logical operation, see Exclusive or. For other uses, see XOR (disambiguation).

XOR gate (sometimes EOR, or EXOR and pronounced as Exclusive OR) is a digital logic gate that gives a true (1 or HIGH) output when the number of true inputs is odd. An XOR gate implements an exclusive or (

) from mathematical logic; that is, a true output results if one, and only one, of the inputs to the gate is true. If both inputs are false (0/LOW) or both are true, a false output results. XOR represents the inequality function, i.e., the output is true if the inputs are not alike otherwise the output is false. A way to remember XOR is "must have one or the other but not both".

XOR can also be viewed as addition modulo 2. As a result, XOR gates are used to implement binary addition in computers. A half adder consists of an XOR gate and an AND gate. Other uses include subtractors, comparators, and controlled inverters. [1]

all represent the XOR gate with inputs A and B. The behavior of XOR is summarized in the truth table shown on the right.

There are three schematic symbols for XOR gates: the traditional ANSI and DIN symbols and the IEC symbol. In some cases, the DIN symbol is used with ⊕ instead of ≢. For more information see Logic Gate Symbols.

The logic symbols ⊕, Jpq, and ⊻ can be used to denote an XOR operation in algebraic expressions.

C-like languages use the caret symbol ^ to denote bitwise XOR. (Note that the caret does not denote logical conjunction (AND) in these languages, despite the similarity of symbol.)

The XOR gate is most commonly implemented using MOSFETs circuits. Some of those implementations include:

The Complementary metal–oxide–semiconductor ( CMOS) implementation of the XOR gate. 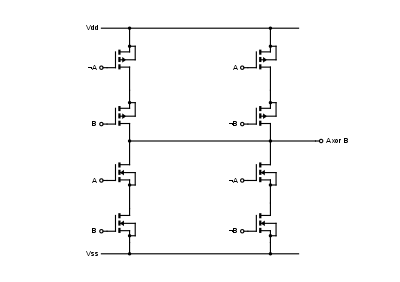 activate each one of the two nMOS paths in the bottom to Vss for a logic low. [2]

This is a twelve transistor implementation since two additional inverters with two gates each, not shown in the diagram, are needed to generate

The XOR gate can also be implemented by the use of Transmission gates with pass transistor logic. 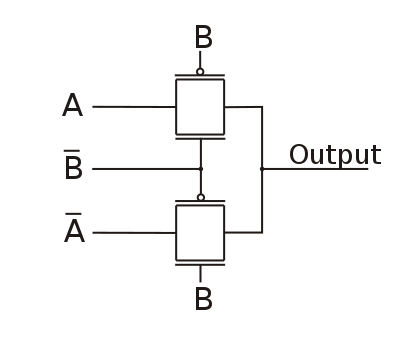 for a total of eight transistors, four less than in the previous design. The XOR function is implemented by passing through to the output the inverted value of A when B is high and passing the value of A when B is at a logic low. so when both inputs are low the transmission gate at the bottom is off and the one at the top is on and lets A through which is low so the output is low. When both are high only the one at the bottom is active and lets the inverted value of A through and since A is high the output will again be low. Similarly if B stays high but A is low the output would be

which is high as expected and if B is low but A is high the value of A passes through and the output is high completing the truth table for the XOR gate. [3]

The trade-off with the previous implementation is that since transmission gates are not an ideal switches, there is resistance associated with them, so depending on the signal strength of the input, cascading them may degrade the output levels. [4]

instead of Vdd and the source of the nMOS connected to 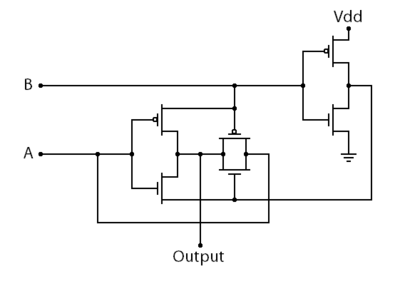 used by the transmission gate and the pass transistor logic circuit. [5]

As with the previous implementation, the direct connection of the inputs to the outputs through the pass gate transistors or thru the two leftmost transistors, should be taken into account, specially when cascading them. [4]

, we can construct an XOR gate circuit directly using AND, OR and NOT gates. However, this approach requires five gates of three different kinds.

As alternative, if different gates are available we can apply Boolean algebra to transform

as stated above, and apply de Morgan's Law to the last term to get

An XOR gate circuit can be made from four NAND gates. In fact, both NAND and NOR gates are so-called "universal gates" and any logical function can be constructed from either NAND logic or NOR logic alone. If the four NAND gates are replaced by NOR gates, this results in an XNOR gate, which can be converted to an XOR gate by inverting the output or one of the inputs (e.g. with a fifth NOR gate).

, noting from de Morgan's Law that a NOR gate is an inverted-input AND gate. Another alternative arrangement is of five NAND gates in a topology that emphasizes the construction of the function from

, noting from de Morgan's Law that a NAND gate is an inverted-input OR gate.

XOR chips are readily available. The most common standard chip codes are:

Literal interpretation of the name "exclusive or", or observation of the IEC rectangular symbol, raises the question of correct behaviour with additional inputs. If a logic gate were to accept three or more inputs and produce a true output if exactly one of those inputs were true, then it would in effect be a one-hot detector (and indeed this is the case for only two inputs). However, it is rarely implemented this way in practice.

It is most common to regard subsequent inputs as being applied through a cascade of binary exclusive-or operations: the first two signals are fed into an XOR gate, then the output of that gate is fed into a second XOR gate together with the third signal, and so on for any remaining signals. The result is a circuit that outputs a 1 when the number of 1s at its inputs is odd, and a 0 when the number of incoming 1s is even. This makes it practically useful as a parity generator or a modulo-2 adder.

For example, the 74LVC1G386 microchip is advertised as a three-input logic gate, and implements a parity generator. [8]

XOR gates and AND gates are the two most-used structures in VLSI applications. [9]

The XOR logic gate can be used as a one-bit adder that adds any two bits together to output one bit. For example, if we add 1 plus 1 in binary, we expect a two-bit answer, 10 (i.e. 2 in decimal). Since the trailing sum bit in this output is achieved with XOR, the preceding carry bit is calculated with an AND gate. This is the main principle in Half Adders. A slightly larger Full Adder circuit may be chained together in order to add longer binary numbers.

In certain situations, the inputs to an OR gate (for example, in a full-adder) or to an XOR gate can never be both 1's. As this is the only combination for which the OR and XOR gate outputs differ, an OR gate may be replaced by an XOR gate (or vice versa) without altering the resulting logic. This is convenient if the circuit is being implemented using simple integrated circuit chips which contain only one gate type per chip.

XOR gates produce a 0 when both inputs match. When searching for a specific bit pattern or PRN sequence in a very long data sequence, a series of XOR gates can be used to compare a string of bits from the data sequence against the target sequence in parallel. The number of 0 outputs can then be counted to determine how well the data sequence matches the target sequence. Correlators are used in many communications devices such as CDMA receivers and decoders for error correction and channel codes. In a CDMA receiver, correlators are used to extract the polarity of a specific PRN sequence out of a combined collection of PRN sequences.

A correlator looking for 11010 in the data sequence 1110100101 would compare the incoming data bits against the target sequence at every possible offset while counting the number of matches (zeros):

In this example, the best match occurs when the target sequence is offset by 1 bit and all five bits match. When offset by 5 bits, the sequence exactly matches its inverse. By looking at the difference between the number of ones and zeros that come out of the bank of XOR gates, it is easy to see where the sequence occurs and whether or not it is inverted. Longer sequences are easier to detect than short sequences.

is an analytical representation of XOR gate:

is an alternative analytical representation.