From Wikipedia
https://en.wikipedia.org/wiki/Word_processor
Device or computer program used for writing and editing documents 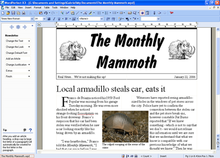 WordPerfect, a word processor first released for minicomputers in 1979 and later ported to microcomputers, running on Windows XP

LibreOffice Writer, one of the most popular free and open-source word processors

A word processor (WP) [1] [2] is a device or computer program that provides for input, editing, formatting, and output of text, often with some additional features.

The functions of a word processor program fall somewhere between those of a simple text editor and a fully functioned desktop publishing program. However, the distinctions between these three have changed over time and were unclear after 2010. [3] [4]

Word processors did not develop out of computer technology. Rather, they evolved from mechanical machines and only later did they merge with the computer field. [5] The history of word processing is the story of the gradual automation of the physical aspects of writing and editing, and then to the refinement of the technology to make it available to corporations and Individuals.

The term word processing appeared in American offices in early 1970s centered on the idea of streamlining the work to typists, but the meaning soon shifted toward the automation of the whole editing cycle.

At first, the designers of word processing systems combined existing technologies with emerging ones to develop stand-alone equipment, creating a new business distinct from the emerging world of the personal computer. The concept of word processing arose from the more general data processing, which since the 1950s had been the application of computers to business administration. [6]

Through history, there have been three types of word processors: mechanical, electronic and software.

The first word processing device (a "Machine for Transcribing Letters" that appears to have been similar to a typewriter) was patented by Henry Mill for a machine that was capable of "writing so clearly and accurately you could not distinguish it from a printing press". [7] More than a century later, another patent appeared in the name of William Austin Burt for the typographer. In the late 19th century, Christopher Latham Sholes [8] created the first recognizable typewriter although it was a large size, which was described as a "literary piano". [9]

The only "word processing" these mechanical systems could perform was to change where letters appeared on the page, to fill in spaces that were previously left on the page, or to skip over lines. It was not until decades later that the introduction of electricity and electronics into typewriters began to help the writer with the mechanical part. The term “word processing” (translated from the German word Textverarbeitung) itself was created in the 1950s by Ulrich Steinhilper, a German IBM typewriter sales executive. However, it did not make its appearance in 1960s office management or computing literature (an example of grey literature), though many of the ideas, products, and technologies to which it would later be applied were already well known. Nonetheless by 1971 the term was recognized by the New York Times [10] as a business " buzz word". Word processing paralleled the more general "data processing", or the application of computers to business administration.

Thus by 1972 discussion of word processing was common in publications devoted to business office management and technology, and by the mid-1970s the term would have been familiar to any office manager who consulted business periodicals.

By the late 1960s, IBM had developed the IBM MT/ST (Magnetic Tape/Selectric Typewriter). This was a model of the IBM Selectric typewriter from the earlier part of this decade, but it came built into its own desk, integrated with magnetic tape recording and playback facilities along with controls and a bank of electrical relays. The MT/ST automated word wrap, but it had no screen. This device allowed a user to rewrite text that had been written on another tape, and it also allowed limited collaboration in the sense that a user could send the tape to another person to let them edit the document or make a copy. It was a revolution for the word processing industry. In 1969, the tapes were replaced by magnetic cards. These memory cards were inserted into an extra device that accompanied the MT/ST, able to read and record users' work.

In the early 1970s, word processing began to slowly shift from glorified typewriters augmented with electronic features to become fully computer-based (although only with single-purpose hardware) with the development of several innovations. Just before the arrival of the personal computer (PC), IBM developed the floppy disk. In the early 1970s, the first word-processing systems appeared which allowed display and editing of documents on CRT screens.

During this era, these early stand-alone word processing systems were designed, built, and marketed by several pioneering companies. Linolex Systems was founded in 1970 by James Lincoln and Robert Oleksiak. Linolex based its technology on microprocessors, floppy drives and software. It was a computer-based system for application in the word processing businesses and it sold systems through its own sales force. With a base of installed systems in over 500 sites, Linolex Systems sold 3 million units in 1975 — a year before the Apple computer was released. [11]

At that time, the Lexitron Corporation also produced a series of dedicated word-processing microcomputers. Lexitron was the first to use a full-sized video display screen (CRT) in its models by 1978. Lexitron also used 51⁄4 inch floppy diskettes, which became the standard in the personal computer field. The program disk was inserted in one drive, and the system booted up. The data diskette was then put in the second drive. The operating system and the word processing program were combined in one file. [12]

Another of the early word processing adopters was Vydec, which created in 1973 the first modern text processor, the “Vydec Word Processing System”. It had built-in multiple functions like the ability to share content by diskette and print it.[ further explanation needed] The Vydec Word Processing System sold for $12,000 at the time, (about $60,000 adjusted for inflation). [13]

The Redactron Corporation (organized by Evelyn Berezin in 1969) designed and manufactured editing systems, including correcting/editing typewriters, cassette and card units, and eventually a word processor called the Data Secretary. The Burroughs Corporation acquired Redactron in 1976. [14]

A CRT-based system by Wang Laboratories became one of the most popular systems of the 1970s and early 1980s. The Wang system displayed text on a CRT screen, and incorporated virtually every fundamental characteristic of word processors as they are known today. While early computerized word processor system were often expensive and hard to use (that is, like the computer mainframes of the 1960s), the Wang system was a true office machine, affordable to organizations such as medium-sized law firms, and easily mastered and operated by secretarial staff.

The phrase "word processor" rapidly came to refer to CRT-based machines similar to Wang's. Numerous machines of this kind emerged, typically marketed by traditional office-equipment companies such as IBM, Lanier (AES Data machines - re-badged), CPT, and NBI. All were specialized, dedicated, proprietary systems, with prices in the $10,000 range. Cheap general-purpose personal computers were still the domain of hobbyists.

In Japan, even though typewriters with Japanese writing system had widely been used for businesses and governments, they were limited to specialists who required special skills due to the wide variety of letters, until computer-based devices came onto the market. In 1977, Sharp showcased a prototype of a computer-based word processing dedicated device with Japanese writing system in Business Show in Tokyo. [15] [16] 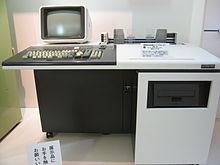 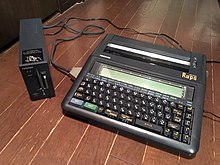 The Japanese writing system uses a large number of kanji (logographic Chinese characters) which require 2 bytes to store, so having one key per each symbol is infeasible. Japanese word processing became possible with the development of the Japanese input method (a sequence of keypresses, with visual feedback, which selects a character) -- now widely used in personal computers. Oki launched OKI WORD EDITOR-200 in March 1979 with this kana-based keyboard input system. In 1980 several electronics and office equipment brands entered this rapidly growing market with more compact and affordable devices. While the average unit price in 1980 was 2,000,000 JPY (US$14,300), it was dropped to 164,000 JPY (US$1,200) in 1985. [19] Even after personal computers became widely available, Japanese word processors remained popular as they tended to be more portable (an "office computer" was initially too large to carry around), and become necessities in business and academics, even for private individuals in the second half of the 1980s. [20] The phrase "word processor" has been abbreviated as "Wa-pro" or "wapuro" in Japanese.

The final step in word processing came with the advent of the personal computer in the late 1970s and 1980s and with the subsequent creation of word processing software. Word processing software that would create much more complex and capable output was developed and prices began to fall, making them more accessible to the public. By the late 1970s, computerized word processors were still primarily used by employees composing documents for large and midsized businesses (e.g., law firms and newspapers). Within a few years, the falling prices of PCs made word processing available for the first time to all writers in the convenience of their homes.

The first word processing program for personal computers ( microcomputers) was Electric Pencil, from Michael Shrayer Software, which went on sale in December 1976. In 1978 WordStar appeared and because of its many new features soon dominated the market. However, WordStar was written for the early CP/M (Control Program–Micro) operating system, and by the time it was rewritten for the newer MS-DOS (Microsoft Disk Operating System), it was obsolete. WordPerfect dominated the word processing programs during the DOS era, there was a large variety of less successful programs.

Most early word processing software required users to memorize semi-mnemonic key combinations rather than pressing keys such as "copy" or "bold". Moreover, CP/M lacked cursor keys; for example WordStar used the E-S-D-X-centered "diamond" for cursor navigation. However, the price differences between dedicated word processors and general-purpose PCs, and the value added to the latter by software such as “ killer app” spreadsheet applications, e.g. VisiCalc and Lotus 1-2-3, were so compelling that personal computers and word processing software became serious competition for the dedicated machines and soon dominated the market.

Then in the late 1980s innovations such as the advent of laser printers, a "typographic" approach to word processing ( WYSIWYG - What You See Is What You Get), using bitmap displays with multiple fonts (pioneered by the Xerox Alto computer and Bravo word processing program), and graphical user interfaces such as “copy and paste” (another Xerox PARC innovation, with the Gypsy word processor). These were popularized by MacWrite on the Apple Macintosh in 1983, and Microsoft Word on the IBM PC in 1984. These were probably the first true WYSIWYG word processors to become known to many people. Of particular interest also is the standardization of TrueType fonts used in both Macintosh and Windows PCs. While the publishers of the operating systems provide TrueType typefaces, they are largely gathered from traditional typefaces converted by smaller font publishing houses to replicate standard fonts. Demand for new and interesting fonts, which can be found free of copyright restrictions, or commissioned from font designers, occurred.

The growing popularity of the Windows operating system in the 1990s later took Microsoft Word along with it. Originally called "Microsoft Multi-Tool Word", this program quickly became a synonym for “word processor”.

From early in the 21st century Google Docs popularized the transition to online or offline web browser based word processing, this was enabled by the widespread adoption of suitable internet connectivity in businesses and domestic households and later the popularity of smartphones. Google Docs enabled word processing from any physical device type including tablets and smartphones, further, these devices could now also run any vendors operating system with a large variety of vendors web browsers, although offline editing is limited to a few Chromium based web browsers. Google Docs also enabled the significant growth of use of information technology such as remote access to files and collaborative real-time editing, both becoming simple to do with little or no need for costly software and specialist IT support.

Look up word processor in Wiktionary, the free dictionary.