From Wikipedia, the free encyclopedia
City in Washington, United States

Woodland is a city in Clark and Cowlitz counties in the State of Washington. Most residents live within Cowlitz County, in which the majority of the city lies. It is part of the ' Longview, Washington Metropolitan Statistical Area'. The population was 6,531 at the 2020 census. [2]

Named for its wooded setting by Christopher Columbus Bozarth, the community's first merchant and postmaster, at the suggestion of his wife. Identically or similarly named unincorporated communities (without post offices) with the same name source exist in Pierce, Snohomish, Island, and Grays Harbor counties. [4]

Hudson's Bay Company retiree Adolphous Le Lewes (alternate spelling: Lewis) established a homestead at the mouth of what is today known as the Lewis River, in 1849 (The Lewis River is the namesake of A. Le Lewes, not Meriwether Lewis as is generally believed). Two Iowa families, related by marriage, came next: the Solomon Strongs filed a claim in September 1850 and the Squire Bozarths filed a claim in December of the same year. Bozarth built the first frame house in present-day Woodland and named it "Woodland Farm House." Other early settlers include Columbia Lancaster, Milly Bozarth (wife of Squire), McKenzie and Jane Caples, and Brandt and Hans Kraft. After a few years, Christopher Columbus Bozarth (Better known as C.C., [5] and the namesake for C.C. street in Woodland), a son of Squire Bozarth, opened a store and named it "Woodland," after his father's farm. Woodland eventually grew on the spot where the store was located. [6]

Woodland was not the first trading center on the Lewis River bottoms. Pekin (now known as part of the Woodland Bottoms) deserves that credit. The Pekin store and Post Office was established in 1867 or 1868 by James Woods and F.H. Marsh. Pekin continued as the trading center until the Woodland store and Post Office were established. Woodland was more centrally located and on higher ground. Rarely did the June floods cover the streets of Woodland, but Pekin, built on stilts, was flooded nearly every June. [7]

On March 26, 1856, the only recorded Indian attack occurred when some members of the Yakima tribe came down to burn out the settlers. Indian Zack, one of the few surviving Cowlitz tribe members, had already warned the settlers who evacuated to the Block House in St. Helens until the Yakimas returned to east of the Cascade Mountains. [5] There was previously a monument to Indian Zack at a water fountain at Horseshoe Lake Park.

Woodland was platted by A.W. Scott on October 14, 1889, the same year that Washington gained statehood. It was incorporated as a town in 1906, and L. Hopf was the first mayor. In 1907, the first sewer system was begun, and the first telephone service contract was granted to Northwestern Telephone. At that time, there were daily stops by the steamers the Alarm and the Lucy Mason, as well as railroad service from Kalama to Portland. In 1913, the Lewis River bridge was built at Woodland. Prior to that time, there was only ferry service across the river. The present bridges where Interstate 5 crosses the Lewis, and the dike creating Horseshoe Lake were begun in 1940. In 1925, the Woodland Fire Department was organized and a fire station was erected. [5] The first hotels and restaurants were built in the 1890s. The Woodland Grange now occupies the building that was the Hobb Hotel. [5]

In 1948, Woodland experienced one of the greatest floods in its short history, with "Old Town Woodland" being one of the hardest-hit areas. [8] Woodland experienced another great flood in 1996, which mostly affected the Northeast residential section of the city. President Bill Clinton visited the city during the flood of 1996, using the Woodland High School football field as a landing pad for his helicopter.

Woodland was officially incorporated as a city on March 27, 1906.

Woodland is perhaps best known as the home of Hulda Klager (1863–1960), who was a prolific breeder of lilacs. Known as the "Lilac Lady," Klager (née Thiel) was long the pride of Woodland. She immigrated from Germany to Wisconsin in 1865, when she was just two years old, and came West when her family bought a farm in Woodland. Later she married and settled down on the family farm. When a friend gave her a book about Luther Burbank, she began creating flowers, hybridizing new varieties of roses, dahlias, even apples, and lilacs in particular. By 1920 she had created such a magnificent array of new hand-pollinated lilacs that she opened her garden on Lilac Week every spring for visitors. [9] The floodwaters of 1948 rolled over her garden, destroying every shrub and hand-pollinated lilac. The loss grieved those who visited her garden or who had purchased her lilacs. From all over the Northwest, people sent starts of her lilacs from their own gardens. By 1950, at the age of eighty-seven, Klager, who loved flowers and who had been honored by the state of Washington as well as such organizations as the nationally famous arboretum at Cambridge, Massachusetts, again opened her home for Lilac Week. After her death in 1960, the Woodland Federated Garden Club, shocked that the garden might be bulldozed for industry, succeeded in raising money to buy it and have it declared a state and national historic site. [9]

In 1964, her house and lilac gardens were saved from being torn down to make room for an industrial site, and are currently maintained as a state and National Historic Landmark by the Lilac Society.

The Cedar Creek Grist Mill, a National Historic Landmark, is located near Woodland.

Woodland has a mayor–council form of government. The City of Woodland was incorporated on March 26, 1906, and operates under the laws of the State of Washington applicable to optional code cities ( Title 35A RCW). Under this form of local government, the mayor has executive power, providing the day-to-day administrative functions, as well as presiding as chairperson at city council meetings. The seven-member city council sets policies and implements legislation through regularly scheduled council meetings and by serving on council committees. These policies and legislation, also known as resolutions and ordinances, ensure that the city functions efficiently and effectively. [10]

Woodland is also served by several boards and commissions that play an advisory role to the city council. Local citizens are able to play an active role in their government by serving as board or commission members. 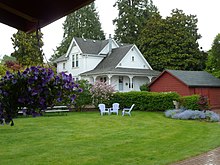 This region experiences warm (but not hot) and dry summers, with no average monthly temperatures above 71.6 °F (22.0 °C). According to the Köppen Climate Classification system, Woodland has a warm-summer Mediterranean climate, abbreviated "Csb" on climate maps. [14]

There were 1,965 households, of which 41.8% had children under the age of 18 living with them, 52.6% were married couples living together, 13.1% had a female householder with no husband present, 5.4% had a male householder with no wife present, and 28.9% were non-families. 22.3% of all households were made up of individuals, and 10% had someone living alone who was 65 years of age or older. The average household size was 2.77 and the average family size was 3.25.

Woodland Public Schools operates public schools in the city, including Woodland High School. As of 2019 [update], the district has approximately 2,487 students, served by one high school, one middle school, and three elementary schools. [17] [18]

Planter's Days, first held in 1922, is the longest continuously running civic celebration/community festival in the state of Washington. Planter's Days is a four-day festival celebrating the completed construction of the dikes along the Columbia and Lewis Rivers, preventing the annual flooding in the Woodland area. [19] [20] The major events include: Coronation of the Planter's Day Court, a parade through "Old Town" Woodland, the Firefighters' BBQ, the Frog Jump, amusement rides at Horseshoe Lake Park, and a car show on the last day of the Festival.