From Wikipedia
https://en.wikipedia.org/wiki/Wildlife_of_Madagascar
Animals of the island of Madagascar 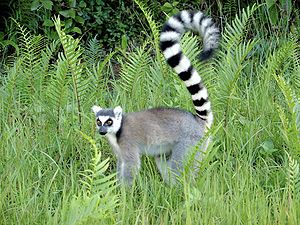 A ring-tailed lemur (Lemur catta), the most familiar of Madagascar's numerous species of lemur.

As a result of the island's long isolation from neighboring continents, Madagascar is home to an abundance of plants and animals found nowhere else on Earth. [2] [3] Approximately 90 percent of all plant and animal species found in Madagascar are endemic, [4] including the lemurs (a type of strepsirrhine primate), the carnivorous fossa and many birds. This distinctive ecology has led some ecologists to refer to Madagascar as the "eighth continent", [5] and the island has been classified by Conservation International as a biodiversity hotspot. [2] As recent as 2021, the "smallest reptile on earth" was also found in Madagascar, known as the Brookesia nana, or nano-chameleon. [6]

The silky sifaka is one of over 100 known species and subspecies of lemur found only in Madagascar. [7]

Madagascar's isolation from other land masses throughout the Cenozoic Era has led to the evolution of a large proportion of endemic animal species and the absence of many taxa found on neighboring continents. Some of Madagascar's animals appear to represent lineages that have been present since the breakup of Gondwana, while many others, including all of the nonflying native mammals, are descendants of ancestors that survived rare rafting or swimming voyages from Africa (likely aided by currents). [8] [9] As of 2012 it has over 200 extant mammal species, including over 100 species of lemurs, about 300 species of birds, more than 260 species of reptiles, and at least 266 species of amphibians. The island also has a rich invertebrate fauna including earthworms, insects, spiders and nonmarine molluscs.

Lemurs have been characterized as "Madagascar's flagship mammal species" by Conservation International. [2] In the absence of monkeys and other competitors, these primates have adapted to a wide range of habitats and diversified into numerous species. As of 2012, there were officially 103 species and subspecies of lemur, [10] 39 of which were described by zoologists between 2000 and 2008. [11] They are almost all classified as rare, vulnerable, or endangered. Since the arrival of humans on Madagascar, at least 17 species of lemur have become extinct; all of them were larger than the surviving lemur species. [12]

A number of other mammals, including the cat-like fossa, are endemic to Madagascar. Over 300 species of birds have been recorded on the island, of which over 60 percent (including four families and 42 genera) are endemic. [2] The few families and genera of reptile that have reached Madagascar have diversified into more than 260 species, with over 90 percent of these being endemic [13] (including one endemic family). [2] The island is home to two-thirds of the world's chameleon species, [13] including the smallest known, [14] and researchers have proposed that Madagascar may be the origin of all chameleons.

Endemic fish of Madagascar include two families, 15 genera and over 100 species, primarily inhabiting the island's freshwater lakes and rivers. Although invertebrates remain poorly studied on Madagascar, researchers have found high rates of endemism among the known species. All 651 species of terrestrial snail are endemic, as are a majority of the island's butterflies, scarab beetles, lacewings, spiders and dragonflies. [2] 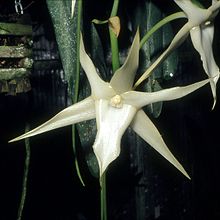 Comet orchid ( Angraecum sesquipedale), the flowers of this orchid have a very long spur and are pollinated by a species of hawkmoth with a proboscis of matching length.

More than 80 percent of Madagascar's 14,883 plant species are found nowhere else in the world, including five plant families. [15] There are several endemic families including the Asteropeiaceae, Sarcolaenaceae and Sphaerosepalaceae. The humid eastern part of the island was formerly covered in rainforest with many palms, ferns and bamboo, although much of this forest has been reduced by human activity. The west has areas of dry deciduous forest with many lianas and with tamarind and baobabs among the dominant trees. Subhumid forest once covered much of the central plateau but grassland is now the dominant vegetation type there. The family Didiereaceae, composed of four genera and 11 species, is limited to the spiny forests of southwestern Madagascar. [16]

Four-fifths of the world's Pachypodium species are endemic to the island. [17] Three-fourths [18] of Madagascar's 860 [15] orchid species are found here alone, as are six of the world's eight baobab species. [19] The island is home to around 170 palm species, three times as many as on all of mainland Africa; 165 of them are endemic. [18]

Many native plant species are used as herbal remedies for a variety of afflictions. The drugs vinblastine and vincristine, used to treat Hodgkin's disease, leukemia and other cancers, were derived from the Madagascar periwinkle. [20] The traveler's palm, known locally as ravinala [21] and endemic to the eastern rain forests, [22] is highly iconic of Madagascar and is featured in the national emblem as well as the Air Madagascar logo. [23] 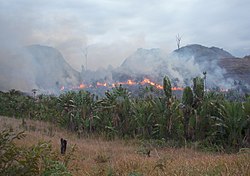 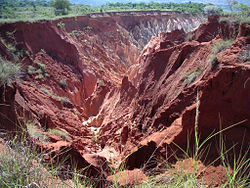 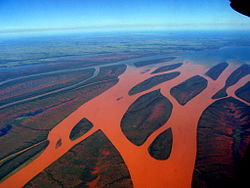 Madagascar's varied fauna and flora are endangered by human activity. [24] Since the arrival of humans around 2,350 years ago, Madagascar has lost more than 90 percent of its original forest. [25]

This forest loss is largely fueled by tavy ("fat"), a traditional slash-and-burn agricultural practice imported to Madagascar by the earliest settlers. [26] Malagasy farmers embrace and perpetuate the practice not only for its practical benefits as an agricultural technique, but for its cultural associations with prosperity, health and venerated ancestral custom (fomba malagasy). [27]

As human population density rose on the island, deforestation accelerated beginning around 1400 years ago. [28] By the 16th century, the central highlands had been largely cleared of their original forests. [26] More recent contributors to the loss of forest cover include the growth in cattle herd size since their introduction around 1000 years ago, a continued reliance on charcoal as a fuel for cooking, and the increased prominence of coffee as a cash crop over the past century. [29] According to a conservative estimate, about 40 percent of the island's original forest cover was lost from the 1950s to 2000, with a thinning of remaining forest areas by 80 percent. [30]

In addition to traditional agricultural practice, wildlife conservation is challenged by the illicit harvesting of protected forests, as well as the state-sanctioned harvesting of precious woods within national parks. Although banned by then-President Marc Ravalomanana from 2000 to 2009, the collection of small quantities of precious timber from national parks was re-authorized in January 2009 and has dramatically intensified under the administration of current head of state Andry Rajoelina as a key source of state revenues to offset cuts in donor support following Ravalomanana's ouster. [31] It is anticipated that all the island's rainforests, excluding those in protected areas and the steepest eastern mountain slopes, will have been deforested by 2025. [32]

Habitat destruction and hunting have threatened many of Madagascar's endemic species or driven them to extinction. [33] The island's elephant birds, a family of endemic giant ratites, became extinct in 17th century or earlier, most probably due to human hunting of adult birds and poaching of their large eggs for food. [34] Numerous giant lemur species vanished with the arrival of human settlers to the island, while others became extinct over the course of the centuries as a growing human population put greater pressures on lemur habitats and, among some populations, increased the rate of lemur hunting for food. [35] 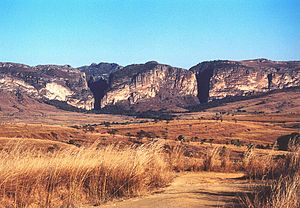 In 2003 Ravalomanana announced the Durban Vision, an initiative to more than triple the island's protected natural areas to over 60,000 km2 (23,000 sq mi) or 10 percent of Madagascar's land surface. As of 2011, areas protected by the state included five Strict Nature Reserves (Réserves Naturelles Intégrales), 21 Wildlife Reserves (Réserves Spéciales) and 21 National Parks (Parcs Nationaux). [36] In 2007 six of the national parks were declared a joint World Heritage Site under the name Rainforests of the Atsinanana. These parks are Marojejy, Masoala, Ranomafana, Zahamena, Andohahela and Andringitra. [37]

Local timber merchants are harvesting scarce species of rosewood trees from protected rainforests within Marojejy National Park and exporting the wood to China for the production of luxury furniture and musical instruments. [38] To raise public awareness of Madagascar's environmental challenges, the Wildlife Conservation Society opened an exhibit entitled "Madagascar!" in June 2008 at the Bronx Zoo in New York. [39]

There are many conservation networks dedicated to conserving wildlife in Madagascar. The Lemur Conservation Network works with over 100 organizations to mobilize funds and disperse them in order to promote conservation and research on lemurs. They also have a funding guide available to guide conservation donations, and promote a blog to engage the public and spread awareness. [40] They are headed by Lucía Rodríguez Valverde and Seheno Corduant-Andriantsaralaza. [41]

Across the island, Madagaskara Voakajy aims to conserve many endangered species that are often used as meat by the inhabitants of Madagascar. This organization, directed by Julie Hanta Razafimanahaka, focuses on community education in order to allow local people to understand the threats of bushmeat consumption, not only from a conservation standpoint but from a human health perspective as well. They also train young Malagasy people to become future biologists and conversationalists. [42]

Current research in and on Madagascar and the Western Indian Ocean islands is published in the Madagascan open access journal Madagascar Conservation & Development, an initiative by the Missouri Botanical Garden, the Madagascar Research and Conservation Program and the Institute and Museum of Anthropology at the University of Zurich. [43] The Lemur Conservation Network also provides funding for many lemur research programs. [40] Madagasikara Voakajy participates in research and publication in order to bring conservation into the research world. [43]