Wikimedia Cloud Services (WMCS) (formerly known as WMFLabs or Labs) is a flexible computing ecosystem built on OpenStack, GridEngine, and Kubernetes. The project empowers technical contribution to the Wikimedia software world. The products and resources of the WMCS project are available for use by anyone connected with the Wikimedia movement. Support and administration of the WMCS resources is provided by a Wikimedia Foundation team and Wikimedia movement volunteers. The WMCS project is managed from the Wikitech wiki which also hosts technical docs about the Foundation's main servers (aka the production environment). 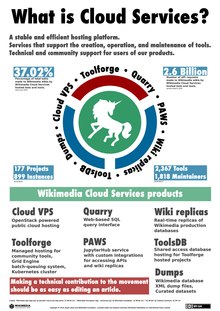 The project uses OpenStack to provide developers with instances to help them debug and test software updates and changes. Each instance is a virtual environment that can be shared with others. This allows developers to test configurations before they are deployed to the production environment.

Anybody is allowed to create a Wikitech account which can be used to request access to Toolforge or Cloud VPS, but all software must be released under a free license per wikitech:Wikitech:Cloud Services Terms of use. Related help can be found at wikitech:Help:Contents.

Software tools including scripts and bots related to maintaining WMF projects can be hosted on the Wikimedia Toolforge servers. Additional help for developers may be found at wikitech:Help:Toolforge. A complete listing of tools can be found at Toolforge:admin/tools, and a more detailed but incomplete list at toolforge:hay/directory.

Data Services is a collection of products, including private-information-redacted copies of Wikimedia's production wiki databases, and access to Wikimedia Dumps.

The operational status of Wikimedia Cloud VPS can be found at the following;

Wikimedia Cloud Services was designed to give volunteer software developers a place to write and test software for WMF operations, with the goal of increasing volunteers' ability to help maintain WMF's infrastructure. It was opened for beta testing to a limited number of users in October 2011. After several months of testing, the service was opened to the general public in April 2012.

Wikimedia Cloud Services included two main branches, initially named Wikimedia Labs and Tool Labs. The latter was meant to provide a replacement for the Wikimedia Toolserver, which had been hosted by Wikimedia Deutschland.

In February 2013, the Wikimedia Foundation contracted Marc-André Pelletier to provide assistance to tool/bot authors in migrating their tools and bots to the Wikimedia Labs' servers. A help page for migrating has been set up at wikitech:User:Magnus Manske/Migrating from toolserver with helpful advice. General information may be found at mw:Wikimedia Labs/Tool Labs/Migration of Toolserver tools.