West Lancashire is a local government district with borough status in Lancashire, England. The council is based in Ormskirk, and the largest town in the borough is Skelmersdale. At the 2011 Census, the population of the borough was 110,685. [3]

The district was created on 1 April 1974 under the Local Government Act 1972, as a non-metropolitan district, with Lancashire County Council as the higher tier authority providing county-level services. West Lancashire covered the whole territory of two former districts and parts of another two districts, all of which were abolished at the same time: [4]

Proposals to divide Lancashire into three unitary authorities were put forward in 2020, which would have seen both Lancashire County Council and West Lancashire Borough Council abolished. [7] The Government did not pursue that proposed reform, although left open the possibility of other forms of reorganisation in future. [8]

The council employs around 600 people, making it one of West Lancashire's largest employers. It is responsible for the administration of various services, such as leisure, waste collection, planning permission and pest control. [1]

The council is based at 52 Derby Street in Ormskirk, which was originally a pair of large semi-detached Victorian houses called Beaconsfield (number 52) and Abbotsford (number 54). [9] Beaconsfield was purchased in 1925 by West Lancashire Rural District Council, one of the modern council's predecessors, and converted to become its headquarters, being formally opened on 30 July 1925. [10] Abbotsford was acquired later and the building has been significantly extended to the rear. [11]

Skelmersdale, a former New Town, and Ormskirk are the two main towns in the borough. These are surrounded by a patchwork of smaller settlements to the west and north.

There are 22 civil parishes in West Lancashire, although the main towns of Skelmersdale and Ormskirk are unparished areas. There is a movement to establish a town council in Skelmersdale. [13] 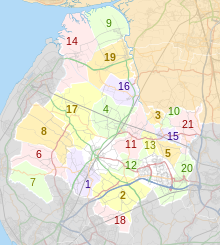 All the civil parishes have a parish council, with the exception of Bispham, which has a parish meeting instead.

West Lancashire is twinned with: [14]