The wedding of Victoria, Crown Princess of Sweden, and Daniel Westling took place on 19 June 2010 in Stockholm Cathedral. [1] It has been described as "Europe's biggest royal wedding since the Prince of Wales married Lady Diana Spencer in 1981." [2] Westling thereby acquired Victoria's ducal title, becoming a Swedish prince and Duke of Västergötland. [3] In time for the wedding, a joint monogram of their initials was created. [4]

Victoria is the eldest child of King Carl XVI Gustaf and Queen Silvia. As the firstborn of the family, she was designated heir apparent in 1979, ( SFS 1979:932) ahead of her younger brother. Westling was Victoria's personal trainer at Master Training. In July 2002, Victoria and Westling were pictured kissing for the first time [5] at a birthday party for Caroline Kreuger, a close friend of Victoria's. Westling and Victoria's engagement was announced on 24 February 2009. The wedding was set to take place in Stockholm Cathedral on 19 June 2010, the 34th anniversary of her parents' marriage [3] and a traditional wedding date of the Swedish Royal Family (several past House of Bernadotte family members had married on that date). [6] The chosen year 2010 also marks the 200th year since Jean Baptiste Jules Bernadotte, from whom the Royal House of Sweden descends, became heir presumptive to the Swedish throne. [7]

On 17 September 2009, the cathedral parish of Stockholm announced that there would be a restoration of Stockholm Cathedral during the period January–April 2010, and costing 12.4 million Swedish kronor. [8] The wedding itself cost about 20 million kronor which was paid half by the Swedish Royal Family and half by the Swedish government from tax money. [9] This was criticized by some Swedish citizens [10] but the argument was debunked by official response saying that the wedding will generate equivalent or more revenue from the event. [11] This argument was mostly seen as an excuse to continue the monarchy system, rather than evaluating their present-day relevance. [12]

On 24 November 2009 it was decided that the days between the Swedish national day on 6 June and the wedding date on 19 June would be Love Stockholm 2010 days. [13] With festivities for residents and visitors such as music, art, culture, food, design, and history, the city of Stockholm had hoped for sponsor deals to pay for the arrangements. [14]

On 18 June, the Parliament of Sweden honoured the couple with a gala performance at Stockholm Concert Hall. Performers at the gala included the Royal Stockholm Philharmonic Orchestra, Malena Ernman, Helen Sjöholm, and Peter Jöback. The famous Swedish band Roxette was reunited on stage, and they performed their hit song " The Look". [15]

Insignia at the wedding

On the morning of the wedding, the Crown of Sweden's Heir Apparent and Prince Wilhelm's Crown were removed from their showcases in the Treasury at the Royal Palace of Stockholm. [16] They were placed on each side of the altar in the cathedral. The crowns are part of a tradition, a crown is used in association with the person the occasion is about. Princess Sofia Albertina's crown is also associated with Victoria as it was used at her christening. [17] Princess Sofia Albertina's crown was later used at the wedding of Prince Carl Phillip.

The couple at the altar

The wedding service began at 15:30 local time in Stockholm Cathedral, with around 1,100 guests present. [10] The music in the ceremony was headed by Gustaf Sjökvist, court organist and organist for the Cathedral Parish of Stockholm. He was also in charge of the music during the wedding of Victoria's parents in 1976. [18]

The service was conducted by Anders Wejryd, Archbishop of Uppsala. He was assisted by Lars-Göran Lönnermark, Royal Court Chief Chaplain, and Dr Antje Jackelén, Bishop of Lund. The Great Marriage Litany was sung by Åke Bonnier, Dean of the Cathedral and Royal Court Chaplain. [19]

Victoria's white satin dress was by Swedish designer Pär Engsheden and had a five meter long train. [20] She wore Empress Josephine's cameo diadem [21] which her mother, Queen Silvia, and two of her paternal aunts wore when they married.

The first piece of music that was played was written by Karin Rehnqvist especially for the couple as a gift from the Royal Swedish Academy of Music.

Victoria walked down the aisle with her father, who then handed her over to Daniel. The wedding couple then stood in front of the archbishop, who told them about the importance of supporting each other in a marriage. After Victoria and Daniel were pronounced husband and wife, Swedish singers Agnes Carlsson and Björn Skifs finished the ceremony with the song " When You Tell The World You're Mine", written for the couple. [22] Victoria and Daniel walked under crossed swords after stepping out of the cathedral. [23]

Debate about handing over the bride

The couple wanted the king to lead the crown princess to the altar and there hand her over to the groom. This created a public debate in Sweden, as that would have been contrary to the established customs of the Church of Sweden, where bride and groom walk up to the altar together. Critics among the clergy held that the symbolism in handing over the bride from father to groom reflects reactionary societal norms, as if an unmarried woman is the property of her father and is about to turn into the proprietary ownership of the groom. [24] [25] The Royal Court defended the handing over with the statement that, "the king conveys the heir to the throne and hands her over to a man who has been accepted". [24] In the end a compromise was reached, with the king handing over the crown princess to her groom before they reached the altar. 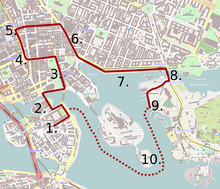 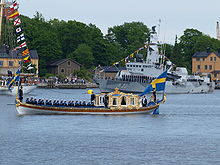 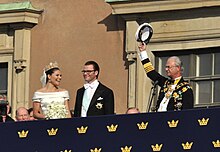 A carriage procession followed the ceremony, in which the wedding couple was transported through the streets of Stockholm. On their way they passed by twenty musical bands, nineteen of which were military. Victoria and Daniel then proceeded in the royal barge Vasaorden over Stockholm's waters; the same barge that was used by Victoria's parents, King Carl XVI Gustaf and Queen Silvia, during their wedding in 1976. [26] 500,000 people are estimated to have gathered to watch the procession, [10] which was nearly seven kilometers long. [26] 18 fighter jets flew across the sky as the barge approached its landing place at the royal palace, where the wedding banquet was later held. [23]

The wedding of Victoria and Daniel was the biggest event that has ever been covered on television in Stockholm, according to Sveriges Television. [18]

The Royal Academies and others

The Bride and Groom's personal friends

The wedding banquet was held on the night of the wedding day in the Hall of State at the Royal Palace of Stockholm, Sweden's finest ceremonial hall. The Hall of State was renovated for the occasion. 98 guests of the nearly 600 invited guests were accommodated in the main table. Pink and white flowers were strewn over the table decorations, which included silver candelabra and silver bowls. [32] On the seats of honour were sitting the wedding couple; their parents King Carl Gustaf and Queen Silvia and Mr and Mrs Westling; Victoria's godparents Ralf de Toledo Sommerlath, Princess Désirée, Baroness Silfverschiöld, the Queen of the Netherlands and the King of Norway as well as Count Carl Johan Bernadotte of Wisborg, the King's uncle; Princess Margaretha, Mrs. Ambler, the King's eldest sister; the Queen of Denmark, the King of the Belgians; Tarja Halonen, the President of Finland; and Anders Wejryd, the Archbishop of Uppsala. 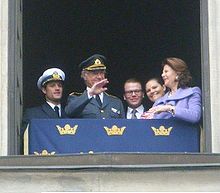 Sweden has only practiced absolute cognatic primogeniture since 1980 ( SFS 1979:932). [33] This means that Victoria is the first female heir apparent to marry. [34] Westling became the first man of the people to obtain a new title or rank as the spouse of a Swedish princess since the Middle Ages. [35] All previous princes have been born to royal parents of Swedish origin or have been foreign dukes that have married Swedish princesses. [36] As a result, questions arose as to how Westling would be known after the wedding.

The Swedish Royal Court first announced on 20 February 2010 that upon his marriage to Crown Princess Victoria, who is Duchess of Västergötland, Westling would receive the titles of "Prince Daniel" and "Duke of Västergötland". [3] It was further announced in May 2010, by the Swedish Royal Court, that Westling will be granted the style His Royal Highness upon his marriage to Crown Princess Victoria. He will thus be known as Prince Daniel, Duke of Västergötland. [37] [38] The last part of his title corresponds in form to the style used by other Swedish princes, including Victoria's younger brother Prince Carl Philip, Duke of Värmland, i.e. Prince + Given name + Duke of Swedish Province. The novelty here is that Westling would be using his wife's ducal title, something new for men in Sweden. [39]

Sweden discontinued in the 17th century the grant of provinces as territorial appanages to royal princes which, as dukes thereof, they had governed semi-autonomously. Since then, these provincial dukedoms exist in the royal family only nominally, but each prince or princess traditionally maintains a special public connection to one. [36] The sons of Swedish kings have held the princely title as a rank of nobility (e.g. Fredrik Vilhelm, Prince (Furste) av Hessenstein), as a courtesy title for an ex-dynast (e.g. Prince (Prins) Oscar Bernadotte) and, most often, as a royal dynast (e.g. Prince Bertil of Sweden, Duke of Halland).

Media related to Wedding of Victoria, Crown Princess of Sweden, and Daniel Westling at Wikimedia Commons