Web colors are colors used in displaying web pages on the World Wide Web, and the methods for describing and specifying those colors. Colors may be specified as an RGB triplet or in hexadecimal format (a hex triplet) or according to their common English names in some cases. A color tool or other graphics software is often used to generate color values. In some uses, hexadecimal color codes are specified with notation using a leading number sign (#). [1] [2] A color is specified according to the intensity of its red, green and blue components, each represented by eight bits. Thus, there are 24 bits used to specify a web color within the sRGB gamut, and 16,777,216 colors that may be so specified.

Colors outside the sRGB gamut can be specified in Cascading Style Sheets by making one or more of the red, green and blue components negative or greater than 100%, so the color space is theoretically an unbounded extrapolation of sRGB similar to scRGB. [3] Specifying a non-sRGB color this way requires the RGB() function call. It is impossible with the hexadecimal syntax (and thus impossible in legacy HTML documents that do not use CSS).

The first versions of Mosaic and Netscape Navigator used the X11 color names as the basis for their color lists, as both started as X Window System applications. Web colors have an unambiguous colorimetric definition, sRGB, which relates the chromaticities of a particular phosphor set, a given transfer curve, adaptive whitepoint, and viewing conditions. [4] These have been chosen to be similar to many real-world monitors and viewing conditions, to allow rendering to be fairly close to the specified values even without color management. User agents vary in the fidelity with which they represent the specified colors. More advanced user agents use color management to provide better color fidelity; this is particularly important for Web-to-print applications.

For example, consider the color where the red/green/blue values are decimal numbers: red=36, green=104, blue=160 (a grayish-blue color). The decimal numbers 36, 104, and 160 are equivalent to the hexadecimal numbers 24, 68, and A0 respectively. The hex triplet is obtained by concatenating the six hexadecimal digits together, 2468A0 in this example.

If any one of the three color values is less than 10 hex (16 decimal), it must be represented with a leading zero so that the triplet always has exactly six digits. For example, the decimal triplet 4, 8, 16 would be represented by the hex digits 04, 08, 10, forming the hex triplet 040810.

An abbreviated, three (hexadecimal)-digit form is used. [5] Expanding this form to the six-digit form is as simple as repeating each digit: 09C becomes 0099CC as presented on the following CSS example:

This shorthand form reduces the palette to 4,096 colors, equivalent of 12-bit color as opposed to 24-bit color using the whole six-digit form (16,777,216 colors). This limitation is sufficient for many text-based documents.

RGB values are usually given in the 0–255 range; if they are in the 0–1 range, the values are multiplied by 255 before conversion. This number divided by sixteen (integer division; ignoring any remainder) gives the first hexadecimal digit (between 0 and F, where the letters A to F represent the numbers 10 to 15. See hexadecimal for more details). The remainder gives the second hexadecimal digit. For instance, the RGB value 201 divides into 12 groups of 16, thus the first digit is C. A remainder of nine gives the hexadecimal number C9. This process is repeated for each of the three color values.

Conversion between number bases is a common feature of calculators, including both hand-held models and the software calculators bundled with most modern operating systems. Web-based tools specifically for converting color values are also available.

The basic colors are 16 colors defined in the HTML 4.01 specification, ratified in 1999, [8] as follows (names are defined in this context to be case-insensitive):

These 16 were labelled as sRGB and included in the HTML 3.0 specification, which noted they were "the standard 16 colors supported with the Windows VGA palette." [9] 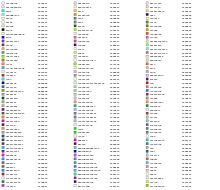 Several colors are defined by web browsers. A particular browser may not recognize all of these colors, but as of 2005, all modern, general-use, graphical browsers support the full list of colors. Many of these colors are from the list of X11 color names distributed with the X Window System. These colors were standardized by SVG 1.0, and are accepted by SVG Full user agents. They are not part of SVG Tiny.

The list of colors shipped with the X11 product varies between implementations and clashes with certain of the HTML names such as green. X11 colors are defined as simple RGB (hence, no particular color space), rather than sRGB. This means that the list of colors found in X11 (e.g., in /usr/lib/X11/rgb.txt) should not directly be used to choose colors for the web. [10]

The Cascading Style Sheets specification defines the same number of named colors as the HTML 4 spec, namely the 16 html colors, and 124 colors from the Netscape X11 color list for a total of 140 names that were recognized by Internet Explorer (IE) 3.0 and Netscape Navigator 3.0. [13] Blooberry.com notes that Opera 2.1 and Safari 1 also included Netscape's expanded list of 140 color names, but later discovered 14 names not included with Opera 3.5 on Windows 98. [14]

CSS also supports the special color transparent, which represents an alpha value of zero; by default, transparent is rendered as an invisible nominal black: rgba(0, 0, 0, 0). It was introduced in CSS1 but its scope of use has expanded over the versions. [23]

Besides new ways to write colors, it also introduces the concept of mixing colors in a non-sRGB color space, a first step towards fixing a well-known issue in color gradients. Some sections explaining color theory and common operations like gamut mapping are also added to aid implementation. [24]

CSS Color 4 introduces several different formats for device independent color that can display the entirety of visible color (in a capable screen), including: [25]

A number of RGB spaces with gamuts that are wider than sRGB are also introduced through the new color() function: [25]

A linearized variant of sRGB is also defined for color mixing. [24]

On 21 June 2014, the CSS WG added the color RebeccaPurple to the Editor's Draft of the Colors module level 4, to commemorate Eric Meyer's daughter Rebecca, who died on 7 June 2014, her sixth birthday. [26]

CSS4 also introduces the HWB color model as an alternative to HSL/HSV. [18]

Custom color spaces are also supported via ICC profiles. This allows the use of CMYK on web pages. [27]

In the mid-1990s, many displays were only capable of displaying 256 colors. [28] These may be dictated by the hardware or changeable by a "color table". When a color is found (e.g., in an image) that is not available, a different one had to be used. This can be done by either using the closest color or by using dithering.

There were various attempts to make a "standard" color palette. A set of colors was needed that could be shown without dithering on 256-color displays; the number 216 was chosen partly because computer operating systems customarily reserved sixteen to twenty colors for their own use; it was also selected because it allows exactly six equally spaced shades of red, green, and blue (6 × 6 × 6 = 216), each from 00 to FF (including both limits).

The list of colors is presented as if it had special properties that render them immune to dithering, but on 256-color displays applications can actually set a palette of any selection of colors that they choose, dithering the rest. These colors were chosen specifically because they matched the palettes selected by various browser applications. There were not very different palettes in use in different browsers.[ citation needed]

"Web-safe" colors had a flaw in that, on systems such as X11 where the palette is shared between applications, smaller color cubes (5×5×5 or 4×4×4) were allocated by browsers—the "web-safe" colors would dither on such systems. Different results were obtained by providing an image with a larger range of colors and allowing the browser to quantize the color space if needed, rather than suffer the quality loss of a double quantization.

Through the 2000s, use of 256-color displays in personal computers dropped sharply in favour of 24-bit ( TrueColor) displays, [29] and the use of "web-safe" colors has fallen into practical disuse.

The "web-safe" colors do not all have standard names, but each can be specified by an RGB triplet: each component (red, green, and blue) takes one of the six values from the following table (out of the 256 possible values available for each component in full 24-bit color).

The following table shows all of the "web-safe" colors. One shortcoming of the web-safe palette is its small range of light colors for webpage backgrounds, whereas the intensities at the low end of the range, such as the two darkest, are similar to each other, making them hard to distinguish. Values flanked by "*" (asterisk) are part of the "really safe palette;" see Safest web colors, below.

Designers were encouraged to stick to these 216 "web-safe" colors in their websites because there were a lot of 8-bit color displays when the 216-color palette was developed. David Lehn and Hadley Stern discovered that only 22 of the 216 colors in the web-safe palette are reliably displayed without inconsistent remapping on 16-bit computer displays. They called these 22 colors "the really safe palette"; it consists largely of shades of green, yellow, and blue. [30] [31]

Some browsers and devices do not support colors. For these displays or blind and colorblind users, Web content depending on colors can be unusable or difficult to use.

The Web Content Accessibility Guidelines recommend a contrast ratio of at least 4.5:1 between the relative luminance of text and its background color [33] or at least 3:1 for large text. Enhanced accessibility requires contrast ratios greater than 7:1.