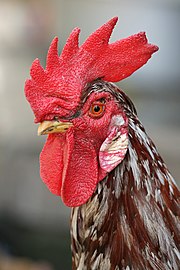 A rooster's wattles hang from the throat

A wattle is a fleshy caruncle hanging from various parts of the head or neck in several groups of birds and mammals. Caruncles in birds include those found on the face, wattles, dewlaps, snoods, and earlobes. Wattles are generally paired structures, but may occur as a single structure when it is sometimes known as a dewlap. Wattles are frequently organs of sexual dimorphism. In some birds, caruncles are erectile tissue and may or may not have a feather covering. [1] [2]

Wattles are often such a striking morphological characteristic of animals that it features in their common name. For example, the southern and northern cassowaries are known as the double-wattled and single-wattled cassowary, respectively, and a breed of domestic pig is known as the Red Wattle.

In birds, wattles are often an ornament for courting potential mates. Large wattles are correlated with high testosterone levels, good nutrition, and the ability to evade predators, which in turn indicates a potentially successful mate. Ornamental organs such as wattles may be associated with genes coding for disease resistance. [3] In umbrellabirds, the wattle serves to amplify the birds' calls. [4]

Birds with wattles include:

Mammals with wattles include:

Look up wattle in Wiktionary, the free dictionary.