From Wikipedia
https://en.wikipedia.org/wiki/Wadi
River valley, especially a dry riverbed that contains water only during times of heavy rain
For other uses, see Wadi (disambiguation). 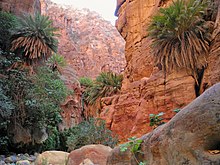 Wadi ( Arabic: وَادِي, romanized: wādī), alternatively wād ( Arabic: وَاد), North African Arabic Oued, is the Arabic term traditionally referring to a valley. In some instances, it may refer to a wet ( ephemeral) riverbed that contains water only when heavy rain occurs. [1]

Wadis are located on gently sloping, nearly flat parts of deserts; commonly they begin on the distal portions of alluvial fans and extend to inland sabkhas or dry lakes. In basin and range topography, wadis trend along basin axes at the terminus of fans. Permanent channels do not exist, due to lack of continual water flow. They have braided stream patterns because of the deficiency of water and the abundance of sediments. Water percolates down into the stream bed, causing an abrupt loss of energy and resulting in vast deposition. Wadis may develop dams of sediment that change the stream patterns in the next flash flood.

Wadi sediments may contain a range of material, from gravel to mud, and the sedimentary structures vary widely. Thus, wadi sediments are the most diverse of all desert environments.

Modern English usage differentiates wadis from canyons or washes by the action and prevalence of water. Wadis, as drainage courses, are formed by water, but are distinguished from river valleys or gullies in that surface water is intermittent or ephemeral. Wadis are generally dry year round, except after a rain. The desert environment is characterized by sudden but infrequent heavy rainfall, often resulting in flash floods. Crossing wadis at certain times of the year can be dangerous as a result.

Wadis tend to be associated with centers of human population because sub-surface water is sometimes available in them. Nomadic and pastoral desert peoples will rely on seasonal vegetation found in wadis, even in regions as dry as the Sahara, as they travel in complex transhumance routes.

The centrality of wadis to water – and human life – in desert environments gave birth to the distinct sub-field of wadi hydrology in the 1990s. [3]

Deposition in a wadi is rapid because of the sudden loss of stream velocity and seepage of water into the porous sediment. Wadi deposits are thus usually mixed gravels and sands. These sediments are often altered by eolian processes. [4]