From Wikipedia
https://en.wikipedia.org/wiki/Wader
Birds of the order Charadriiformes
This article is about a group of charadriiform birds. For the waterproof hip boots or fishing trousers, see Waders (footwear). For the group that refers to storks, ibises and herons by North American birders, see Wader (American).
"Shorebirds" redirects here. For the punk rock music band, see Shorebirds (band). 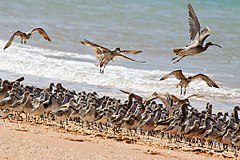 Waders roosting on the beach at high tide 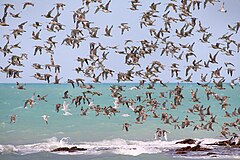 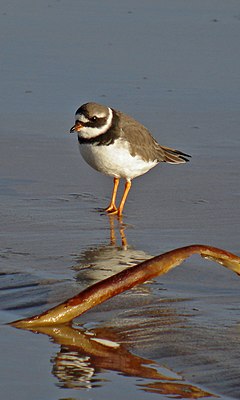 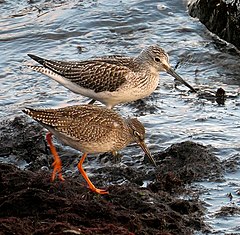 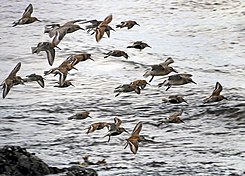 A flock of Dunlins and Red knots

Waders or shorebirds are birds of the order Charadriiformes commonly found wading along shorelines and mudflats in order to forage for food crawling or burrowing in the mud and sand, usually small arthropods such as aquatic insects or crustaceans. The term "wader" is used in Europe, while "shorebird" is used in North America, where "wader" may be used instead to refer to long-legged wading birds such as storks and herons.

There are about 210 [1] species of wader, most of which live in wetland or coastal environments. Many species of Arctic and temperate regions are strongly migratory, but tropical birds are often resident, or move only in response to rainfall patterns. Some of the Arctic species, such as the little stint, are amongst the longest distance migrants, spending the non- breeding season in the southern hemisphere.

Many of the smaller species found in coastal habitats, particularly but not exclusively the calidrids, are often named as "sandpipers", but this term does not have a strict meaning, since the upland sandpiper is a grassland species.

The smallest member of this group is the least sandpiper, small adults of which can weigh as little as 15.5 grams (0.55 oz) and measure just over 13 centimetres (5 inches). The largest species is believed to be the Far Eastern curlew, at about 63 cm (25 in) and 860 grams (1 pound 14 ounces), although the beach thick-knee is the heaviest at about 1 kg (2 lb 3 oz).

In the Sibley-Ahlquist taxonomy, waders and many other groups are subsumed into a greatly enlarged order Ciconiiformes. However, the classification of the Charadriiformes is one of the weakest points of the Sibley-Ahlquist taxonomy, as DNA–DNA hybridization has turned out to be incapable of properly resolving the interrelationships of the group. Formerly, the waders were united in a single suborder Charadrii, but this has turned out to be a " wastebasket taxon", uniting no fewer than four charadriiform lineages in a paraphyletic assemblage. However, it indicated that the plains wanderer actually belonged into one of them. Following recent studies (Ericson et al., 2003; Paton et al., 2003; Thomas et al., 2004a, b; van Tuinen et al., 2004; Paton & Baker, 2006), the waders may be more accurately subdivided.

The waders are a group of two Charadriiformes suborders which include 13 families. Species in the third Charadriiforme suborder, Lari, are not considered as waders. [2]

Shorebirds is a blanket term used to refer to multiple bird species that live in wet, coastal environments. Because most these species spend much of their time near bodies of water, many have long legs suitable for wading (hence the name ‘Waders’). Some species prefer locations with rocks or mud. Many shorebirds display migratory patterns and often migrate before breeding season. These behaviors explain the long wing lengths observed in species, and can also account for the efficient metabolisms that give the birds energy during long migrations. [3]

The majority of species eat small invertebrates picked out of mud or exposed soil. Different lengths of bills enable different species to feed in the same habitat, particularly on the coast, without direct competition for food. Many waders have sensitive nerve endings at the end of their bills which enable them to detect prey items hidden in mud or soft soil. Some larger species, particularly those adapted to drier habitats will take larger prey including insects and small reptiles.

Shorebirds, like many other animals, exhibit phenotypic differences between males and females, also known as sexual dimorphism. In shorebirds, various sexual dimorphisms are seen, including, but not limited to, size (e.g. body size, bill size), color, and agility. In polygynous species, where one male individual mates with multiple female partners over his lifetime, dimorphisms tend to be more diverse. [3] In monogamous species, where male individuals mate with a single female partner, males typically do not have distinctive dimorphic characteristics such as colored feathers, but they still tend to be larger in size compared to females. The suborder Charadrii displays the widest range of sexual dimorphisms seen in the order Charadriiformes. [4] However, cases of sexual monomorphism, where there are no distinguishing physical features besides external genitalia, are also seen in this order. [5]

One of the biggest factors that leads to the development of sexual dimorphism in shorebirds is sexual selection. [6] Males with ideal characteristics favored by females are more likely to reproduce and pass on their genetic information to their offspring better than the males who lack such characteristics. Mentioned earlier, male shorebirds are typically larger in size compared to their female counterparts. Competition between males tends to lead to sexual selection toward larger males and as a result, an increase in dimorphism. Bigger males tend to have greater access (and appeal) to female mates because their larger size aids them in defeating other competitors. [6] Likewise, if the species exhibits gender role reversal (where males take on roles traditionally done by females such as childcare and feeding), then males will select female mates based on traits that are the most appealing. In the Jacana species, females compete with each other for access to male mates, so females are larger in size. Males choose female mates based on who presents herself as the strongest and who 'owns' the most territory. [5]

Another factor that leads to the development of dimorphisms in species is natural selection. Natural selection focuses on traits and the environment's response to the traits in question; if the said trait increases the overall fitness of the individual possessing it, then it will be 'selected' and eventually become a permanent part of the population's gene pool. For example, depending on the food available in a shorebird specie's respective niche, bigger bill sizes may be favored in all individuals. [6] This would essentially lead to monomorphism within the species but is subject to change once sexual selection acts on the trait. Sexual selection could give rise to males with relatively larger bills than females if males used their bills to compete with other males. If larger bill size assisted the male in gathering resources, it would also make him more attractive to female mates. [3]