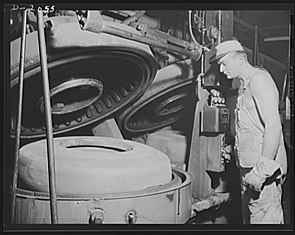 Worker placing a tire in a mold before vulcanization.

Vulcanization (British: Vulcanisation) is a range of processes for hardening rubbers. [1] The term originally referred exclusively to the treatment of natural rubber with sulfur, which remains the most common practice. It has also grown to include the hardening of other (synthetic) rubbers via various means. Examples include silicone rubber via room temperature vulcanizing and chloroprene rubber (neoprene) using metal oxides.

Vulcanization can be defined as the curing of elastomers, with the terms 'vulcanization' and 'curing' sometimes used interchangeably in this context. It works by forming cross-links between sections of polymer chain which results in increased rigidity and durability, as well as other changes in the mechanical and electrical properties of the material. [2] Vulcanization, in common with the curing of other thermosetting polymers, is generally irreversible.

The word vulcanization is derived from Vulcan, the Roman god of fire and forge.

Rubber—latex—had been known for thousands of years in Mesoamerican cultures, used to make balls, sandal soles, rubber bands, and waterproof containers. Rubber was processed for specific applications within the Aztec Empire — rubber and latex goods were processed and constructed, and then shipped to the capital for use or further distribution. [3]

Early rubber tube tires in the 19th century would grow sticky on a hot road, until debris would get stuck in them and eventually the tires would burst.

Charles Goodyear, in the 1830s, was working to improve those tube tires. He tried heating up rubber in order to mix other chemicals with it. This seemed to harden and improve the rubber, though this was due to the heating itself and not the chemicals used. Not realizing this, he repeatedly ran into setbacks when his announced hardening formulas did not work consistently. One day in 1839, when trying to mix rubber with sulfur, Goodyear accidentally dropped the mixture in a hot frying pan. To his astonishment, instead of melting further or vaporizing, the rubber remained firm and, as he increased the heat, the rubber became harder. Goodyear quickly worked out a consistent system for this hardening, which he called vulcanization because of the heat involved. He obtained a patent in the same year, and by 1844 was producing the rubber on an industrial scale.

There are many uses for vulcanized materials, some examples of which are rubber hoses, shoe soles, toys, erasers, shock absorbers, conveyor belts, [4] vibration mounts/dampers, insulation materials, tires, and bowling balls. [5] Most rubber products are vulcanized as this massively improves their lifespan, function, and strength.

In contrast with thermoplastic processes (the melt-freeze process that characterize the behaviour of most modern polymers), vulcanization, in common with the curing of other thermosetting polymers, is generally irreversible. Five types of curing systems are in common use:

The most common vulcanizing methods depend on sulfur. Sulfur, by itself, is a slow vulcanizing agent and does not vulcanize synthetic polyolefins. Accelerated vulcanization is carried out using various compounds that modify the kinetics of crosslinking; [6] this mixture is often referred to as a cure package. The main polymers subjected to sulfur vulcanization are polyisoprene ( natural rubber) and styrene-butadiene rubber (SBR), which are used for most street-vehicle tires. The cure package is adjusted specifically for the substrate and the application. The reactive sites—cure sites—are allylic hydrogen atoms. These C-H bonds are adjacent to carbon-carbon double bonds (>C=C<). During vulcanization, some of these C-H bonds are replaced by chains of sulfur atoms that link with a cure site of another polymer chain. These bridges contain between one and several atoms. The number of sulfur atoms in the crosslink strongly influences the physical properties of the final rubber article. Short crosslinks give the rubber better heat resistance. Crosslinks with higher number of sulfur atoms give the rubber good dynamic properties but less heat resistance. Dynamic properties are important for flexing movements of the rubber article, e.g., the movement of a side-wall of a running tire. Without good flexing properties these movements rapidly form cracks, and ultimately will make the rubber article fail.

The vulcanization of neoprene or polychloroprene rubber (CR rubber) is carried out using metal oxides (specifically MgO and ZnO, sometimes Pb3O4) rather than sulfur compounds which are presently used with many natural and synthetic rubbers. In addition, because of various processing factors (principally scorch, this being the premature cross-linking of rubbers due to the influence of heat), the choice of accelerator is governed by different rules to other diene rubbers. Most conventionally used accelerators are problematic when CR rubbers are cured and the most important accelerant has been found to be ethylene thiourea (ETU), which, although being an excellent and proven accelerator for polychloroprene, has been classified as reprotoxic. The European rubber industry has started a research project SafeRubber [7] to develop a safer alternative to the use of ETU.