Visual impairment in art is a limited topic covered by research, with its focus being on how visually impaired people are represented in artwork throughout history. This is commonly portrayed through the inclusion of objects such as canes and dogs to symbolize blindness, [1] which is the most frequently depicted visual impairment in art. Many notable figures in art history, such as Leonardo da Vinci, Claude Monet, and Georgia O'Keeffe, were visually impaired, or theorized to be so.

The Moche culture of ancient Peru depicted the blind in their ceramics. [2]

In 1768, James Bruce discovered the tomb of Ramesses III, whereon its walls depicted images of blind harpists. [3] Their visual impairment was represented by having slits for eyes. 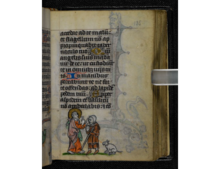 Healing a blind man in the Maastricht Hours.

Representation of blind people in Medieval art often is portrayed with leashed dogs. Some examples include:

Parable of the Blind by Pieter Bruegel the Elder.

Representation of blind people in Renaissance art, similar to Medieval art, was conveyed through symbolic objects. Some examples include:

Blindness was portrayed in more literal terms as well, via closed eyes or in text. Some examples include: 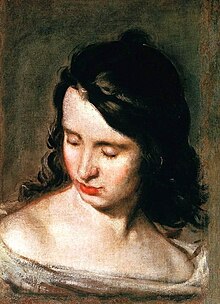 In Modern art many different mediums have been used to portray visual impairments. 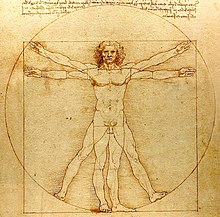 Leonardo da Vinci was an Italian polymath widely known for his diverse talents including his paintings and drawings. [11] After examining six of Da Vinci's works across three different techniques, researchers noted that the eye of the subject in each of his works turned outward. [12] One of these works included the famous depiction of the Vitruvian Man. The eyes were at an angle consistent with intermittent exotropia (deviated outward) which can alter the perception of people and objects to appear 2D. [12] The researchers theorize this may have contributed to Da Vinci's ability to capture space on a flat canvas. [12]

Guercino was an Italian Baroque painter who developed esotropia (a condition in which the eye turns inward). This affected his work causing his subjects to appear as having unusual facial features. [13]

Francis Bacon was an English Philosopher who dabbled in creating illustrations for his works. His illustrations often depict heavily distorted images that feature abnormalities in faces. This has been theorized to run consistent with dysmorphopsia, a brain condition that affects perception of objects. [14]

Rembrandt was a Dutch painter whose self portraits display an outward turned eye which would have caused a lack of depth perception called stereo blindness. [15] This meant that details were varied in his paintings.

Pablo Picasso was a Spanish printmaker and co-founder of the Cubist Movement. It is believed that he may have experienced strabismus, which is why his work is characterized by a lack of depth perception. [16] 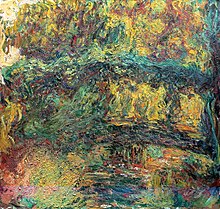 The Japanese Bridge by Claude Monet.

Edgar Degas was a French impressionist artist famous for his pastel drawings and oil paintings. In 1870, he began noticing signs of decreasing vision which is attested to retinal degeneration. [17] The blurriness of his later paintings is usually attributed to his condition.

Claude Monet was a French painter and founder of Impressionism. He is widely known for his Water Lilies series. From 1912 - 1922, his vision declined due to cataracts. This affected the colour perception of his images which makes many of his paintings appear slightly blurry and yellowish in tone. [18]

Pierre-Auguste Renoir was a French Impressionist artist. He is alleged to have had myopia. [19]

Georgia O'Keeffe was an American artist who experienced symptoms of age-related macular degeneration in 1964. In her later works she enlisted assistants to help in painting her work, but kept credit of her works to herself. [20]