From Wikipedia
https://en.wikipedia.org/wiki/Virtual_museum
Museum in a digital format 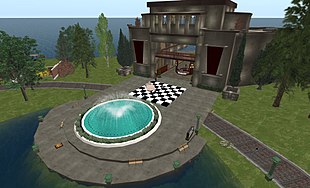 The Frank Lloyd Wright virtual museum in Second Life, in 2010 [1]

A virtual museum is a digital entity that draws on the characteristics of a museum, in order to complement, enhance, or augment the museum experience through personalization, interactivity, and richness of content. Virtual museums can perform as the digital footprint of a physical museum, or can act independently, while maintaining the authoritative status as bestowed by the International Council of Museums (ICOM) in its definition of a museum. In tandem with the ICOM mission of a physical museum, the virtual museum is also committed to public access; to both the knowledge systems imbedded in the collections and the systematic, and coherent organization of their display, as well as to their long-term preservation.

As with a traditional museum, a virtual museum can be designed around specific objects (such as an art museum or a natural history museum), or can consist of online exhibitions created from primary or secondary resources (as, for example in a science museum). Moreover, a virtual museum can refer to the mobile or World Wide Web offerings of traditional museums (e.g., displaying digital representations of its collections or exhibits); or can be born digital content such as, 3D environments, net art, virtual reality and digital art. Often, discussed in conjunction with other cultural institutions, a museum by definition, is essentially separate from its sister institutions such as a library or an archive. Virtual museums are usually, but not exclusively delivered electronically when they are denoted as online museums, hypermuseum, digital museum, cybermuseums or web museums.

The following museums were created with digital technology before the web gained any form of popularity or mass usability. CD-ROM and postal mail distribution made these museums available world-wide, before web browsers, fast connections and ubiquitous web usage.

The following online museums were pioneers. In the period, web pages were simpler, bandwidth was slower, the concepts of the online museum were still developing, and there were limited multimedia technologies available within web browsers. Some online museums began in non-website electronic forms and not all were established by existing physical museums. Many online museums have become significant sources of scholarly information, including extensive citations within Wikipedia.

Most physical museums now have an online presence with varying degrees of online information. At one end of the spectrum, museums may provide simple contact and background information plus a list of exhibitions (brochure museums). On the other end of the spectrum, there are museums that exist only online, or those that have a physical building but offer extensive online exhibits, interactive online features, multimedia, and searchable or browsable collections (content museums, learning museums, virtual museums). [23]

The following are a few other museums online:

The digitalization of museums is a task that has combined efforts, budgets and research from many museums, cultural associations and governments around the world. For the last few years, there have been projects related to Information Society Technologies dealing with: preservation of cultural heritage, restoration and learning resources. Some examples of contributions in the field of digital and virtual museography: Euromuse.net (EU), DigiCULT (EU), Musings, Digital Museums Projects. European Community has founded various projects to support this filed, like V-Must, the Virtual Museum Transnational Network that aims to provide the heritage sector with the tools and support to develop Virtual Museums that are educational, enjoyable, long-lasting and easy to maintain. [39]

In 2004, Roy Hawkey of King's College London reported that "Virtual visitors to museum websites already out-number physical (on-site) visitors, and many of these are engaged in dedicated learning". [40]

There are several types of interactive environments. One is to re-create 3D space with visual representations of the museum by a 3D architectural metaphor, which provides a sense of place using various spatial references. They usually use 3D modelling, VRML ( Virtual Reality Modelling Language) and now X3D(successor to VRML) for viewing. There have been introduced various kinds of imaging techniques for building virtual museums, such as infrared reflectography, X-ray imaging, 3D laser scanning, IBMR (Image Based Rendering and Modeling) techniques. In the case of EU-funded projects, the ViHAP3D, a new virtual reality system for scanning museum artifacts, has been developed by EU researchers.[ citation needed] Another interactive three-dimensional spatial environment is QTVR. Being a pre-rendered, fixed environment it is more restricted in regards to moving freely around in 3D space but the image quality can be superior to that of real-time rendered environments. This was especially the case in the mid-1990s when computing power and online speeds were limited.

In 2013, the National Museum of Australia and the Australian Commonwealth Scientific and Industrial Research Organisation (CSIRO) trialled a virtual museum tour system that uses mobile telepresence technology and requires a high-speed broadband connection. The technology allows remote visitors, for example school students from regional and remote Australia, to interact with a museum facilitator through a robot equipped with an omni-directional camera. Each remote visitor is able to control their own view of the museum gallery. [42] [43] [44]

Museums have a variety of top-level domain names. In the United States, many are .org. Some are .gov, or governmental domains for other countries. A few are .edu in the US, either as part of a larger educational institution, or grandfathered in when .edu regulations changed (e.g., as with the Exploratorium). The .museum domain name is used by some museums, as organized by MuseDoma, but is not widely used. [45]

Depending on the scientific position of the researchers, industry or instrumental use, virtual museums are regarded and used in different ways. For example, as a kind of creative activity; an innovative educational tool; a fashion or advertising project; а room with multimedia capabilities; the representation of the traditional Museum on the Internet; a gadget; the publication; website; type of communication; the electronic catalogue, etc. [46]