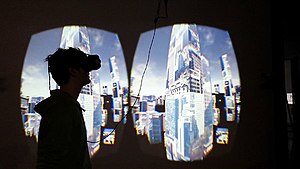 Virtual art is a term for the virtualization of art, made with the technical media developed at the end of the 1980s (or a bit before, in some cases). [2] These include human-machine interfaces such as visualization casks, stereoscopic spectacles and screens, digital painting and sculpture, generators of three-dimensional sound, data gloves, data clothes, position sensors, tactile and power feed-back systems, etc. [3] As virtual art covers such a wide array of mediums it is a catch-all term for specific focuses within it. Much contemporary art has become, in Frank Popper's terms, virtualized. [4]

Virtual art can be considered a post-convergent art form based on the bringing together of art and technology, thus containing all previous media as subsets. [5] Sharing this focus on art and technology are the books of Jack Burnham (Beyond Modern Sculpture 1968) and Gene Youngblood ( Expanded Cinema 1970). Since virtual art can consist of virtual reality, augmented reality, or mixed reality, it can be seen in other aspects of production such as video games and movies.

In his book, From Technological to Virtual Art, Frank Popper traces the development of immersive, interactive new media art from its historical antecedents through today's digital art, computer art, cybernetic art, multimedia art, and net art. Popper shows that contemporary virtual art is a further refinement of the technological art of the late twentieth century and also a departure from it. What is new about this new media art, he argues, is its humanization of technology, its emphasis on interactivity, its philosophical investigation of the real and the virtual, and its multisensory nature. [6] He argues further that what distinguishes the artists who practice virtual art from traditional artists is their combined commitment to aesthetics and technology. Their "extra-artistic" goals – linked to their aesthetic intentions – concern not only science and society but also basic human needs and drives. [7]

To explain and illustrate the emergence of a techno-aesthetic, Popper stresses the panoramic and multi-generational reach of virtual art. As regards to virtual art, openness is stressed both from the point of view of the artists and their creativity and from that of the follow-up users in their reciprocating thoughts and actions. This commitment to the teeming openness found in virtual art can be traced to the theories of Umberto Eco and other aestheticians.

In virtual worlds and entertainment

Virtual art can be seen in worlds like Second Life, and Inworldz virtual environments in which anything is possible to the user, who is represented by an avatar. In the virtual world, the avatar's abilities ranges from ordinary walking to flying. The environment and scenery of such environments is similar to the real world, except that it can be altered by the avatar. Worlds like Inworldz and Second Life feature an editor which allows the user to build his or her own experience just the way he or she wants it to be. The user is not bounded by physics or improbabilities that he or she faces in the real world.

Virtual art is made with many computer programs and has no boundaries, so it uses animations, movies, computer games and so on. As it becomes more and more popular and important, it results in people being able to live another virtual life. With the advancements in technology, virtual art has transformed and evolved quickly from simple 8-bit representations to 3D models containing millions of polygons.

In popular video games and movies