From Wikipedia, the free encyclopedia
Intersection of a torus and a plane 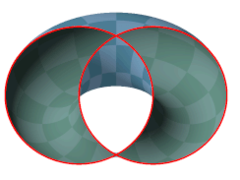 Villarceau circles as intersection of a torus and a plane

Cutting a torus with a special plane reveals a pair of circles, known as Villarceau circles. The cutting plane passes through the torus' center and touches the torus at two antipodal points; the circles intersect at these points.

In geometry, Villarceau circles ( /viːlɑːrˈsoʊ/) are a pair of circles produced by cutting a torus obliquely through the center at a special angle.

Given an arbitrary point on a torus, four circles can be drawn through it. One is in a plane parallel to the equatorial plane of the torus and another perpendicular to that plane (these are analogous to lines of latitude and longitude on the Earth). The other two are Villarceau circles. They are obtained as the intersection of the torus with a plane that passes through the center of the torus and touches it tangentially at two antipodal points. If one considers all these planes, one obtains two families of circles on the torus. Each of these families consists of disjoint circles that cover each point of the torus exactly once and thus forms a 1-dimensional foliation of the torus.

The Villarceau circles are named after the French astronomer and mathematician Yvon Villarceau (1813–1883) who wrote about them in 1848.

Mannheim (1903) showed that the Villarceau circles meet all of the parallel circular cross-sections of the torus at the same angle, a result that he said a Colonel Schoelcher had presented at a congress in 1891.

Consider a horizontal torus in xyz space, centered at the origin and with major radius 5 and minor radius 3. That means that the torus is the locus of some vertical circles of radius three whose centers are on a circle of radius five in the horizontal xy plane. Points on this torus satisfy this equation:

The slicing plane is chosen to be tangent to the torus at two points while passing through its center. It is tangent at (16⁄5, 0, 12⁄5) and at (−16⁄5, 0, −12⁄5). The angle of slicing is uniquely determined by the dimensions of the chosen torus. Rotating any one such plane around the z-axis gives all of the Villarceau circles for that torus. 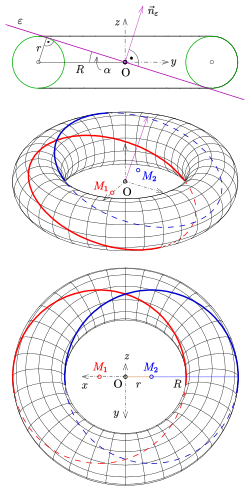 Torus: Villarceau circles
For the bottom picture the projection is orthogonal onto the section plane. Hence the true shape of the circles appear. 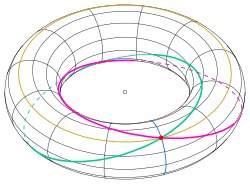 Villarceau circles (magenta, green) through a given point (red). For any point there exist 4 circles on the torus containing the point.

A proof of the circles’ existence can be constructed from the fact that the slicing plane is tangent to the torus at two points. One characterization of a torus is that it is a surface of revolution. Without loss of generality, choose a coordinate system so that the axis of revolution is the z axis. Begin with a circle of radius r in the xz plane, centered at (R, 0, 0).

The cross-section of the swept surface in the xz plane now includes a second circle.

This pair of circles has two common internal tangent lines, with slope at the origin found from the right triangle with hypotenuse R and opposite side r (which has its right angle at the point of tangency). Thus z/x equals ±r / (R2 − r2)1/2, and choosing the plus sign produces the equation of a plane bitangent to the torus.

By symmetry, rotations of this plane around the z axis give all the bitangent planes through the center. (There are also horizontal planes tangent to the top and bottom of the torus, each of which gives a “double circle”, but not Villarceau circles.)

We can calculate the intersection of the plane(s) with the torus analytically, and thus show that the result is a symmetric pair of circles, one of which is a circle of radius R centered at

A treatment along these lines can be found in Coxeter (1969).

A more abstract — and more flexible — approach was described by Hirsch (2002), using algebraic geometry in a projective setting. In the homogeneous quartic equation for the torus,

setting w to zero gives the intersection with the “plane at infinity”, and reduces the equation to

The torus plays a central role in the Hopf fibration of the 3-sphere, S3, over the ordinary sphere, S2, which has circles, S1, as fibers. When the 3-sphere is mapped to Euclidean 3-space by stereographic projection, the inverse image of a circle of latitude on S2 under the fiber map is a torus, and the fibers themselves are Villarceau circles. Banchoff (1990) has explored such a torus with computer graphics imagery. One of the unusual facts about the circles is that each links through all the others, not just in its own torus but in the collection filling all of space; Berger (1987) has a discussion and drawing.