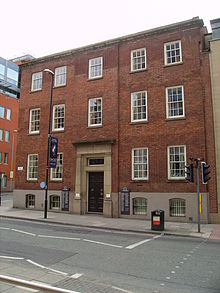 Owens College was founded in 1851, named after John Owens, a textile merchant, who left a bequest of £96,942 for the purpose. Its first accommodation was at Cobden House on Quay Street, Manchester, in a house which had been the residence of Richard Cobden. In 1859, Owens College was approved as a provincial examination centre for matriculation candidates of the University of London. [3] As the college progressed the premises became inadequate so a move to Chorlton on Medlock was planned in 1871. Alfred Waterhouse was the architect of the new college building, west of Oxford Road, which was opened in 1873. [a]

The new Victoria University of Manchester was established by royal charter on 15 July 1903; the university and Owens College were merged by Act of Parliament on 24 June 1904. The Manchester University Press was founded by James Tait in 1904 (as the Publications Committee of the University), initially to publish academic research being undertaken at the Victoria University of Manchester. The office was accommodated in a house in Lime Grove. [4] Distribution was then in the hands of Sherratt & Hughes of Manchester; from 1913 the distributors were Longmans, Green & Co. though this arrangement came to an end in the 1930s. The MUP offices moved several times to make way for other developments within the university. Since 1951 these have been Grove House, Oxford Road, [5] then the former University Dental Hospital of Manchester (illustrated) and until the present time the Manchester Medical School in Coupland Street.

In the mid-1960s the university and the city corporation commissioned Hugh Wilson and Lewis Womersley to produce a new plan for the campus. The final report was issued in 1966; it recommended removing traffic from Oxford Road to the adjacent main routes east and west, and building of the Precinct Centre – subsequently constructed in 1970–1972. [6] The Precinct Centre building included the oldest part of the Manchester Business School, Devonshire House and Crawford House and the St Peter's House, the University Chaplaincy. It stood on Booth Street East and Booth Street West and Oxford Road ran through it at ground level. The architects were Wilson & Womersley, in association with the university's planning officer, H. Thomas; for St Peter's House the architects were Cruickshank & Seward. [7] [8] [b] The Precinct Centre was the largest public building completed in the campus redevelopment, containing office and shopping space, a pub, library and post office amongst other town centre facilities, designed to separate human from traffic. [9]

The university had more than 18,000 full-time students (including 2500 international students from more than 120 countries) by the time it merged with UMIST. It was regarded as one of the top universities in the country, frequently achieving top ratings for research. [11]

See also Category:Vice-Chancellors of the Victoria University of Manchester

The chief officers of the university were the vice-chancellor, [12] the registrar, the bursar and the librarian. In later years many administrative changes were made that increased the independence of the Director of Estates and Services, the Director of the Manchester Computing Centre, and eventually combined the offices of registrar and bursar as that of registrar and secretary, the last holder of this post was Eddie Newcomb (1995–2004). [13]

Since the later 1800s, many notable people have worked and studied at the Victoria University of Manchester as, for example, Benedict Cumberbatch.

The motto of the university was Arduus ad solem, meaning "striving towards the sun". It is a metaphor for aspiring to enlightenment. It is quoted from Virgil's Aeneid, Book II, [15] and the archives do not record the reasons for its choice. [16] The original verse refers to a serpent and the sun, both of which featured in the university coat of arms. The serpent is traditionally associated with wisdom. The arms were granted in October 1871 to Owens College while the Victoria University had arms of its own which fell into abeyance from 1904 upon the merger of the college with the University.

According to Norman Marlow (A. N. Marlow, Senior Lecturer in Latin, Department of Classics at the university in the 1960s), the motto Arduus ad solem – taken from Aeneid II – was a play on words, relating to Manchester's geographical situation. The Virgilian context referred to Pyrrhus, appearing in shining armour 'like a snake which has sloughed its skin, reaching upwards with an effort towards the sun'; the motto was chosen by the Professor of Latin at the time ( Augustus Wilkins) and the coat of arms was applied for – suggesting both the idea of the institution striving towards excellence, and the city (with its particularly high annual rainfall) 'reaching upwards with difficulty towards the sun'.[ citation needed]

This is a list of books about the Victoria University of Manchester and its predecessor Owens College.