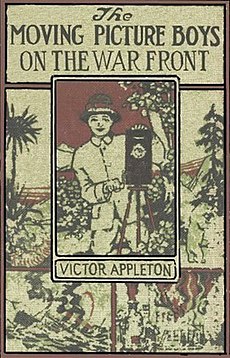 Cover of The Moving Picture Boys on the War Front

Victor Appleton was a house pseudonym used by the Stratemeyer Syndicate and its successors, most famous for being associated with the Tom Swift series of books. [1]

Wikisource has original works by or about:
Victor Appleton
Portal:
Retrieved from " https://en.wikipedia.org/?title=Victor_Appleton&oldid=1134329014"
Categories:
Hidden categories: