From Wikipedia
https://en.wikipedia.org/wiki/Vertex_(geometry)
Point where two or more curves, lines, or edges meet
For vertices in the geometry of curves, see Vertex (curve). For other uses of the word, see Vertex (disambiguation).

In geometry, a vertex (in plural form: vertices or vertexes), often denoted by letters such as

, is a point where two or more curves, lines, or edges meet. As a consequence of this definition, the point where two lines meet to form an angle and the corners of polygons and polyhedra are vertices. [1] [2] [3] 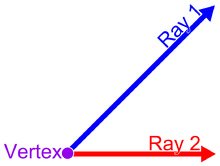 A vertex of an angle is the endpoint where two line or rays come together.

A vertex is a corner point of a polygon, polyhedron, or other higher-dimensional polytope, formed by the intersection of edges, faces or facets of the object. [4]

In a polygon, a vertex is called " convex" if the internal angle of the polygon (i.e., the angle formed by the two edges at the vertex with the polygon inside the angle) is less than π radians (180°, two right angles); otherwise, it is called "concave" or "reflex". [5] More generally, a vertex of a polyhedron or polytope is convex, if the intersection of the polyhedron or polytope with a sufficiently small sphere centered at the vertex is convex, and is concave otherwise.[ citation needed]

However, in graph theory, vertices may have fewer than two incident edges, which is usually not allowed for geometric vertices. There is also a connection between geometric vertices and the vertices of a curve, its points of extreme curvature: in some sense the vertices of a polygon are points of infinite curvature, and if a polygon is approximated by a smooth curve, there will be a point of extreme curvature near each polygon vertex. [7] However, a smooth curve approximation to a polygon will also have additional vertices, at the points where its curvature is minimal.[ citation needed]

Of a plane tiling 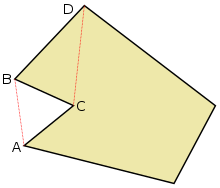 A principal vertex xi of a simple polygon P is called an ear if the diagonal [x(i − 1), x(i + 1)] that bridges xi lies entirely in P. (see also convex polygon) According to the two ears theorem, every simple polygon has at least two ears. [10]

A principal vertex xi of a simple polygon P is called a mouth if the diagonal [x(i − 1), x(i + 1)] lies outside the boundary of P.

Number of vertices of a polyhedron

In computer graphics, objects are often represented as triangulated polyhedra in which the object vertices are associated not only with three spatial coordinates but also with other graphical information necessary to render the object correctly, such as colors, reflectance properties, textures, and surface normal. [11] These properties are used in rendering by a vertex shader, part of the vertex pipeline.