From Wikipedia, the free encyclopedia
Speed and direction of a motion
This article is about velocity in physics. For other uses, see Velocity (disambiguation).

Velocity is the directional speed of an object in motion as an indication of its rate of change in position as observed from a particular frame of reference and as measured by a particular standard of time (e.g. 60  km/h northbound). Velocity is a fundamental concept in kinematics, the branch of classical mechanics that describes the motion of bodies.

Velocity is a physical vector quantity; both magnitude and direction are needed to define it. The scalar absolute value ( magnitude) of velocity is called speed, being a coherent derived unit whose quantity is measured in the SI ( metric system) as metres per second (m/s or m⋅s−1). For example, "5 metres per second" is a scalar, whereas "5 metres per second east" is a vector. If there is a change in speed, direction or both, then the object is said to be undergoing an acceleration.

For example, a car moving at a constant 20 kilometres per hour in a circular path has a constant speed, but does not have a constant velocity because its direction changes. Hence, the car is considered to be undergoing an acceleration.

Difference between speed and velocity 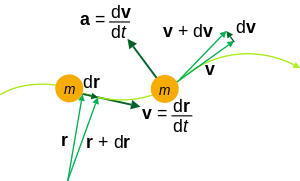 Speed, the scalar magnitude of a velocity vector, denotes only how fast an object is moving. [1] [2]

Velocity is defined as the rate of change of position with respect to time, which may also be referred to as the instantaneous velocity to emphasize the distinction from the average velocity. In some applications the average velocity of an object might be needed, that is to say, the constant velocity that would provide the same resultant displacement as a variable velocity in the same time interval, v(t), over some time period Δt. Average velocity can be calculated as:

The average velocity is always less than or equal to the average speed of an object. This can be seen by realizing that while distance is always strictly increasing, displacement can increase or decrease in magnitude as well as change direction.

The average velocity is the same as the velocity averaged over time – that is to say, its time-weighted average, which may be calculated as the time integral of the velocity:

where we may identify 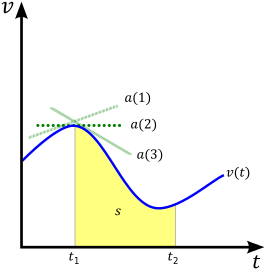 Example of a velocity vs. time graph, and the relationship between velocity v on the y-axis, acceleration a (the three green tangent lines represent the values for acceleration at different points along the curve) and displacement s (the yellow area under the curve.)

If we consider v as velocity and x as the displacement (change in position) vector, then we can express the (instantaneous) velocity of a particle or object, at any particular time t, as the derivative of the position with respect to time:

Since the derivative of the position with respect to time gives the change in position (in metres) divided by the change in time (in seconds), velocity is measured in metres per second (m/s). Although the concept of an instantaneous velocity might at first seem counter-intuitive, it may be thought of as the velocity that the object would continue to travel at if it stopped accelerating at that moment.

From there, we can obtain an expression for velocity as the area under an a(t) acceleration vs. time graph. As above, this is done using the concept of the integral:

In the special case of constant acceleration, velocity can be studied using the suvat equations. By considering a as being equal to some arbitrary constant vector, it is trivial to show that

It is also possible to derive an expression for the velocity independent of time, known as the Torricelli equation, as follows:

Quantities that are dependent on velocity

ignoring special relativity, where Ek is the kinetic energy and m is the mass. Kinetic energy is a scalar quantity as it depends on the square of the velocity, however a related quantity, momentum, is a vector and defined by

In special relativity, the dimensionless Lorentz factor appears frequently, and is given by

where γ is the Lorentz factor and c is the speed of light.

Escape velocity is the minimum speed a ballistic object needs to escape from a massive body such as Earth. It represents the kinetic energy that, when added to the object's gravitational potential energy (which is always negative), is equal to zero. The general formula for the escape velocity of an object at a distance r from the center of a planet with mass M is

where G is the gravitational constant and g is the gravitational acceleration. The escape velocity from Earth's surface is about 11 200 m/s, and is irrespective of the direction of the object. This makes "escape velocity" somewhat of a misnomer, as the more correct term would be "escape speed": any object attaining a velocity of that magnitude, irrespective of atmosphere, will leave the vicinity of the base body as long as it doesn't intersect with something in its path.

Usually, the inertial frame chosen is that in which the latter of the two mentioned objects is in rest.

In the one-dimensional case, [3] the velocities are scalars and the equation is either:

, if the two objects are moving in opposite directions, or:

, if the two objects are moving in the same direction. 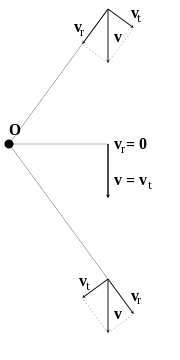 In polar coordinates, a two-dimensional velocity is described by a radial velocity, defined as the component of velocity away from or toward the origin (also known as velocity made good), and an angular velocity, which is the rate of rotation about the origin (with positive quantities representing counter-clockwise rotation and negative quantities representing clockwise rotation, in a right-handed coordinate system).

The radial and angular velocities can be derived from the Cartesian velocity and displacement vectors by decomposing the velocity vector into radial and transverse components. The transverse velocity is the component of velocity along a circle centered at the origin.

The magnitude of the radial velocity is the dot product of the velocity vector and the unit vector in the direction of the displacement.

The magnitude of the transverse velocity is that of the cross product of the unit vector in the direction of the displacement and the velocity vector. It is also the product of the angular speed

and the magnitude of the displacement.

is known as moment of inertia. If forces are in the radial direction only with an inverse square dependence, as in the case of a gravitational orbit, angular momentum is constant, and transverse speed is inversely proportional to the distance, angular speed is inversely proportional to the distance squared, and the rate at which area is swept out is constant. These relations are known as Kepler's laws of planetary motion.