From Wikipedia, the free encyclopedia
Clade of land plants with xylem and phloem

Vascular plants (from Latin vasculum 'duct'), also called tracheophytes ( /trəˈkiː.əˌfaɪts/) [5] [6] or collectively Tracheophyta (from Ancient Greek τραχεῖα ἀρτηρία (trakheîa artēría) 'windpipe', and φυτά (phutá) 'plants'), [6] form a large group of land plants ( c. 300,000 accepted known species) [7] that have lignified tissues (the xylem) for conducting water and minerals throughout the plant. They also have a specialized non-lignified tissue (the phloem) to conduct products of photosynthesis. Vascular plants include the clubmosses, horsetails, ferns, gymnosperms (including conifers), and angiosperms ( flowering plants). Scientific names for the group include Tracheophyta, [8] [4]: 251  Tracheobionta [9] and Equisetopsida sensu lato. Some early land plants (the rhyniophytes) had less developed vascular tissue; the term eutracheophyte has been used for all other vascular plants, including all living ones.

Historically, vascular plants were known as "higher plants", as it was believed that they were further evolved than other plants due to being more complex organisms. However, this is an antiquated remnant of the obsolete scala naturae, and the term is generally considered to be unscientific. [10]

Cavalier-Smith (1998) treated the Tracheophyta as a phylum or botanical division encompassing two of these characteristics defined by the Latin phrase "facies diploida xylem et phloem instructa" (diploid phase with xylem and phloem). [4]: 251

One possible mechanism for the presumed evolution from emphasis on haploid generation to emphasis on diploid generation is the greater efficiency in spore dispersal with more complex diploid structures. Elaboration of the spore stalk enabled the production of more spores and the development of the ability to release them higher and to broadcast them farther. Such developments may include more photosynthetic area for the spore-bearing structure, the ability to grow independent roots, woody structure for support, and more branching.[ citation needed]

This phylogeny is supported by several molecular studies. [14] [16] [17] Other researchers state that taking fossils into account leads to different conclusions, for example that the ferns (Pteridophyta) are not monophyletic. [18]

Hao and Xue presented an alternative phylogeny in 2013 for pre- euphyllophyte plants. [19] 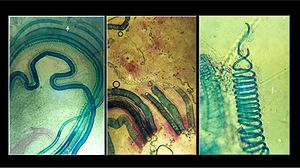 Photographs showing xylem elements in the shoot of a fig tree (Ficus alba): crushed in hydrochloric acid, between slides and cover slips

Water and nutrients in the form of inorganic solutes are drawn up from the soil by the roots and transported throughout the plant by the xylem. Organic compounds such as sucrose produced by photosynthesis in leaves are distributed by the phloem sieve-tube elements.

The xylem consists of vessels in flowering plants and of tracheids in other vascular plants. Xylem cells are dead hard-walled hollow cells arranged to form files of tubes that function in the transport of water. A tracheid cell-wall usually contains the polymer lignin.

The most abundant compound in all plants, as in all cellular organisms, is water, which has an important structural role and a vital role in plant metabolism. Transpiration is the main process of water movement within plant tissues. Plants constantly transpire water through their stomata to the atmosphere and replace that water with soil moisture taken up by their roots. The movement of water out of the leaf stomata sets up a transpiration pull or tension in the water-column in the xylem vessels or tracheids. The pull is the result of water surface tension within the cell walls of the mesophyll cells, from the surfaces of which evaporation takes place when the stomata are open. Hydrogen bonds exist between water molecules, causing them to line up; as the molecules at the top of the plant evaporate, each pulls the next one up to replace it, which in turn pulls on the next one in line. The draw of water upwards may be entirely passive and can be assisted by the movement of water into the roots via osmosis. Consequently, transpiration requires the plant to expend very little energy on water movement. Transpiration assists the plant in absorbing nutrients from the soil as soluble salts.

Living root cells passively absorb water in the absence of transpiration pull via osmosis creating root pressure. It is possible for there to be no evapotranspiration and therefore no pull of water towards the shoots and leaves. This is usually due to high temperatures, high humidity, darkness or drought.[ citation needed]

Xylem and phloem tissues each play a part in the conduction processes within plants. Sugars are conducted throughout the plant in the phloem; water and other nutrients through the xylem. Conduction occurs from a source to a sink for each separate nutrient. Sugars are produced in the leaves (a source) by photosynthesis and transported to the growing shoots and roots (sinks) for use in growth, cellular respiration or storage. Minerals are absorbed in the roots (a source) and transported to the shoots to allow cell division and growth. [20]