listen)), also known as West Gothland or the Latinized version Westrogothia in older literature, [2] is one of the 25 traditional non-administrative provinces of Sweden (landskap in Swedish), situated in the southwest of Sweden.

Västergötland is home to Gothenburg, the second largest city in Sweden, which is situated along a short stretch of the Kattegat strait. The province is bordered by Bohuslän, Dalsland, Värmland, Närke, Östergötland, Småland and Halland, as well as the two largest Swedish lakes Vänern and Vättern. Victoria, Crown Princess of Sweden is Duchess of Västergötland.

The provinces of Sweden serve no administrative function. Instead, that function is served by counties of Sweden. From the 17th century up until 31 December 1997, Västergötland was divided into Skaraborg County, Älvsborg County and a minor part of Gothenburg and Bohus County. From 1 January 1998 nearly all of the province is in the newly created Västra Götaland County, with the exception of Habo Municipality and Mullsjö Municipality, which were transferred to Jönköping County, and smaller parts of the province which are in Halland County and Örebro County.

Västergötland was granted its arms at the time of the funeral of King Gustav Vasa in 1560. The province is also a duchy and the arms can be represented with the ducal coronet. Blazon: "Per bend sinister Sable and Or, a Lion rampant counterchanged langued and armed Gules between two Mullets Argent in the Sable field."

The southern and eastern part of the province is dominated by hills, belonging to the southern Swedish highlands. In geological terms southern Västergötland is made up of northward tilted surfaces of the Sub-Cambrian peneplain making up the flank of the Southern Swedish Dome. [3] 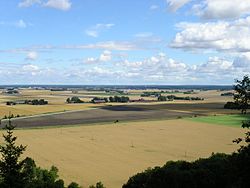 Summertime agricultural landscape around Flo, south of Vänern. These plains are part of the geographical Central Swedish lowland and the geological Sub-Cambrian peneplain.

The northern and western portions of the province belong to the Central Swedish lowland, which in this part is referred to as the Västgöta-plains or Västgötaslätten. Characteristic for these lowlands in Västergötland is that they contain hills made up Silurian-aged sedimentary rock. These are; Kinnekulle, Halleberg, Hunneberg and Billingen. [4]

Along the Kattegat lies the archipelago usually known as the Gothenburg archipelago. The southern part of it, belonging to Gothenburg Municipality, is part of Västergötland.

The northwestern border is demarcated by Sweden's largest lake Vänern, and the north-eastern border is demarcated by Sweden's second largest lake Vättern. Within the province the shoreline of Lake Vänern is 330 kilometres (210 mi) long, and along Vättern it is 130 km (81 mi). The largest river is Göta älv which drains Vänern to the east shore and the Kattegat strait; along the river several important cities and towns have been situated for centuries.

There are many ancient remains in Västergötland. Among the most notable of these remains are the dolmens from the Funnelbeaker culture, in the Falköping area south of lake Vänern. Finnestorp, near Larv, was a weapons sacrificial site from the Iron Age. [5]

The population of Västergötland, the Geats appear in the writings of the Greek Ptolemaios (as Goutai), and they appear as Gautigoths in Jordanes' work in the 6th century. The province of Västergötland represents the heartland of Götaland, once an independent petty kingdom with a long line of Geatish kings. These are mainly described in foreign sources (Frankish) and through legends. It is possible that Västergötland had the same king as the rest of Sweden at the time of the monk Ansgar's mission to Sweden in the 9th century, but both the date and nature of its inclusion into the Swedish kingdom is a matter of much debate. Some date it as early as the 6th century, based on the Swedish-Geatish wars in Beowulf epos; others date it as late as the 12th century. 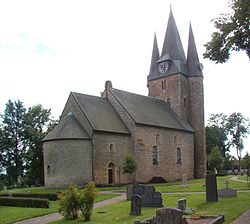 Västergötland received much early influence from the British Isles and is generally considered to be the bridgehead of Christianity's advance into Sweden. Recent excavations at Varnhem suggest that at least its central parts were Christian in the 9th century. [6] Around 1000, King Olof Skötkonung is held to have received baptism in Husaby, near lake Vänern. However, the Christianization was met with heavy opposition in the rest of his kingdom, and so Olof had to restrict the Christian activities to Västergötland. The Christian faith spread, and by the time the provincial law Västgötalagen was written in the 13th century, Västergötland had 517 churches. The seat of the area's diocese seems to originally have been Husaby, but since 1150 the city of Skara (just some 20 kilometers south) held that distinction.

From the election of King Stenkil in the 11th century, Swedish and Geatish dynasties vied for the control of Sweden during long civil wars. For instance, the Swedish king Ragnvald Knaphövde was elected king by the Swedes, but when he entered Västergötland, he chose not to demand hostage from the powerful Geatish clans and was slain by the Geats near Falköping. Several times, Västergötland was independent from Sweden with kings such as Inge I of Sweden and Magnus the Strong. In later years the area was progressively tied more closely to the Swedish kingdom.

Being in peace with the rest of Sweden did not mean being in peace. Located along the borders of Denmark (with the so-called Scanian lands) and Norway (with Bohuslän), the area was often involved in armed disputes and invaded by hostile armies.

In 1658 the current borders of Sweden were established when Sweden annexed both the Scanian lands and Bohuslän. Västergötland became less exposed as it was further from the country borders. Seaside battles at the end of Scanian War in the 1670s was the last combat on Västergötland soil.

16th century and after

In 1634 the province was modernized with the establishment of two counties: Skaraborg County (with Skara as capital) and Älvsborg County (Capital first in Gothenburg but after 1679 in Vänersborg).

In Västergötland the Götamål dialect of Swedish is spoken. The dialect has several varieties like the ones spoken in Gothenburg and Sjuhärad, but the main dialectal variety is the Western Götaland dialect, Västgötska.

The dialect was first dealt with as early as 1772, by S. Hofs in his Dialectus vestrogothica, which was a vocabulary with a grammar introduction.

Läckö Castle is situated on the island Kållandsö in the Vänern lake. It is generally regarded as one of Sweden's finest Baroque castles. The island was actually the location of a fortress as early as 1298, but the current building was begun in 1615, supervised first by Jacob De la Gardie and then finished by his son Magnus Gabriel de la Gardie.

Karlsborg Fortress, the largest fortress in Europe, is situated in the town of Karlsborg. [7] It is a testament to the "Central Defence Principle" of the 19th century, a reaction to the loss of Finland as a buffer state in 1809.

Bjurum manor, one of the largest Swedish manors in the country, is located in Västergötland.

Skara Cathedral is the oldest cathedral in the original parts of Sweden, i.e. if Scania is not included.

The cities of Sweden were formerly chartered entities with certain privileges. Today they are municipalities.

The largest city, Gothenburg, is located by the western shore with a significant harbour commerce.