Crater Lake is a volcanic caldera in Oregon, US

Barringer Crater, also known as Meteor Crater, is an impact crater in Arizona, US 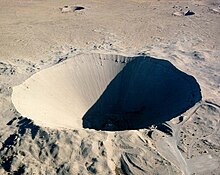 Sedan Crater is from a 1962 nuclear test explosion in Nevada, US

Summit crater at the top of Mt Fuji in Japan

Soda Lakes are a pair of volcanic maars in Nevada, US

Categorization of craters has been a source of recurring confusion over the years on Wikipedia. This essay presents lessons learned and best practices for creating and using categories about various kinds of craters. It also includes advice on what not to categorize as a crater.

The dictionary definitions of a crater require, for geological uses, that it must have been caused by some kind of explosion or eruption. [1] [2]

The source of the confusion comes from the use of the word "crater" for several unrelated geological processes involving asteroid impacts, volcanic eruptions, or nuclear and chemical explosions. Over the years, many editors have looked at a topic and referred to it just as a "crater", leading to jumbled, disorganized categories containing articles and files with a mix of all kinds.

There are also some geological formations and map illusions which commonly are mistaken for craters. So this page will also point out items which should not be categorized as any kind of crater, and where to put them instead.

In 2009, there were categories with names like "Craters", "Craters by country", "Craters of Canada", etc. Those categories had instruction that they were just for impact craters. But articles for other kinds of craters were continually being added to them by well-meaning editors who either didn't read or didn't understand the directions. Discussion led to a mass-renaming of 76 categories so those all had "impact craters" in their names, instead of just "craters". That worked well at resolving the confusion.

Cleaning up the categories and answering questions has led to some advice: 1) don't just use "crater" without a type in a category name, and 2) re-created categories were marked as disambiguation or redirect to help editors find the right category.

Category name must include crater type

The big lesson learned from the 2009 mass renaming was categories about craters must include the type of crater in the name. They can be impact, volcanic or explosion craters, but not just craters. [1] [2] Otherwise it turns out to be too easy to find for editors to use tools like HotCat that only show the name of the category and none of the instructions on the category text. (See Types of craters below.)

Crater lakes have the same issues as craters, and should also be placed in qualified categories.

Another lesson was learned 10 years after the renaming in 2019, after some of the original category names were re-created. Category:Craters started to fill up with a confusing mix of miscellaneous subcategories and articles again. After cleaning it out, instead of proposing to delete it, it was kept as a disambiguation category. It has specific instructions to use the specific category tree for the type of crater: Category:Impact craters, Category:Volcanic craters or Category:Explosion craters.

Also, Category:Craters on Earth was emptied and turned into a templated redirect to Category:Impact craters on Earth. If it had been deleted, it would eventually have been re-created too. So the redirect tells future editors the right place to go.

So instead of just using the word "crater", now we know to specify which of several types of geological formations we mean:

Other formations, even if resembling craters, are considered depressions, not craters.

Impact craters are scientifically relatively new. Understanding of the geological structure and methods to prove or disprove an impact only began to be learned in the 1960s. This subfield of geology was originally established by Eugene Shoemaker when he found that Arizona's Meteor Crater had the same overturned structures and shocked minerals as Nevada's nuclear test craters, only much bigger. A detailed overview of the science of impact cratering is publicly available in the Lunar and Planetary Institute's e-book " Traces of Catastrophe", which is available for free download. [3]

Lakes in impact craters should be categorized under Category:Impact crater lakes.

There is another common confusion when the news media reports a newly-discovered impact crater. Invariably, someone makes a good faith edit citing the news article and claiming the new crater is confirmed. But there is always more peer review to do at that point. So Wikipedia editors don't decide what is a confirmed impact - interpreting the evidence is just too easy to fall into a trap of original research.

All other impact craters and structures, whether theorized or published in scientific journals and not (yet) listed in EID, go under Category:Possible impact craters on Earth.

However, there are lots of geological processes which can make circular or apparently circular features. Seeing a round feature on a map is not good enough to call something a crater, or even necessarily theorize about an asteroid impact. The rocks at the site have to be studied to seriously consider a new impact theory. [3]

Impact craters on other astronomical bodies

Some different eruption processes cause different types of volcanic craters, large and small.

There have been some cases of confusion by editors who wanted to call a sinkhole a type of crater. They aren't craters because they aren't the result of an explosion. [1] [2] They should go under Category:Sinkholes. Cave collapses are considered sinkholes, by definition.

Any other kind of depression which is not a crater should be categorized under Category:Depressions (geology).

The following Categories for Discussion items establish background and consensus around categorization of craters.