From Wikipedia
https://en.wikipedia.org/wiki/Upper_Paleolithic
Subdivision of the Paleolithic or Old Stone Age

The Upper Paleolithic (or Upper Palaeolithic) is the third and last subdivision of the Paleolithic or Old Stone Age. Very broadly, it dates to between 50,000 and 12,000 years ago (the beginning of the Holocene), according to some theories coinciding with the appearance of behavioral modernity in early modern humans, [1] until the advent of the Neolithic Revolution and agriculture.

Anatomically modern humans (i.e. Homo sapiens) are believed to have emerged in Africa around 300,000 years ago, it has been argued by some that their ways of life changed relatively little from that of archaic humans of the Middle Paleolithic, [2] until about 50,000 years ago, when there was a marked increase in the diversity of artefacts found associated with modern human remains. This period coincides with the most common date assigned to expansion of modern humans from Africa throughout Asia and Eurasia, which contributed to the extinction of the Neanderthals.

The Upper Paleolithic has the earliest known evidence of organized settlements, in the form of campsites, some with storage pits. Artistic work blossomed, with cave painting, petroglyphs, carvings and engravings on bone or ivory. The first evidence of human fishing is also found, from artefacts in places such as Blombos cave in South Africa. More complex social groupings emerged, supported by more varied and reliable food sources and specialized tool types. This probably contributed to increasing group identification or ethnicity. [3]

The peopling of Australia most likely took place before c. 60 ka. Europe was peopled after c. 45 ka. Anatomically modern humans are known to have expanded northward into Siberia as far as the 58th parallel by about 45 ka ( Ust'-Ishim man). The Upper Paleolithic is divided by the Last Glacial Maximum (LGM), from about 25 to 15 ka. The peopling of the Americas occurred during this time, with East and Central Asia populations reaching the Bering land bridge after about 35 ka, and expanding into the Americas by about 15 ka. In Western Eurasia, the Paleolithic eases into the so-called Epipaleolithic or Mesolithic from the end of the LGM, beginning 15 ka. The Holocene glacial retreat begins 11.7 ka ( 10th millennium BC), falling well into the Old World Epipaleolithic, and marking the beginning of the earliest forms of farming in the Fertile Crescent.

Both Homo erectus and Neanderthals used the same crude stone tools. Archaeologist Richard G. Klein, who has worked extensively on ancient stone tools, describes the stone tool kit of archaic hominids as impossible to categorize. He argues that almost everywhere, whether Asia, Africa or Europe, before 50,000 years ago all the stone tools are much alike and unsophisticated. 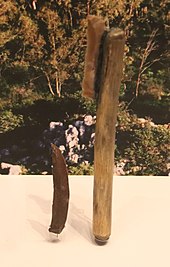 Firstly among the artefacts of Africa, archeologists found they could differentiate and classify those of less than 50,000 years into many different categories, such as projectile points, engraving tools, knife blades, and drilling and piercing tools. These new stone-tool types have been described as being distinctly differentiated from each other; each tool had a specific purpose. The early modern humans who expanded into Europe, commonly referred to as the Cro-Magnons, left many sophisticated stone tools, carved and engraved pieces on bone, ivory and antler, cave paintings and Venus figurines. [4] [5] [1]

Settlements were often located in narrow valley bottoms, possibly associated with hunting of passing herds of animals. Some of them may have been occupied year round, though more commonly they appear to have been used seasonally; people moved between the sites to exploit different food sources at different times of the year. Hunting was important, and caribou/wild reindeer "may well be the species of single greatest importance in the entire anthropological literature on hunting." [7]

Technological advances included significant developments in flint tool manufacturing, with industries based on fine blades rather than simpler and shorter flakes. Burins and racloirs were used to work bone, antler and hides. Advanced darts and harpoons also appear in this period, along with the fish hook, the oil lamp, rope, and the eyed needle. Fishing of pelagic fish species and navigating the open ocean is evidenced by sites from Timor and Buka ( Solomon Islands).

The changes in human behavior have been attributed to changes in climate, encompassing a number of global temperature drops. These led to a worsening of the already bitter cold of the last glacial period (popularly but incorrectly called the last ice age). Such changes may have reduced the supply of usable timber and forced people to look at other materials. In addition, flint becomes brittle at low temperatures and may not have functioned as a tool.

Changes in climate and geography 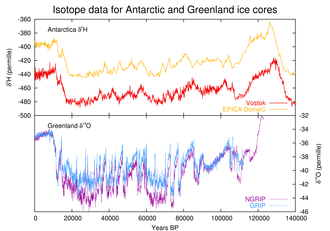 The Upper Paleolithic covered the second half of the Last glacial period from 50,000 to 10,000 before present, until the warming of the Holocene. Ice core data from Antarctica and Greenland.

The climate of the period in Europe saw dramatic changes, and included the Last Glacial Maximum, the coldest phase of the last glacial period, which lasted from about 26.5 to 19 kya, being coldest at the end, before relatively rapid warming (all dates vary somewhat for different areas, and in different studies). During the Maximum, most of Northern Europe was covered by an ice-sheet, forcing human populations into the areas known as Last Glacial Maximum refugia, including modern Italy and the Balkans, parts of the Iberian Peninsula and areas around the Black Sea.

This period saw cultures such as the Solutrean in France and Spain. Human life may have continued on top of the ice sheet, but we know next to nothing about it, and very little about the human life that preceded the European glaciers. In the early part of the period, up to about 30 kya, the Mousterian Pluvial made northern Africa, including the Sahara, well-watered and with lower temperatures than today; after the end of the Pluvial the Sahara became arid. 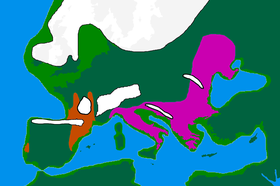 The Last Glacial Maximum was followed by the Allerød oscillation, a warm and moist global interstadial that occurred around 13.5 to 13.8 kya. Then there was a very rapid onset, perhaps within as little as a decade, of the cold and dry Younger Dryas climate period, giving sub-arctic conditions to much of northern Europe. The Preboreal rise in temperatures also began sharply around 10.3 kya, and by its end around 9.0 kya had brought temperatures nearly to present day levels, although the climate was wetter.[ citation needed] This period saw the Upper Paleolithic give way to the start of the following Mesolithic cultural period.

As the glaciers receded sea levels rose; the English Channel, Irish Sea and North Sea were land at this time, and the Black Sea a fresh-water lake. In particular the Atlantic coastline was initially far out to sea in modern terms in most areas, though the Mediterranean coastline has retreated far less, except in the north of the Adriatic and the Aegean. The rise in sea levels continued until at least 7.5 kya ( 5500 BC), so evidence of human activity along Europe's coasts in the Upper Paleolithic is mostly lost, though some traces have been recovered by fishing boats and marine archaeology, especially from Doggerland, the lost area beneath the North Sea.[ citation needed] 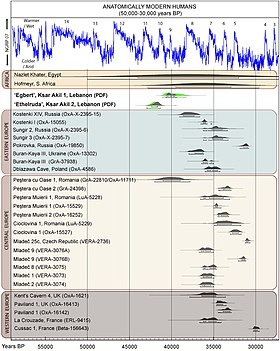 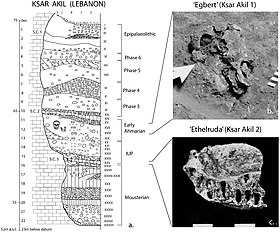 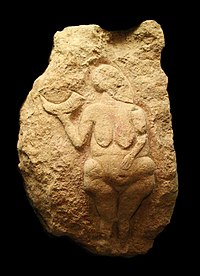 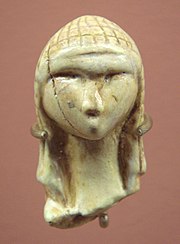 The Venus of Brassempouy is preserved in the Musée d'Archéologie Nationale at Saint-Germain-en-Laye, near Paris. 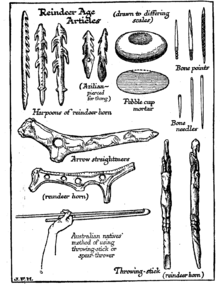 The Upper Paleolithic in the Franco-Cantabrian region: