From Wikipedia
https://en.wikipedia.org/wiki/Upper_Darby_Township,_Delaware_County,_Pennsylvania
Not to be confused with Darby Township, Delaware County, Pennsylvania or Darby, Pennsylvania.
Place in Pennsylvania, United States

As of the 2020 census, the township had a total population of 85,681, making it the sixth most populated city or borough in Pennsylvania, after Philadelphia, Pittsburgh, Allentown, Reading, and Erie. [5] Upper Darby is 65% residential, 25% commercial, and 8% other.

Because of a home-rule charter adopted in 1974 and effective in 1976, [3] Upper Darby utilizes a mayor-council form of management, unlike communities that are still under the Pennsylvania Township Code. First Class townships in Pennsylvania have a board of commissioners and are divided into wards, and Second Class townships have a board of supervisors, which are usually elected at-large. 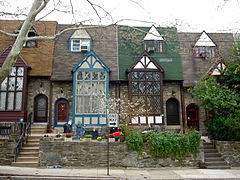 In 1650, the area that eventually became Upper Darby had been inhabited by the Lenape tribe of Native Americans for thousands of years. The Lenape were part of the larger late Woodland culture, living in longhouses and birch bark homes, and engaging in the type of agriculture featuring companion planting of the Three Sisters (winter squash, maize, and beans).[ citation needed]

The first permanent Europeans settlers arrived in late 1653 with a group from New Sweden. Soon after, in 1655, New Sweden was taken over by the Dutch, and then came under English rule in October 1664 as part of England's overall conquest of New Amsterdam. The region was controlled as a possession of the English king until it was included in a large land grant to William Penn in 1681.

Upon Penn's founding of the colony of Pennsylvania the next year, the area was designated as part of the municipality of Darby Township, in Chester County. It was subsequently part of the eastern section of that county which was split off on September 26, 1789, to form Delaware County. [6]

The Lower Swedish Cabin, thought to have been built in 1654, is located on Creek Road along the Darby Creek and is believed by many to be a remnant of the early Swedes, who introduced the log cabin to this area. Today the "Swedish Cabin" is designated with a Pennsylvania Historical Marker. The Cabin is also on the National Register of Historic Places. [7]

Division of Upper and Lower Darby

Darby Township originally occupied the area between the current border of Upper Darby to the north, Cobbs Creek and then Darby Creek to the east and south, and Ridley and Springfield townships to the west. This continued until 1736, when, for the convenience of the inhabitants, it was decided at a town meeting to separate the upper part from the lower "in all matters save the levies made for the support of the poor," with the northern part thereafter to be called Upper Darby Township. The exact boundary was not established until 1787, when a petition was presented to the court. The following is an excerpt from this petition:

The abundance of creeks and streams in the area favored the development of mills, and it was in Upper Darby that some of the first mills in Delaware County could be found. Some notable examples were the Cardington Mills in the Cardington section of the township and the Kent Mills in the Kellyville section. The site of the former Kent Mills is now a recreation area and dog park known as Kent Park.

One notable local mill owner was the Garrett family, who owned mills along the Darby Creek.

In addition to mills, the township was part of a region that was home to rock quarries, factories, and other various industrial concerns. Not only did this industrialization greatly increase the population of the township (from just over 800 in 1800 to almost 5,000 by 1890), it also spurred residential and commercial development and attracted an influx of European immigrants. To serve this influx, churches were founded across the township. One notable example of these is Saint Charles Boromeo, founded by local mill owner Charles Kelly to serve his largely Catholic workforce.

The township's population explosion turned out to be a double-edged sword as beginning in 1885, the township lost large sections of territory as the citizens of more populated neighborhoods petitioned the state to be recognized as separate municipalities. The first of these was the borough of Clifton Heights (incorporated on June 1, 1885), followed by the boroughs of Lansdowne (July 6, 1893), Aldan (September 22, 1893), Millbourne (October 12, 1909), and East Lansdowne (June 3, 1911). Part of the territory of Aldan was also taken from Darby Township.

Underground Railroad and the Civil War

The Abe Pennock House was a stop on the Underground Railroad

Reflecting the Quaker background of its earliest English settlers, Upper Darby was active in the antislavery movement. At least one abolition society existed prior to 1830, and sent a committee of twelve prominent citizens to the 1830 meeting of the Pennsylvania Anti-Slavery Society in Philadelphia. [9]

Many homes in the area were stops on the Underground Railroad, including Hoodland, the home of abolitionist Thomas Pennock, which was eventually bequeathed to the township's public library and which currently houses the children's library, connected to a much larger modern annex which houses the Main Branch. Another prominent abolitionist, Thomas Garrett, grew up in Upper Darby and Thornfield, his home until the age of 32, still stands at Garrett Road and Maple Avenue in the Drexel Hill neighborhood.

In 1907, the Philadelphia Rapid Transit Company recognized the potential for growth in the township and extended the Market-Frankford elevated train line (or "El") from just west of the Schuylkill River in Philadelphia to 69th and Market Streets in Upper Darby. The El terminus at 69th Street Station became a busy terminal serving several trolley and light rail lines into the suburbs, as well as numerous city and suburban bus routes. Commuter traffic spurred the development of the 69th St. shopping district in the 1920s by John McClatchy, and made Upper Darby the second busiest shopping area in the region, second only to Center City Philadelphia. The business district is noted for many fine examples of Art Deco style buildings. A population explosion in the township followed; by the 1960s, Upper Darby was the seventh most populous municipality in Pennsylvania. [10] 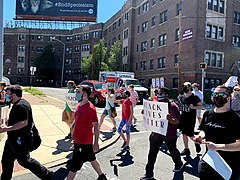 Protesters marching in Upper Darby in June 2020, in response to the murder of George Floyd

In the early 1970s, students from Highland Park Elementary School began a campaign to have the Pennsylvania Firefly declared the official state insect of Pennsylvania. With advice and support from state legislators, the students began a campaign that included letter writing, the circulation of petitions, and the distribution of bumper stickers. On April 10, 1974, Governor Milton J. Shapp signed their bill making the Pennsylvania Firefly their state's official insect. A couple of years later, Highland Park Elementary School was presented with a bronze plaque in honor of the students' achievement. [11] [12]

In the wake of the 2020 racial uprising in response to the murder of George Floyd, several protests and actions took place in Upper Darby, including a die-in at 69th and Market Streets. [13]

Upper Darby has seen a rise in LGBTQ activism of late, and Upper Darby Pride, a non-profit organization planned the first Upper Darby Pride Fest for June 2020. It was cancelled due to the pandemic but held a year later by U.D.T.J. on the grounds of Upper Darby High School and accompanied by other Pride events in the township. [14]

In 1991, five Upper Darby policemen were convicted in federal court and sentenced to prison for violating the civil rights of two residents, a father and son. Each was found guilty on several counts involving assault, false arrest, and prosecution. [15]

On January 30, 2002, Upper Darby police officer Dennis McNamara was shot and killed in the line of duty by Thomas Campbell. McNamara was investigating a suspicious parked vehicle around 9:30 PM when Campbell came up behind him and shot him in the side of the head with a .32 caliber revolver. McNamara had a section of Lansdowne Avenue renamed in his honor; Campbell pled guilty to his murder in 2003 and was sentenced to life in prison plus ten years. He died in Graterford Prison in 2015. [16] 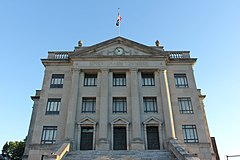 The Tower Theater, located in Terminal Square at the intersection of 69th and Ludlow Streets, opened as a movie and vaudeville theater in 1927. After closing briefly, the Tower reopened as a concert venue in 1972, and has hosted acts including the first American tours of David Bowie and Genesis. In addition to musical acts, the Tower has hosted comedians such as Trevor Noah and Jim Norton. In 2018, Rolling Stone listed the Tower as one of the 10 best live music venues in the United States. [17]

Upper Darby Summer Stage is one of the nation's oldest youth theater programs. [18]

The Upper Darby International Festival is an annual event held in September on 69th Street. The festival features performances, artwork, and food reflecting the diverse cultural backgrounds of the Upper Darby community. [19]

Opened in 2018, the Upper Darby Art Gallery in the Highland Park neighborhood features local, national and international artists and works, as well as art classes.

Centered in Terminal Square and the West Chester Pike business districts, Upper Darby restaurants feature a diverse range of cuisines including Vietnamese, Thai, Japanese, Liberian, Indian, Italian, Korean, Mexican, and Colombian. The community is also known for its Irish pubs, and the Llanerch Diner was the setting for a pivotal scene in the film Silver Linings Playbook.

The Philadelphia Museum of Art opened the first branch museum in the United States, modeled on the Carnegie Library branch system, on 69th Street. The 69th Street Branch of the PMA operated from 1930 to 1933. [20]

The University of Pennsylvania operated the Flower and Clark Observatory in the Highland Park neighborhood from 1897 to 1956, the site is now known as Observatory Park. [21] 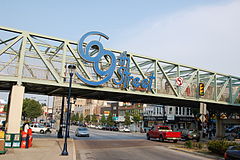 PA 3 eastbound in Upper Darby, with the Philadelphia skyline in the background

According to the U.S. Census Bureau, the township has a total area of 7.9 square miles (20.4 km2). The township lies on the edge of the Piedmont slightly above the City of Philadelphia (60 to 260 ft or 18 to 79 m above sea level). The area is crossed by several small creeks. The borough of East Lansdowne, Pennsylvania is an enclave completely surrounded by Upper Darby Township; additionally, an exclave of Upper Darby Township is separated from the rest of the township.

Pennsylvania Route 3, which links Philadelphia and West Chester passes through Upper Darby as Market Street and the West Chester Pike. 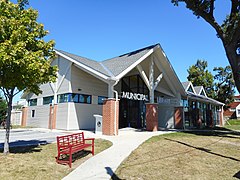 Upper Darby houses of worship include Protestant Christian, Catholic, Greek Orthodox churches, Sikhism and their Gurdwara, and an Islamic center. 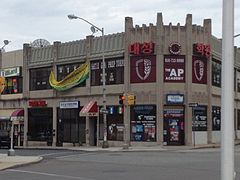 Upper Darby, along with Cheltenham and West Philadelphia, are areas in the Philadelphia region that have significant Korean populations

Upper Darby has a humid subtropical climate (Cfa) and the hardiness zone is 7a bordering 7b. Average monthly temperatures in the vicinity of Garrett Road and Lansdowne Avenue range from 32.9 °F in January to 77.7 °F in July. [22]

In 2019, three out members of the LGBTQ community were elected to the Upper Darby School Board. [27]

In addition to the public school district, Upper Darby is home to several parochial and private schools. Monsignor Bonner High School (for boys) and Archbishop Prendergast High School (for girls), both Roman Catholic, are the largest private schools in the Township. Both schools offer grades 9–12 with a combined enrollment close to 5,500 students. In addition to the two high schools, there are nine parochial primary and middle schools located in the Township, with a combined enrollment of 2,867.[ citation needed]

Almost all of the private academic schools in the Township are administered by the Archdiocese of Philadelphia except for the Holy Child Academy, which is a Catholic academy run by the Society of the Holy Child Jesus.

In the Pennsylvania legislature, Upper Darby is represented by Democrat Gina Curry in the 164th District and Democrat Mike Zabel is in the 163rd House District.

In local politics, Democrats hold an 8-3 majority of the town council seats as well as the mayor's office, and all nine seats on the school board are held by Democrats.

Soji Zen Center is a Buddhist Temple in the Drexel Hill section of Upper Darby.

Masjid Al-Madinah Islamic Center is a mosque and cultural center located on 69th Street. Masjid Omar and AL-Quran Center are in the Stonehurst and Bywood neighborhoods. 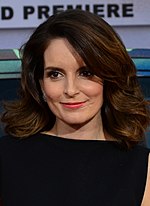