The United States officially recognized the independence of Ukraine on December 25, 1991. The United States upgraded its consulate in the capital, Kyiv, to embassy status on January 21, 1992. [1] In 2002, relations between the United States and Ukraine deteriorated after one of the recordings made during the Cassette Scandal revealed an alleged transfer of a sophisticated Ukrainian defense system to Saddam Hussein's Iraq. Following the 2014 annexation of Crimea by the Russian Federation, the USA became one of the largest defense partners of Ukraine. [2]

According to documents uncovered during the United States diplomatic cables leak, American diplomats defend Ukrainian sovereignty in meetings with other diplomats. [6] [7] [8]

In the wake of Russia's annexation of Crimea, the United States began to supply military aid to Ukraine. [11] This continued after the 2022 Russian invasion of Ukraine with the US massively increasing its supply of military aid, [12] with US President Joe Biden heavily condemning the invasion and pledging support to Ukraine. [13] 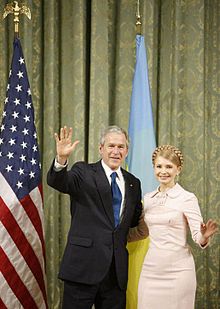 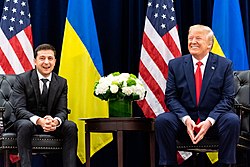 The United States enjoys cordially friendly and strategic relations with Ukraine and attaches great importance to the success of Ukraine's transition to a democracy with a flourishing market economy.[ citation needed] Following a period of economic decline characterized by high inflation and a continued reliance on state controls, the Ukrainian government began taking steps in the fall of 1999 to reinvigorate economic reform that had been stalled for years due to a lack of a reform majority in the Ukrainian parliament. The Ukrainian government's stated determination to implement comprehensive economic reform is a welcome development in the eyes of the US government, and the U.S. is committed to supporting Ukraine in continuing on this path. Bilateral relations suffered a setback in September 2002 when the federal government of the U.S. announced it had authenticated a recording of President Leonid Kuchma's July 2000 decision to transfer a Kolchuga early warning system to Iraq. The Government of Ukraine denied that the transfer had occurred. Ukraine's democratic Orange Revolution has led to closer cooperation and more open dialogue between Ukraine and the United States. U.S. policy remains centered on realizing and strengthening a democratic, prosperous, a primary recipient of FSA assistance. Total U.S. assistance since independence has been more than $3 billion. U.S. assistance to Ukraine is targeted to promote political and economic reform and to address urgent humanitarian needs. The U.S. has consistently encouraged Ukraine's transition to a democratic society with a prosperous market-based economy.

In November 2006, the Millennium Challenge Corporation (MCC) selected Ukraine to be eligible to apply for compact assistance. Ukraine already participates in the MCC Threshold Program, and in December 2006 signed a $45 million Threshold Program agreement. This program, which began implementation in early 2007, aims to reduce corruption in the public sector through civil society monitoring and advocacy, judicial reform, increased government monitoring and enforcement of ethical and administrative standards, streamlining and enforcing regulations, and combating corruption in higher education. Ukraine is beginning the process of developing a Compact proposal, and successful implementation of the Threshold Program will be necessary before the MCC will enter into a Compact with Ukraine.

In January 2022, the U.S. put 5,000ŌĆō8,500 troops on high alert as tensions escalated in the Russo-Ukrainian War, [15] expressing willingness to further help defend Ukraine before and when Russia launched its invasion a month later. [16] [17] The United States provided nearly $1 billion in military aid to Ukraine in 2021 and 2022, up to the first week of the invasion. [11] Such aid included offensive weapons and sharing intelligence with the Ukrainian military. [12] [18] [19] Ukrainian President Volodymyr Zelenskyy has repeatedly sent thanks to American leaders for the support. [20] [21]

In May 2022, the U.S. Senate confirmed Bridget Brink to serve as ambassador to coincide with the reopening of the US embassy in Kyiv after it had closed due to the invasion. [3]

During the Ukrainian independence movement, on August 1, 1991, then-U.S.-President George H. W. Bush made a speech critical of the movement which James Carafano subsequently described as "what may have been the worst speech ever by an American chief executive". [23]

On 18 February 2009 the Verkhovna Rada of Crimea sent a letter to the Cabinet of Ministers of Ukraine and the President of Ukraine in which it stated that it deemed it inexpedient to open a representative office of the United States in Crimea and it urged the Ukrainian leadership to give up this idea. The letter will also be sent[ when?] to the Chairman of the UN General Assembly. The letter was passed in a 77 to 9 roll-call vote with one abstention. [24]

In 2012 the United States Senate Committee on Foreign Relations passed Resolution 466, calling for the unconditional release of political prisoner Yulia Tymoshenko and implemented a visa ban against those responsible. [25] The resolution condemned the administration of Ukrainian President Viktor Yanukovych (in office: 2010ŌĆō2014) and asked NATO to suspend all cooperative agreements with Ukraine. [26] In response, First Deputy General Prosecutor of Ukraine Renat Kuzmin wrote a letter to U.S. President Barack Obama, complaining that his visa was revoked. [27]

The Euromaidan protests resulted in the election of the pro-EU president Petro Poroshenko and then the Annexation of Crimea by the Russian Federation in 2014. Poroshenko requested military aid from the United States. President Barack Obama was reluctant to arm a relatively corrupt military that was recently used against anti-democracy protestors, and saw the mistaken shoot-down of Malaysia Airlines Flight 17 by Russian-armed separatists as an example of the dangers of supplying arms to Ukraine. [11] Though the U.S. had sanctioned Russia and refused to recognize the annexation, after a year Obama declined to provide the requested lethal aid (such as FGM-148 Javelin anti-tank missiles and F-16 fighter jets. [11] The Obama administration did supply $600 million of non-lethal military aid from 2014 to 2016, including vehicles, training, body armor, and night-vision goggles. [11]

In 2017, President Donald Trump approved $47 million of Javelin anti-tank missile and missile launchers; these were not allowed to be deployed but kept in storage as a strategic deterrent against Russian invasion. [11]

In 2018 the U.S. House of Representatives passed a provision blocking any training of Azov Battalion of the Ukrainian National Guard by American forces, citing its neo-Nazi background. In previous years, between 2014 and 2017, the U.S. House of Representatives passed amendments banning support of Azov, but due to pressure from the Pentagon, the amendments were quietly lifted. [28] [29] [30]

On April 25, 2018, 57 members of the House of Representatives, led by Ro Khanna, [31] released a condemnation of Holocaust distortion in Ukraine. [32] They criticized Ukraine's 2015 memory laws glorifying Ukrainian Insurgent Army (UPA) and its leaders, such as Roman Shukhevych. [33] The condemnation came in an open bipartisan letter to Deputy Secretary of State John Sullivan. [34]

In summer 2019, Trump froze $400 million in military aid to Ukraine which had been approved by Congress, [11] an aid package which was the subject of a phone conversation that Trump had with Ukrainian President Volodymyr Zelenskyy on July 25. On August 12, 2019, an anonymous whistleblower submitted a complaint to U.S. Inspector General Michael Atkinson that stated that Trump had allegedly attempted to pressure Zelenskyy into launching an investigation on former U.S. Vice President Joe Biden and his son, Hunter, during the phone call. [35] On September 24, 2019, the United States House of Representatives initiated an impeachment inquiry against Trump. [36] Trump held a meeting with Zelenskyy in New York City on September 25 where both presidents stated that Zelenskyy had not been pressured during the July phone call and that nothing out of the ordinary had occurred. [37] Trump was impeached by the House, but later acquitted in the Senate trial and continued as President until the end of his term.