Ujung Kulon National Park is at the westernmost tip of Java, in Banten province of Indonesia. It includes the volcanic island group of Krakatoa in Lampung province, and other islands including Panaitan, as well as smaller offshore islets such as Handeuleum and Peucang in the Sunda Strait.

The park encompasses an area of 1,206 km2 (466 sq mi) (of which 443 km2 (171 sq mi) is marine), most of which lies on a peninsula reaching into the Indian Ocean. The explosion of nearby Krakatau in 1883 produced a tsunami (giant wave) that eliminated the villages and crops of the coastal areas on the western peninsula, and covered the entire area in a layer of ash averaging 30 cm (12 in) thick.[ citation needed] This caused the total evacuation of the peninsula by humans, thereby allowing it to become a repository for much of Java’s flora and fauna, and most of the remaining lowland forest on the island.[ citation needed]

It is Indonesia's first proposed national park and was declared a UNESCO World Heritage Site in 1991 for containing the largest remaining lowland rainforest in Java. The 1883 eruption of Krakatoa and its tsunami wiped out many settlements in the later park area, and they were never repopulated. [2]

Ujung Kulon is the last known refuge for the critically endangered Javan rhinoceros after poachers killed the last remaining rhino in Cát Tiên National Park of Vietnam, where a small population of 10 or less remained in 2010. In Ujung Kulon the population has been estimated at 40-60 in the 1980s. [4] Within 2001-2010 there have been 14 rhino births identified using camera and video traps. [5] Based on recordings taken between February and October 2011, 35 rhinoceros have been identified, of which 22 were males and 13 females. Of these 7 were old, 18 adults, 5 youngsters, and 5 infant rhinos. [6] Increasing from previous years, in 2013 there were 8 calves which 3 of them were female and 50 teenage and adult which 20 of them were female identified using 120 video cameras functioning at night with motion sensors. It was accurate data, because every rhino has unique morphology as finger print, mainly skin wrinkles around the eyes. [7]

The status of crocodiles within the park is largely unknown; sightings are rare and occur occasionally. There are reports of the false gharial within the park, but these are not confirmed. In addition, the saltwater crocodile was historically present throughout Java's coastal river systems but is currently extirpated in these regions. Small, isolated populations of the saltwater crocodile are reported to exist within Ujung Kulon but confirmation is needed.[ citation needed] 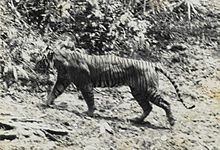 A Javan tiger photographed by Andries Hoogerwerf in 1938

Javan tigers survived in the protected area until the mid-1960s. [9]

The search engine company Google, helped raise the profile of the park and celebrate its 25th anniversary by changing the Google logo to a 'doodle' of two Javan rhinos. The doodle was used in Indonesia on February 26, 2017. [10]