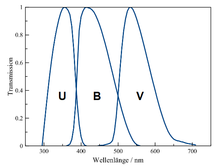 The photometric system called UBV (from Ultraviolet, Blue, Visual), also called the Johnson system (or Johnson-Morgan system), is a wide central band of the electromagnetic spectrum, and usually employed for classifying stars according to their colors. It has been the first known standardized photometric system. The letters U, B, and V stand for ultraviolet, blue, and visual magnitudes, which are measured for a star; two subtractions are then performed in a specific order to classify it in the more technical, formulaic values given by this system. It thereby can focus on the less apparent, when unmodified for viewing, first two groups of these wavelengths to the human eye. This in turn provides maximal contrast with other readings (values) of apparent or (when adjusted for distance) absolute magnitude. [1]

The choice of colors on the blue end of the spectrum was assisted by the bias that photographic film has for those colors. It was introduced in the 1950s by American astronomers Harold Lester Johnson and William Wilson Morgan. A 13 in (330 mm) telescope and the 82 in (2,100 mm) telescope at McDonald Observatory were used to define the system. [1] [2]

The filters are selected so that the mean wavelengths of response functions (at which magnitudes are measured to mean precision) are 364 nm for U, 442 nm for B, 540 nm for V. Zero points were calibrated in the B−V (B minus V) and U−B (U minus B) color indices selecting such A0 main sequence stars which are not affected by interstellar reddening, to be the benchmark bearing a 0 value. [1] These stars are hot for their modest mass, with a mean effective temperature (Teff (K)) of between 9727 and 9790 Kelvin, the latter being of class A0 [a]V (V meaning five). [b]

The system has a key limit drawback. The short wavelength cutoff that is the shortest limit of the U filter is set by any given terrestrial atmosphere rather than the filter itself; thus, it (and observed magnitudes) varies chiefly with altitude and atmospheric water (humidity plus condensation into clouds). [3] However, many measurements have been made in this system, including thousands of the bright stars. [4]

Use for asteroid classification