In classical mechanics, the two-body problem is to predict the motion of two massive objects which are abstractly viewed as point particles. The problem assumes that the two objects interact only with one another; the only force affecting each object arises from the other one, and all other objects are ignored.

The most prominent case of the classical two-body problem is the gravitational case (see also Kepler problem), arising in astronomy for predicting the orbits (or escapes from orbit) of objects such as satellites, planets, and stars. A two-point-particle model of such a system nearly always describes its behavior well enough to provide useful insights and predictions.

A simpler "one body" model, the " central-force problem", treats one object as the immobile source of a force acting on the other. One then seeks to predict the motion of the single remaining mobile object. Such an approximation can give useful results when one object is much more massive than the other (as with a light planet orbiting a heavy star, where the star can be treated as essentially stationary).

However, the one-body approximation is usually unnecessary except as a stepping stone. For many forces, including gravitational ones, the general version of the two-body problem can be reduced to a pair of one-body problems, allowing it to be solved completely, and giving a solution simple enough to be used effectively.

By contrast, the three-body problem (and, more generally, the n-body problem for n ≥ 3) cannot be solved in terms of first integrals, except in special cases.

Gravitation and other inverse-square examples

For the derivation of the solutions to the problem, see Classical central-force problem or Kepler problem.

In principle, the same solutions apply to macroscopic problems involving objects interacting not only through gravity, but through any other attractive scalar force field obeying an inverse-square law, with electrostatic attraction being the obvious physical example. In practice, such problems rarely arise. Except perhaps in experimental apparatus or other specialized equipment, we rarely encounter electrostatically interacting objects which are moving fast enough, and in such a direction, as to avoid colliding, and/or which are isolated enough from their surroundings.

The dynamical system of a two-body system under the influence of torque turns out to be a Sturm-Liouville equation. [1]

Inapplicability to atoms and subatomic particles

Although the two-body model treats the objects as point particles, classical mechanics only apply to systems of macroscopic scale. Most behavior of subatomic particles cannot be predicted under the classical assumptions underlying this article or using the mathematics here.

Electrons in an atom are sometimes described as "orbiting" its nucleus, following an early conjecture of Niels Bohr (this is the source of the term " orbital"). However, electrons don't actually orbit nuclei in any meaningful sense, and quantum mechanics are necessary for any useful understanding of the electron's real behavior. Solving the classical two-body problem for an electron orbiting an atomic nucleus is misleading and does not produce many useful insights. 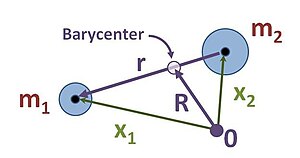 When applied to the two masses, Newton's second law states that

Adding and subtracting these two equations decouples them into two one-body problems, which can be solved independently. Adding equations (1) and ( 2) results in an equation describing the center of mass ( barycenter) motion. By contrast, subtracting equation (2) from equation (1) results in an equation that describes how the vector r = x1 − x2 between the masses changes with time. The solutions of these independent one-body problems can be combined to obtain the solutions for the trajectories x1(t) and x2(t).

be the position of the center of mass ( barycenter) of the system. Addition of the force equations (1) and (2) yields

shows that the velocity

Dividing both force equations by the respective masses, subtracting the second equation from the first, and rearranging gives the equation

where we have again used Newton's third law F12 = −F21 and where r is the displacement vector from mass 2 to mass 1, as defined above.

The force between the two objects, which originates in the two objects, should only be a function of their separation r and not of their absolute positions x1 and x2; otherwise, there would not be translational symmetry, and the laws of physics would have to change from place to place. The subtracted equation can therefore be written:

is the reduced mass

Solving the equation for r(t) is the key to the two-body problem. The solution depends on the specific force between the bodies, which is defined by

. For the case where

Once R(t) and r(t) have been determined, the original trajectories may be obtained

as may be verified by substituting the definitions of R and r into the right-hand sides of these two equations.

The motion of two bodies with respect to each other always lies in a plane (in the center of mass frame).

Proof: Defining the linear momentum p and the angular momentum L of the system, with respect to the center of mass, by the equations

where μ is the reduced mass and r is the relative position r2 − r1 (with these written taking the center of mass as the origin, and thus both parallel to r) the rate of change of the angular momentum L equals the net torque N

and using the property of the vector cross product that v × w = 0 for any vectors v and w pointing in the same direction,

Introducing the assumption (true of most physical forces, as they obey Newton's strong third law of motion) that the force between two particles acts along the line between their positions, it follows that r × F = 0 and the angular momentum vector L is constant (conserved). Therefore, the displacement vector r and its velocity v are always in the plane perpendicular to the constant vector L.

Energy of the two-body system

If the force F(r) is conservative then the system has a potential energy U(r), so the total energy can be written as

The coordinates x1 and x2 can be expressed as

and in a similar way the energy E is related to the energies E1 and E2 that separately contain the kinetic energy of each body:

For many physical problems, the force F(r) is a central force, i.e., it is of the form

where F(r) is negative in the case of an attractive force.