From Wikipedia
https://en.wikipedia.org/wiki/Triangular_tiling
Regular tiling of the plane

In geometry, the triangular tiling or triangular tessellation is one of the three regular tilings of the Euclidean plane, and is the only such tiling where the constituent shapes are not parallelogons. Because the internal angle of the equilateral triangle is 60 degrees, six triangles at a point occupy a full 360 degrees. The triangular tiling has Schläfli symbol of {3,6}.

English mathematician John Conway called it a deltille, named from the triangular shape of the Greek letter delta (Δ). The triangular tiling can also be called a kishextille by a kis operation that adds a center point and triangles to replace the faces of a hextille.

It is one of three regular tilings of the plane. The other two are the square tiling and the hexagonal tiling. 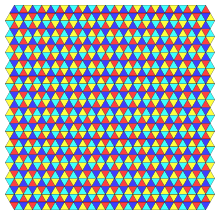 A 2-uniform triangular tiling, 4 colored triangles, related to the geodesic polyhedron as {3,6+}2,0.

There is one class of Archimedean colorings, 111112, (marked with a *) which is not 1-uniform, containing alternate rows of triangles where every third is colored. The example shown is 2-uniform, but there are infinitely many such Archimedean colorings that can be created by arbitrary horizontal shifts of the rows.

A2 lattice and circle packings 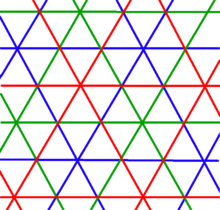 The A*
2 lattice as three triangular tilings:

The vertex arrangement of the triangular tiling is called an A2 lattice. [2] It is the 2-dimensional case of a simplectic honeycomb.

The A*
2 lattice (also called A3
2) can be constructed by the union of all three A2 lattices, and equivalent to the A2 lattice.

The vertices of the triangular tiling are the centers of the densest possible circle packing. [3] Every circle is in contact with 6 other circles in the packing ( kissing number). The packing density is π⁄√12 or 90.69%. The voronoi cell of a triangular tiling is a hexagon, and so the voronoi tessellation, the hexagonal tiling, has a direct correspondence to the circle packings. 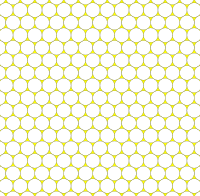 Triangular tilings can be made with the equivalent {3,6} topology as the regular tiling (6 triangles around every vertex). With identical faces ( face-transitivity) and vertex-transitivity, there are 5 variations. Symmetry given assumes all faces are the same color. [4]

This tiling is topologically related as a part of sequence of regular polyhedra with Schläfli symbols {3,n}, continuing into the hyperbolic plane.

It is also topologically related as a part of sequence of Catalan solids with face configuration Vn.6.6, and also continuing into the hyperbolic plane.

Like the uniform polyhedra there are eight uniform tilings that can be based from the regular hexagonal tiling (or the dual triangular tiling).

The first is made of 2-edges, and next two are triangular edges, and the last has overlapping hexagonal edges.

There are also three Laves tilings made of single type of triangles: