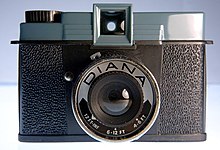 The original Diana camera was made in Hong Kong in the 1960s and 1970s. The Diana+ and Diana F+ copies are currently produced by Lomography. 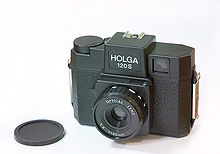 A photograph taken with a Holga. 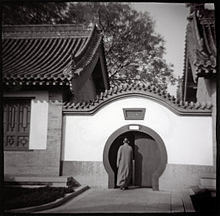 A photograph (Da Ci'en Temple, Xi'an, China) taken with an original Diana camera. Evident is the typical vignetting and blurring inherent in a Diana image.

A toy camera is a simple, inexpensive film camera.

Despite the name, toy cameras are fully functional and capable of taking photographs, though with optical aberrations due to the limitations of the simple lenses. From the 1990s onward, there has been interest in the artistic use of such cameras, both those designed for children such as the Diana, and others originally intended as mass-market consumer cameras, such as the Lomo LC-A, Lubitel, and Holga.

Many professional photographers have used toy cameras and exploited the vignetting, blur, light leaks, and other distortions of their inexpensive lenses for artistic effect to take award-winning pictures. [1] Toy camera photography has been widely exhibited at many popular art shows, such as the annual "Krappy Kamera" show at the Soho Photo Gallery in the Tribeca neighborhood of New York City. Various publications such as Popular Photography magazine have extolled the virtues of the Diana camera in its own right as an "art" producing image maker. Several books have also featured the work of toy cameras, such as The Friends of Photography's The Diana Show, Iowa by Nancy Rexroth, and Angels at the Arno by Eric Lindbloom.

The original Lomo LC-A, which inspired the movement

While cheap plastic toy cameras using film were and are produced by multiple manufacturers, Lomography is named after the Soviet-era cameras produced by the​ Leningradskoye Optiko-Mekhanicheskoye Obyedinenie.

Lomography has been a highly social pursuit, with local clubs organised by The Lomographic Society International ( Lomographische AG, a commercial company selling lomo cameras). [3] The company promotes the genre; however, it is not necessary to use the company's products to take lomographic photos. [4]

"Lomography" is claimed as a commercial trademark by Lomographische AG, associated with a photographic image style and a film camera movement and community facilitated by The Lomographic Society International. However, it has become a genericised trademark; most[ citation needed] camera phone photo editor apps include a "lomo" filter. [4]

The Lomography name is inspired by the formerly state-run optics manufacturer, LOMO PLC of Saint Petersburg, Russia that created and produced the 35 mm LOMO LC-A Compact Automat camera, now central to Lomography. This camera was loosely based upon the Cosina CX-1 introduced in the early 1980s. [5] The LOMO LC-A produces "unique, colourful, and sometimes blurry" images. [6]

Sample shot from a LOMO LC-A

The Lomographic Society International was founded in 1992 by a group of Viennese students interested in the LC-A, a camera created by LOMO PLC of Saint Petersburg, Russia. [7] [8] [9] Lomography started as an art movement through which the students put on exhibitions of photos; the art movement then developed into the Lomographische AG, a commercial enterprise.

Lomographische AG is a commercial company headquartered in Vienna, Austria, which sells cameras, accessories, and film. [3]

Lomographische AG signed an exclusive distribution agreement with LOMO PLC in 1995 — becoming the sole distributor of all LOMO LC-A cameras outside of the former Soviet Union. [10] The new company reached an agreement with the deputy mayor of St Petersburg, the future Russian Prime Minister and President, Vladimir Putin, to receive a tax break in order to keep the LOMO factory in the city open. [3]

The Lomographic Society International (Lomographische AG) has moved into producing their own range of analog cameras, films and accessories. Lomographische AG has also released products catered to digital devices, such as the Smartphone Film Scanner; [13] and the Achromat lens collection [14] for SLR cameras with Canon EF, Nikon F or Pentax K mounts, inspired by 19th century Daguerreotype photography. In 2013, together with Zenit, Lomographische AG produced a new version of the Petzval Lens designed to work with Canon EF and Nikon F mount SLR cameras. 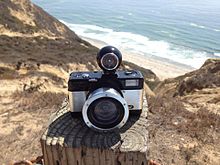 Cameras that have been marketed by Lomographische AG: