From Wikipedia
(Redirected from Tournament graph)
https://en.wikipedia.org/wiki/Tournament_graph
Directed graph where each vertex pair has one arc

Many of the important properties of tournaments were first investigated by H. G. Landau in Landau (1953) to model dominance relations in flocks of chickens. Current applications of tournaments include the study of voting theory and social choice theory among other things.

The name tournament originates from such a graph's interpretation as the outcome of a round-robin tournament in which every player encounters every other player exactly once, and in which no draws occur. In the tournament digraph, the vertices correspond to the players. The edge between each pair of players is oriented from the winner to the loser. If player

, then it is said that

. If every player beats the same number of other players (indegree = outdegree), the tournament is called regular.

Theorem —  Any tournament on a finite number

of vertices contains a Hamiltonian path, i.e., directed path on all 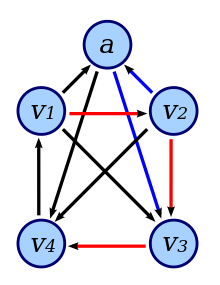 a is inserted between v2 and v3.

This is easily shown by induction on

: suppose that the statement holds for

, and consider any tournament

and consider a directed path

. (One possibility is to let

be maximal such that for every

be minimal such that

is a directed path as desired. This argument also gives an algorithm for finding the Hamiltonian path. More efficient algorithms, that require examining only

of the edges, are known. The Hamiltonian paths are in one-to-one correspondence with the minimal feedback arc sets of the tournament. [1] Rédei's theorem is the special case for complete graphs of the Gallai–Hasse–Roy–Vitaver theorem, relating the lengths of paths in orientations of graphs to the chromatic number of these graphs. [2]

in the range from three to the number of vertices in the tournament, there is a cycle of length

-strongly connected if for every set 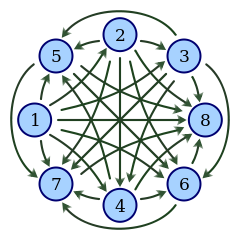 A transitive tournament on 8 vertices.

A tournament in which

The following statements are equivalent for a tournament

Transitive tournaments play a role in Ramsey theory analogous to that of cliques in undirected graphs. In particular, every tournament on

vertices contains a transitive subtournament on

vertices. [7] The proof is simple: choose any one vertex

to be part of this subtournament, and form the rest of the subtournament recursively on either the set of incoming neighbors of

or the set of outgoing neighbors of

Erdős & Moser (1964) proved that there are tournaments on

vertices without a transitive subtournament of size

Their proof uses a counting argument: the number of ways that a

, this number is too small to allow for an occurrence of a transitive tournament within each of the

different tournaments on the same set of

A player who wins all games would naturally be the tournament's winner. However, as the existence of non-transitive tournaments shows, there may not be such a player. A tournament for which every player loses at least one game is called a 1-paradoxical tournament. More generally, a tournament

-paradoxical if for every

there is a vertex

. By means of the probabilistic method, Paul Erdős showed that for any fixed value of

, then almost every tournament on

-paradoxical. [8] On the other hand, an easy argument shows that any

-paradoxical tournament must have at least

players, which was improved to

by Esther and George Szekeres (1965). [9] There is an explicit construction of

players by Graham and Spencer (1971) namely the Paley tournament.

The condensation of any tournament is itself a transitive tournament. Thus, even for tournaments that are not transitive, the strongly connected components of the tournament may be totally ordered. [10]

is a score sequence if and only if :

be the number of different score sequences of size

Winston and Kleitman proved that for sufficiently large n:

Takács later showed, using some reasonable but unproven assumptions, that

Together these provide evidence that:

Yao showed that every nonempty set of nonnegative integers is the score set for some tournament.

be a finite set of alternatives, and consider a list

of linear orders over

. We interpret each order

as the preference ranking of a voter

is then defined so that

if and only if a majority of the voters prefer

of voters is odd, then the majority relation forms the dominance relation of a tournament on vertex set

By a lemma of McGarvey, every tournament on

vertices can be obtained as the majority relation of at most

voters. [11] [12] Results by Stearns and Erdős & Moser later established that

voters are needed to induce every tournament on

Laslier (1997) studies in what sense a set of vertices can be called the set of "winners" of a tournament. This revealed to be useful in Political Science to study, in formal models of political economy, what can be the outcome of a democratic process. [14]

This article incorporates material from tournament on PlanetMath, which is licensed under the Creative Commons Attribution/Share-Alike License.