The Toronto International Film Festival (TIFF, often stylized as tiff) is one of the largest publicly attended film festivals in the world, attracting over 480,000 people annually. Since its founding in 1976, TIFF has grown to become a permanent destination for film culture operating out of the TIFF Bell Lightbox, located in Downtown Toronto. TIFF's mission is "to transform the way people see the world through film". [2]

Year-round, the TIFF Bell Lightbox offers screenings, lectures, discussions, festivals, workshops, industry support, and the chance to meet filmmakers from Canada and around the world. TIFF Bell Lightbox is located on the north west corner of King Street and John Street in downtown Toronto.

Bell Lightbox is the cultural centrepiece and home to TIFF programming outside festival dates.

In 2016, 397 films from 83 countries were screened at 28 screens in downtown Toronto venues, welcoming an estimated 480,000 attendees, over 5,000 of whom were industry professionals. [3] TIFF starts the Thursday night after Labour Day (the first Monday in September in Canada) and lasts for eleven days.

Founded in 1976, TIFF is now one of the largest and most prestigious events of its kind in the world. [4] In 1998, Variety acknowledged that TIFF "is second only to Cannes in terms of high-profile pics, stars, and market activity". In 2007, Time noted that TIFF had "grown from its place as the most influential fall film festival to the most influential film festival, period". [5] This is partially the result of the festival's ability and reputation for generating " Oscar buzz". [6]

The Toronto International Film Festival was first launched as the Toronto Festival of Festivals, collecting the best films from other film festivals around the world and showing them to eager audiences in Toronto. Founded by Bill Marshall, Dusty Cohl, and Henk Van der Kolk, [9] the inaugural event took place from October 18 through 24, 1976. That first year, 35,000 filmgoers watched 127 films from 30 countries presented in ten programmes. Piers Handling has been the festival's director and CEO since 1994, while Noah Cowan became co-director of TIFF in 2004. In late 2007, Cowan became the artistic director of TIFF Bell Lightbox, while longtime programmer Cameron Bailey succeeded as co-director. As of 2013, Bailey is now the artistic director of the Toronto International Film Festival, as well as TIFF Bell Lightbox's year round programming. [10]

TIFF was once centred on the Yorkville neighbourhood, but the Toronto Entertainment District later gained a greater level of prominence. [11] [12] TIFF is known for the celebrity buzz it brings to the area with international media setting up near its restaurants and stores for photos and interviews with the stars. In 2010, TIFF opened its permanent headquarters, TIFF Bell Lightbox, a year-round home for the appreciation of film in the heart of downtown Toronto, although TIFF films are still screened at a wider variety of venues, including the Scotiabank Theatre Toronto, rather than exclusively at the Lightbox.

The festival also organizes the TIFF Film Circuit, a program which partners with local organizations in other Canadian towns and cities to present screenings of films that have previously been shown at TIFF. 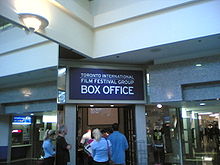 TIFF box office at the Manulife Centre in 2006

The festival was founded in 1976 at the Windsor Arms Hotel by Bill Marshall, Henk Van der Kolk and Dusty Cohl. [13] Beginning as a collection of the best-regarded films from film festivals around the world, it had an inaugural attendance of 35,000. [14] Ironically, however, Hollywood studios withdrew their submissions from TIFF due to concerns that Toronto audiences would be too parochial for their products. [15]

In 1978, the decision was made to replace the name "Festival of Festivals" with "Toronto International Film Festival" as well as a move to a new location for the festival, moving from the Harbour Castle Hotel to the Plaza II, and also a new director, with Wayne Clark replacing Marshall. The number of galas increased from one to two per night and the Canadian Film Awards were incorporated into the festival. [16] From 1994 to 2009, the umbrella organization running TIFF was named "Toronto International Film Festival Group" (TIFFG). In 2009, the umbrella organization TIFFG was renamed to TIFF. [17]

In 2001, Perspective Canada, the programme that had focused on Canadian films since 1984, was replaced by two programmes:

Otherwise, Canadian films are now simply included alongside international films in the other film programs rather than being grouped as a dedicated Canadian film stream.

In 2004, TIFF was featured as the site of murder mystery in the film Jiminy Glick in Lalawood, a comedy film starring Martin Short.

In 2008, Rose McGowan caused controversy at a TIFF press conference for her film Fifty Dead Men Walking, when she noted that "I imagine, had I grown up in Belfast, I would 100% have been in the IRA". [20]

In 2019, it was reported that due to a request from its owner, Cineplex Entertainment, no TIFF films distributed by subscription video-on-demand services (specifically Amazon Video and Netflix) are being screened at Scotiabank Theatre—which has been considered the "primary" venue of the festival. [28]

The 2020 version announced that it would be both in-person and virtual due to the COVID-19 pandemic, and that film screening would be "masks optional". It was criticized for creating a potential superspreader event as the social nature of the festival could increase the risk for COVID-19 transmission. [29] The festival reversed the decision within 24 hours citing a surge of new cases in Ontario. [30] 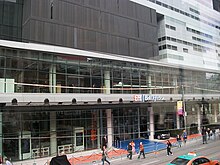 In 2007, the Festival Group began construction on TIFF Bell Lightbox, a new facility at the corner of King and John Streets in downtown Toronto, on land donated by Ivan Reitman and family. The $181 million facility is named for founding sponsor Bell Canada, with additional support from the Government of Ontario and Government of Canada.

In 2010, the organization opened its new headquarters at TIFF Bell Lightbox. The facility, designed by local firm KPMB Architects, provides extensive year-round galleries, cinemas, archives and activities for cinephiles. [35] The five-storey facility contains five cinemas, two gallery spaces, film archives and an extensive reference library, study spaces, film lab facility, and a research centre. There is also a gift shop, two restaurants, a lounge, a cafe, and a three-storey atrium. [36] Cooperatively with Daniels Corporation, there is a 46-storey condominium atop, called the Festival Tower.

The first film screening was Bruce McDonald's Trigger. The first exhibition was a retrospective on Tim Burton, organized by the Museum of Modern Art (New York City). Subsequent exhibitions include Fellini: Spectacular Obsessions, Grace Kelly: From Movie Star to Princess, Designing 007: 50 Years of Bond Style, and Stanley Kubrick: The Exhibition, all of which were organized by TIFF, as well as one called Essential Cinema, featuring posters, images and props from TIFF's The Essential 100 list of films. [37] [38]

The Film Reference Library (FRL) is a large Canadian film research collection. The library is a free resource for film lovers, filmmakers, students, scholars, and journalists, and is located on the fourth floor of the TIFF Bell Lightbox. An affiliate member of the International Federation of Film Archives (FIAF), the FRL promotes Canadian and global film scholarship by collecting, preserving, and providing access to a comprehensive collection of film prints, and film-related reference resources (including books, periodicals, scripts, research files, movies, press kits, and about 80 special collections.

In 2016, the festival received a donation of 1,400 film prints, and launched a campaign to raise money for the preservation and storage of the films. [39]

Each year, TIFF releases a Canada's Top Ten list of the films selected by a poll of festival programmers across Canada as the ten best Canadian feature and short films of the year, regardless of whether or not they were screened at TIFF. [40] The films selected are announced in December each year.

Previously, the winning films were screened at a smaller follow-up "Canada's Top Ten" festival at the Lightbox the following January, with a People's Choice Award then presented for that minifestival. [40] In 2018, TIFF announced a change, under which instead of a dedicated festival, each Top Ten film will receive its own standalone theatrical run at the Lightbox throughout the year. [41]

Since 1984, every decade TIFF has also produced a Top 10 Canadian Films of All Time list. This list is produced from a wider poll of film industry professionals and academics throughout Canada, separately from the annual top-ten list.

In 2015, the festival introduced Platform, a juried programme that champions director's cinema from around the world; one film from the stream is selected as the winner of the Platform Prize.

For all of the juried awards, honorable mentions may also be given, although the juries are expected to select one overall winner.

For 2019, TIFF announced two new awards, the TIFF Impact Award to honour production companies for work that has had an impact on the film industry, and the Mary Pickford Award to honour an emerging female filmmaker. [47] In the same year the festival introduced the TIFF Tribute Awards, a gala ceremony at which distinguished actors and filmmakers are honoured for their lifetime career achievements; unlike most award categories, the Tribute Award honorees are named in advance of the festival. [48]

The hundreds of films screened at the annual festival are divided into sections (referred to by TIFF as "Programmes") based on genre (e.g. documentary, children's films), format (e.g. short films, television episodes), the status of filmmaker (e.g. "masters", first-time directors), and so forth. Up until the early 2010s there were sections reserved for Canadian films, but beginning in 2015 all Canadian films are integrated in sections with films from outside Canada.

Currently the festival's 14 sections are as follows: [26]

In 2016, TIFF hosted 1,800 members of the press and print media outlets such as the Toronto Star, The Globe and Mail, The New York Times, The Times of India, Los Angeles Times, The Philadelphia Inquirer, Miami Herald, and the Toronto Sun have published a significant amount of festival coverage. [52] [53] Also, the major industry trade magazines Variety, The Hollywood Reporter and Screen International all produce daily editions during TIFF. TIFF reports also appear in weekly news magazines; American, Canadian and international entertainment shows; news services; and a wide range of film and celebrity blogs. [54]