From Wikipedia, the free encyclopedia
Tool for gripping
This article is about the tool. For the secret society, see Tong (organization). 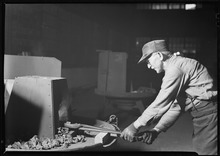 Tongs are a type of tool used to grip and lift objects instead of holding them directly with hands. There are many forms of tongs adapted to their specific use.

The first pair of tongs belongs to the Egyptians. Tongs likely started off as basic wooden tongs and then over time progressed to bronze bars as early as 3000BC. Over time they progressed to what we now know as modern-day tongs.

An Egyptian wall painting from 1450 BCE shows a crucible supported between two metal bars. The same painting shows someone holding a small object over a fire with a tong-like instrument. Bronze loops capable of handling heavy crucibles also happened to appear at this time. [1]

Design variations include resting points so that the working end of the tongs does not come into contact with a bench surface. [3] 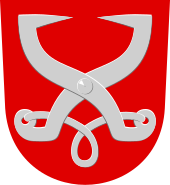 A logging tongs in the coat of arms of Konnevesi