From Wikipedia
https://en.wikipedia.org/wiki/Timeline_of_rocket_and_missile_technology
See also: Timeline of the gunpowder age 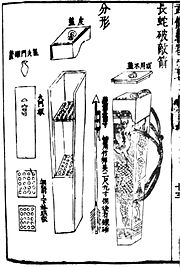 A depiction of the "long serpent" rocket launcher from the 11th century book Wujing Zongyao. The holes in the frame are designed to keep the fire arrows separate.

This article gives a concise timeline of rocket and missile technology.