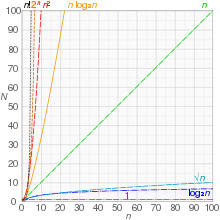 Graphs of functions commonly used in the analysis of algorithms, showing the number of operations N as the result of input size n for each function

Since an algorithm's running time may vary among different inputs of the same size, one commonly considers the worst-case time complexity, which is the maximum amount of time required for inputs of a given size. Less common, and usually specified explicitly, is the average-case complexity, which is the average of the time taken on inputs of a given size (this makes sense because there are only a finite number of possible inputs of a given size). In both cases, the time complexity is generally expressed as a function of the size of the input. [1]: 226  Since this function is generally difficult to compute exactly, and the running time for small inputs is usually not consequential, one commonly focuses on the behavior of the complexity when the input size increases—that is, the asymptotic behavior of the complexity. Therefore, the time complexity is commonly expressed using big O notation, typically

, etc., where n is the size in units of bits needed to represent the input.

Algorithmic complexities are classified according to the type of function appearing in the big O notation. For example, an algorithm with time complexity

is a linear time algorithm and an algorithm with time complexity

is a polynomial time algorithm.

The following table summarizes some classes of commonly encountered time complexities. In the table, poly(x) = xO(1), i.e., polynomial in x.

An algorithm is said to be constant time (also written as

time) if the value of

time. If the number of elements is known in advance and does not change, however, such an algorithm can still be said to run in constant time.

. However, there is some constant t such that the time required is always at most t.

Here are some examples of code fragments that run in constant time:

, where a is any constant value, this is equivalent to and stated in standard notation as

An algorithm is said to take logarithmic time when

are related by a constant multiplier, and such a multiplier is irrelevant to big O classification, the standard usage for logarithmic-time algorithms is

regardless of the base of the logarithm appearing in the expression of T.

algorithm is considered highly efficient, as the ratio of the number of operations to the size of the input decreases and tends to zero when n increases. An algorithm that must access all elements of its input cannot take logarithmic time, as the time taken for reading an input of size n is of the order of n.

An example of logarithmic time is given by dictionary search. Consider a dictionary D which contains n entries, sorted by alphabetical order. We suppose that, for

, one may access the kth entry of the dictionary in a constant time. Let

denote this kth entry. Under these hypotheses, the test to see if a word w is in the dictionary may be done in logarithmic time: consider

denotes the floor function. If

for some constant k. Another way to write this is

For example, matrix chain ordering can be solved in polylogarithmic time on a parallel random-access machine, [6] and a graph can be determined to be planar in a fully dynamic way in

. In particular this includes algorithms with the time complexities defined above.

Typical algorithms that are exact and yet run in sub-linear time use parallel processing (as the NC1 matrix determinant calculation does), or alternatively have guaranteed assumptions on the input structure (as the logarithmic time binary search and many tree maintenance algorithms do). However, formal languages such as the set of all strings that have a 1-bit in the position indicated by the first

bits of the string may depend on every bit of the input and yet be computable in sub-linear time.

The specific term sublinear time algorithm is usually reserved to algorithms that are unlike the above in that they are run over classical serial machine models and are not allowed prior assumptions on the input. [8] They are however allowed to be randomized, and indeed must be randomized for all but the most trivial of tasks.

As such an algorithm must provide an answer without reading the entire input, its particulars heavily depend on the access allowed to the input. Usually for an input that is represented as a binary string

it is assumed that the algorithm can in time

request and obtain the value of

An algorithm is said to take linear time, or

time, if its time complexity is

for every input of size n. For example, a procedure that adds up all elements of a list requires time proportional to the length of the list, if the adding time is constant, or, at least, bounded by a constant.

Linear time is the best possible time complexity in situations where the algorithm has to sequentially read its entire input. Therefore, much research has been invested into discovering algorithms exhibiting linear time or, at least, nearly linear time. This research includes both software and hardware methods. There are several hardware technologies which exploit parallelism to provide this. An example is content-addressable memory. This concept of linear time is used in string matching algorithms such as the Boyer–Moore algorithm and Ukkonen's algorithm.

for some positive constant k; [9] linearithmic time is the case

Algorithms which run in quasilinear time include:

In many cases, the

running time is simply the result of performing a

operation n times (for the notation, see Big O notation § Family of Bachmann–Landau notations). For example, binary tree sort creates a binary tree by inserting each element of the n-sized array one by one. Since the insert operation on a self-balancing binary search tree takes

comparisons in the worst case because

, by Stirling's approximation. They also frequently arise from the recurrence relation

An algorithm is said to be subquadratic time if

For example, simple, comparison-based sorting algorithms are quadratic (e.g. insertion sort), but more advanced algorithms can be found that are subquadratic (e.g. shell sort). No general-purpose sorts run in linear time, but the change from quadratic to sub-quadratic is of great practical importance.

An algorithm is said to be of polynomial time if its running time is upper bounded by a polynomial expression in the size of the input for the algorithm, that is, T(n) = O(nk) for some positive constant k. [1] [11] Problems for which a deterministic polynomial time algorithm exists belong to the complexity class P, which is central in the field of computational complexity theory. Cobham's thesis states that polynomial time is a synonym for "tractable", "feasible", "efficient", or "fast". [12]

Some examples of polynomial time algorithms:

(which takes up space proportional to n in the Turing machine model), it is possible to compute

with n multiplications using repeated squaring. However, the space used to represent

, and thus exponential rather than polynomial in the space used to represent the input. Hence, it is not possible to carry out this computation in polynomial time on a Turing machine, but it is possible to compute it by polynomially many arithmetic operations.

arithmetic operations on numbers with at most

(that is, on their length in bits) and not only on the number of integers in the input.

P is the smallest time-complexity class on a deterministic machine which is robust in terms of machine model changes. (For example, a change from a single-tape Turing machine to a multi-tape machine can lead to a quadratic speedup, but any algorithm that runs in polynomial time under one model also does so on the other.) Any given abstract machine will have a complexity class corresponding to the problems which can be solved in polynomial time on that machine.

An algorithm is defined to take superpolynomial time if T(n) is not bounded above by any polynomial. Using little omega notation, it is ω(nc) time for all constants c, where n is the input parameter, typically the number of bits in the input.

For example, an algorithm that runs for 2n steps on an input of size n requires superpolynomial time (more specifically, exponential time).

An algorithm that uses exponential resources is clearly superpolynomial, but some algorithms are only very weakly superpolynomial. For example, the Adleman–Pomerance–Rumely primality test runs for nO(log log n) time on n-bit inputs; this grows faster than any polynomial for large enough n, but the input size must become impractically large before it cannot be dominated by a polynomial with small degree.

An algorithm that requires superpolynomial time lies outside the complexity class P. Cobham's thesis posits that these algorithms are impractical, and in many cases they are. Since the P versus NP problem is unresolved, it is unknown whether NP-complete problems require superpolynomial time.

we get a polynomial time algorithm, for

we get a sub-linear time algorithm.

(n being the number of vertices), but showing the existence of such a polynomial time algorithm is an open problem.

The complexity class QP consists of all problems that have quasi-polynomial time algorithms. It can be defined in terms of DTIME as follows. [16]

A problem is said to be sub-exponential time solvable if it can be solved in running times whose logarithms grow smaller than any given polynomial. More precisely, a problem is in sub-exponential time if for every ε > 0 there exists an algorithm which solves the problem in time O(2nε). The set of all such problems is the complexity class SUBEXP which can be defined in terms of DTIME as follows. [5] [19] [20] [21]

This notion of sub-exponential is non-uniform in terms of ε in the sense that ε is not part of the input and each ε may have its own algorithm for the problem.

Some authors define sub-exponential time as running times in

, where the length of the input is n. Another example was the graph isomorphism problem, which the best known algorithm from 1982 to 2016 solved in

. However, at STOC 2016 a quasi-polynomial time algorithm was presented. [24]

It makes a difference whether the algorithm is allowed to be sub-exponential in the size of the instance, the number of vertices, or the number of edges. In parameterized complexity, this difference is made explicit by considering pairs

of decision problems and parameters k. SUBEPT is the class of all parameterized problems that run in time sub-exponential in k and polynomial in the input size n: [25]

More precisely, SUBEPT is the class of all parameterized problems

for which there is a computable function

and an algorithm that decides L in time

Sometimes, exponential time is used to refer to algorithms that have T(n) = 2O(n), where the exponent is at most a linear function of n. This gives rise to the complexity class E.

An example of an algorithm that runs in factorial time is bogosort, a notoriously inefficient sorting algorithm based on trial and error. Bogosort sorts a list of n items by repeatedly shuffling the list until it is found to be sorted. In the average case, each pass through the bogosort algorithm will examine one of the n! orderings of the n items. If the items are distinct, only one such ordering is sorted. Bogosort shares patrimony with the infinite monkey theorem.

An algorithm is said to be double exponential time if T(n) is upper bounded by 22poly(n), where poly(n) is some polynomial in n. Such algorithms belong to the complexity class 2-EXPTIME.