From Wikipedia
https://en.wikipedia.org/wiki/Tiling_puzzle
Puzzles involving the assembly of flat shapes 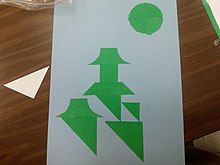 Example of a tiling puzzle that utilizes negative space.

Tiling puzzles may be made from wood, metal, cardboard, plastic or any other sheet-material. Many tiling puzzles are now available as computer games.

Tiling puzzles have a long history. Some of the oldest and most famous are jigsaw puzzles and the tangram puzzle.

Other examples of tiling puzzles include: