The son of William Banks, a surveyor who was land steward to the Duke of Beaufort, he was born in London. He was educated at Ross-on-Wye. Banks was taught drawing by his father, and from 1750 to 1756 was apprenticed to a woodcarver, William Barlow, in London. In his spare time he worked at sculpture, spending his evenings in the studio of the Flemish émigré sculptor Peter Scheemakers. During this period he is known to have worked for the architect William Kent. Before 1772, when he obtained a travelling studentship given by the Royal Academy and proceeded to Rome, he had already exhibited several fine works. [1]

Returning to England in 1779 Banks found that the taste for classical poetry, long the source of his inspiration, no longer existed, and he spent two years in Saint Petersburg, being employed by Catherine the Great, who purchased his Cupid Tormenting a Butterfly. On his return to England he modelled his colossal Achilles Mourning the Loss of Briseis, a work full of force and passion. He was elected, in 1784, an associate of the Royal Academy and in the following year became a full member. [1]

Banks died in London on 2 February 1805. [1] He is buried in the churchyard of St Mary on Paddington Green Church.

A monument to his memory was also erected in Westminster Abbey. [2]

Among other works in St Paul's Cathedral by Banks are the monuments to Captain George Blagden Westcott and Captain Richard Rundle Burges, and in Westminster Abbey to Sir Eyre Coote, General Loten, Sir Clifton Wintringham and William Woollett. His bronze bust of Warren Hastings is in the National Portrait Gallery. [3] 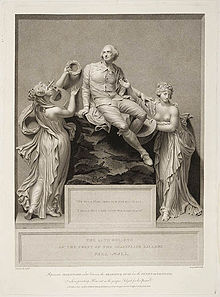 Engraving by Benjamin Smith of Banks's sculpture Shakespeare attended by Painting and Poetry at the entrance to the Boydell Shakespeare Gallery. The sculpture in now in the former garden of Shakespeare's home New Place in Stratford.

Banks's best-known work is perhaps the colossal group of Shakespeare Attended by Painting and Poetry, [4] which since 1871 has been placed in the garden of New Place, Stratford-upon-Avon. [5] The high-relief sculpture was commissioned in 1788 to be placed in a recess in the upper façade of John Boydell's new Shakespeare Gallery in Pall Mall.[ citation needed] Banks was paid 500 guineas for the group which depicts Shakespeare, reclining against a rock, between the Dramatic Muse and the Genius of Painting. [6] Beneath it was panelled pedestal inscribed "He was a Man, take him for all in all, I shall not look upon his like again". [7] The sculpture remained in Pall Mall until the building was demolished in 1868 or 1869, when it was moved to New Place. [8]

One of his most bizarre works is the Anatomical Crucifixion (1801) in the Hunterian Museum in London. This shows a dissected body nailed to a cross. 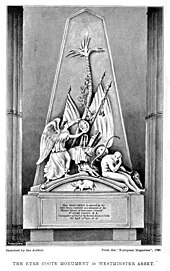