From Wikipedia, the free encyclopedia
Fable by Aesop
This article is about Aesop's fable. For other uses, see The Tortoise and the Hare (disambiguation). 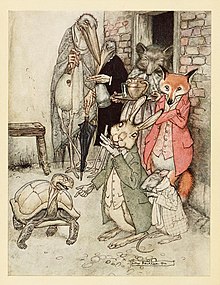 "The Tortoise and the Hare", from an edition of Aesop's Fables illustrated by Arthur Rackham, 1912

"The Tortoise and the Hare" is one of Aesop's Fables and is numbered 226 in the Perry Index. [1] The account of a race between unequal partners has attracted conflicting interpretations. The fable itself is a variant of a common folktale theme in which ingenuity and trickery (rather than doggedness) are employed to overcome a stronger opponent.

The story concerns a Hare who ridicules a slow-moving Tortoise. Tired of the Hare's arrogant behaviour, the Tortoise challenges him to a race. [2] The hare soon leaves the tortoise behind and, confident of winning, takes a nap midway through the race. When the Hare awakes, however, he finds that his competitor, crawling slowly but steadily, has arrived before him. The later version of the story in La Fontaine's Fables (VI.10), while more long-winded, differs hardly at all from Aesop's. [3]

As in several other fables by Aesop, the lesson it is teaching appears ambiguous. In Classical times it was not the Tortoise's plucky conduct in taking on a bully that was emphasised but the Hare's foolish over-confidence. An old Greek source comments that 'many people have good natural abilities which are ruined by idleness; on the other hand, sobriety, zeal and perseverance can prevail over indolence'. [4]

When the fable entered the European emblem tradition, the precept to 'hasten slowly' ( festina lente) was recommended to lovers by Otto van Veen in his Emblemata Amorum (1608), using a relation of the story. There the infant figure of Eros is shown passing through a landscape and pointing to the tortoise as it overtakes the sleeping hare under the motto "perseverance winneth." [5] Later interpreters too have asserted that the fable's moral is the proverbial 'the more haste, the worse speed' ( Samuel Croxall) or have applied to it the biblical observation that 'the race is not to the swift' (Ecclesiastes 9.11).

In the 19th century the fable was given satirical interpretations. In the social commentary of Charles H. Bennett's The Fables of Aesop translated into Human Nature (1857), the hare is changed to a thoughtful craftsman prostrate under the foot of a capitalist entrepreneur. [6] Lord Dunsany brings out another view in his "The True History of the Tortoise and the Hare" (1915). There the hare realises the stupidity of the challenge and refuses to proceed any further. The obstinate tortoise continues to the finishing line and is proclaimed the swiftest by his backers. But, continues Dunsany,

the reason that this version of the race is not widely known is that very few of those that witnessed it survived the great forest-fire that happened shortly after. It came up over the weald by night with a great wind. The Hare and the Tortoise and a very few of the beasts saw it far off from a high bare hill that was at the edge of the trees, and they hurriedly called a meeting to decide what messenger they should send to warn the beasts in the forest. They sent the Tortoise. [7]

A century later Vikram Seth broadened the satire in his verse retelling of the fable in Beastly Tales (1991) and had it both ways. There is nothing to recommend in the behaviour of either protagonist by way of a moral. While the Tortoise's victory bolsters its joyless self-righteousness, the hare-brained loser is taken up by the media and "pampered rotten/ And the tortoise was forgotten". [8]

The only satisfactory refutation has been mathematical and since then the name of the fable has been applied to the function described in Zeno's paradox. In mathematics and computer science, the tortoise and the hare algorithm is an alternative name for Floyd's cycle-finding algorithm.

Illustrations of the fable 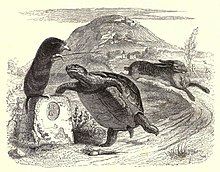 A 19th-century illustration of La Fontaine's Fables by Jean Grandville

There is a Greek version of the fable but no early Latin version. For this reason it did not begin to appear in printed editions of Aesop's fables until the 16th century, one of the earliest being Bernard Salomon's Les Fables d'Esope Phrygien, mises en Ryme Francoise (1547). [11] Versions followed from the Netherlands (in Dutch, 1567) and Flanders (in French, 1578) [12] but none in English before Francis Barlow's edition of 1667. [13]

Among the many illustrations of the fable, that by the French caricaturist Jean Grandville is novel in portraying the tortoise as running upright. This is also how he is shown in the Walt Disney cartoon version of "The Tortoise and the Hare" (1935). [14] Another departure from the ordinary in Grandville's etching is the choice of a mole (complete with dark glasses) rather than, as usual, a fox as the judge at the finishing line. Auguste Delierre makes the judge a monkey in the 1883 edition of La Fontaine's fables that he illustrated. [15] [16] La Fontaine says in his rhyme that it does not matter who the judge is; his interpreters have taken him at his word. 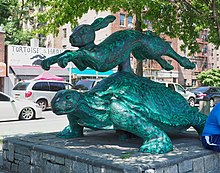 Outside of book production, there is an early 17th-century oil painting of the fable by the Flemish landscape artist Jan Wildens. [17] The hare enters on the left, racing over an upland road as dawn breaks; the tortoise is nowhere in sight. In the mid-19th century, the French animal painter Philibert Léon Couturier also devoted an oil painting to the fable in which, as in Grandville's illustration, the tortoise is shown racing upright. [18] In modern times there have been two pieces of popular sculpture aimed at children. Nancy Schön's was made to commemorate the centenary of the Boston Marathon in 1996 and is sited in Copley Square, the finishing line for the race. [19] The tortoise is shown determinedly stumping forward while the hare has paused to scratch behind its ear. In the following year a painted steel sculpture by Michael Browne and Stuart Smith was set up near the cross-country finish line at Van Cortlandt Park in the Bronx. [20] The hare is mounted on the tortoise's shell and appears to be trying to leap over him.

The fable has also appeared on stamps from several countries. These include:

Many allusions to the fable in musical titles are of limited or no relevance, but two interpretive instrumental versions may be noted. The one by Yellowjackets jazz quartet was recorded on their Politics album in 1988. [31] The Anglo-Irish band Flook's title is on their Haven album (2005). [32]

There have also been several verbal settings of Aesop's fable:

The many other variants of the story in oral folk tradition appear worldwide and are classed as Aarne-Thompson-Uther type 275. [39] In most of these there is a race between unequal partners but most often brain is matched against brawn and the race is won by means of trickery. Broadly this is of two types: either the slower animal jumps on the other's back or tail and hops off at the end when the creature turns round to see where his challenger has got to, or else he is deceived by lookalikes substituting themselves along the course.

Tales with a similar theme emphasizing doggedness have been recorded in Native American culture. Hummingbird and Crane agree to race from one ocean to the other. Though Hummingbird flies faster, he stops at night to sleep. Crane, however, flies overnight and is overtaken by Hummingbird later and later during the day, at length coming in first. The ultimate prize differs between versions and includes choice of habitat, the love of a girl, or the right to cut the other down to size. [40]

Wikisource has original text related to this article:
The Tortoise and the Hare

Media related to The Tortoise and the Hare at Wikimedia Commons