The Crying of Lot 49 Information

The Crying of Lot 49 is a 1966 novel by American author Thomas Pynchon. The shortest of Pynchon's novels, the plot follows Oedipa Maas, a young Californian woman who begins to embrace a conspiracy theory as she possibly unearths a centuries-old feud between two mail distribution companies; one of these companies, Thurn and Taxis, actually existed (1806–1867) and was the first private firm to distribute postal mail. Like most of Pynchon's output, Lot 49 is often described as postmodernist literature. Time included the novel in its " TIME 100 Best English-Language Novels from 1923 to 2005". [1]

In the mid-1960s, Oedipa Maas lives a fairly comfortable life in the (fictional) northern Californian village of Kinneret, despite her lackluster marriage with Mucho Maas, a rudderless radio jockey, and her sessions with Dr. Hilarius, an unhinged German psychotherapist who tries to medicate his patients with LSD. One day, Oedipa learns of the death of an ex-lover, Pierce Inverarity, an incredibly wealthy real-estate mogul, who has left her as the executor of his massive estate. Inverarity appears to have owned or financed nearly all the goings-on in San Narciso, a (fictional) southern Californian city near Los Angeles. Oedipa goes to San Narciso to meet Inverarity's lawyer, a former child actor named Metzger, and they begin an affair, which fascinates a local teenaged rock band, The Paranoids, who begin following them voyeuristically. At a bar, Oedipa notices the graffitied symbol of a muted post horn with the label "W.A.S.T.E.", and she chats with Mike Fallopian, a right-wing historian and critic of the postal system, who claims to use a secret postal service.

It surfaces that Inverarity had Mafia connections, illicitly attempting to sell the bones of forgotten U.S. World War II soldiers for use as charcoal to a cigarette company. One of The Paranoids mentions that this strongly reminds him of a Jacobean revenge play he recently saw called The Courier's Tragedy. Intrigued by the coincidence, Oedipa and Metzger attend a performance of the play, which briefly mentions the name "Tristero". After the show, Oedipa approaches the play's director, Randolph Driblette, but he deflects her questions about the mention of the unusual name. After seeing a man scribbling the post horn symbol, Oedipa seeks out Mike Fallopian, who tells her he suspects a conspiracy. This is supported when watermarks of the muted horn symbol are discovered hidden on Inverarity's private stamp collection. The symbol appears to be a muted variant of the coat of arms of Thurn and Taxis: an 18th-century European postal monopoly that suppressed all opposition, including Trystero (or Tristero), a competing postal service that was defeated but possibly driven underground. Based on the symbolism of the mute, Oedipa theorizes that Trystero continues to exist as a countercultural secret society with unknown goals.

She researches an older censored edition of The Courier's Tragedy, which confirms that Driblette indeed made a conscious choice to include the "Tristero" line. She seeks answers through a machine claimed to have psychic abilities, but the experience is awkward and unsuccessful. As she feverishly wanders the Bay Area, the muted post horn symbol appears among an engineer's doodles, as part of children's sidewalk drawings, amidst Chinese ideograms in a shop window, and in many other places. Finally, a nameless man at a gay bar tells her that the muted horn symbol simply represents an anonymous support group for people with broken hearts: Inamorati Anonymous. She directly witnesses people referring to and using mailboxes disguised as regular waste bins marked with "W.A.S.T.E." (later suggested to be an acronym for "We Await Silent Tristero's Empire"). Even so, Oedipa sinks into paranoia, wondering if Trystero actually exists or if she is merely overthinking a series of false clues with no definite connections.

Fearing for her sanity, Oedipa makes an impromptu visit to Dr. Hilarius, only to find him having lost his own mind, firing a gun randomly and raving madly about his days as a Nazi medical intern at Buchenwald. She helps the police subdue him, only to return home to find that her husband Mucho has lost his mind in his own way, having become addicted to LSD. Oedipa consults an English professor about The Courier's Tragedy, learns that Randolph Driblette has mysteriously committed suicide, and is left pondering whether Trystero is simply a prolonged hallucination, an actual historical plot, or some elaborate practical joke that Inverarity arranged for her before his death. The book ends with Oedipa at an auction of Inverarity's possessions, waiting on the bidding of lot 49, which contains his stamp collection. Having learned that a particular bidder is interested in the stamps, she hopes to discover if this person is a representative of the Trystero secret society.

Critics have read the book as both an "exemplary postmodern text" and an outright parody of postmodernism. [2] [3] Contemporary reviews were mixed, with many critics comparing it unfavourably to Pynchon's first novel V. One reviewer in Time described the novel as "a metaphysical thriller in the form of a pornographic comic strip". [4] In a positive The New York Times review Richard Poirier wrote: "Pynchon's technical virtuosity, his adaptations of the apocalyptic-satiric modes of Melville, Conrad, and Joyce, of Faulkner, Nathanael West, and Nabokov, the saturnalian inventiveness he shares with contemporaries like John Barth and Joseph Heller, his security with philosophical and psychological concepts, his anthropological intimacy with the off-beat--these evidences of extraordinary talent in the first novel continue to display themselves in the second." [5]

Pynchon described in the prologue to his 1984 collection Slow Learner an "up-and-down shape of my learning curve" as a writer, and specifically does not believe he maintained a "positive or professional direction" in the writing of The Crying of Lot 49, "which was marketed as a 'novel', and in which I seem to have forgotten most of what I thought I'd learned up until then." [6]

Allusions in the book 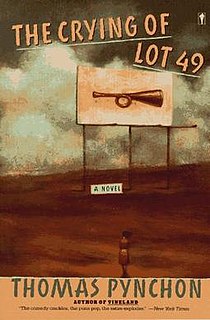 As ever with Pynchon's writing, the labyrinthine plots offer myriad linked cultural references. Knowing these references allows for a much richer reading of the work. J. Kerry Grant wrote A Companion to the Crying of Lot 49 in an attempt to catalogue these references but it is neither definitive nor complete. [7]

The Crying of Lot 49 was published shortly after Beatlemania and the " British invasion" that took place in the United States and other Western countries. Internal context clues indicate that the novel is set in the summer of 1964, the year in which A Hard Day's Night was released. Pynchon makes a wide variety of Beatles allusions. Most prominent are The Paranoids, a band composed of cheerful marijuana smokers whose lead singer, Miles, is a high-school dropout described as having a "Beatle haircut." The Paranoids all speak with American accents but sing in English ones; at one point, a guitar player is forced to relinquish control of a car to his girlfriend because he cannot see through his hair. It is not clear whether Pynchon was aware of the Beatles' own nickname for themselves, "Los Para Noias"; since the novel is replete with other references to paranoia, Pynchon may have chosen the band's name for other reasons. [8]

Pynchon refers to a rock song, "I Want to Kiss Your Feet", an adulteration of " I Want to Hold Your Hand". The song's artist, Sick Dick and the Volkswagens, evokes the names of such historical rock groups as the El Dorados, the Edsels, the Cadillacs and the Jaguars (as well as an early name the Beatles themselves used, "Long John and the Silver Beetles"). "Sick Dick" may also refer to Richard Wharfinger, author of "that ill, ill Jacobean revenge play" known as The Courier's Tragedy. [7] The song's title also keeps up a recurring sequence of allusions to Saint Narcissus, a 3rd-century bishop of Jerusalem.

Late in the novel, Oedipa's husband, Mucho Maas, a disc jockey at Kinneret radio station KCUF, describes his experience of discovering the Beatles. Mucho refers to their early song " She Loves You", as well as hinting at the areas the Beatles were later to explore. Pynchon writes,

Whenever I put the headset on now," he'd continued, "I really do understand what I find there. When those kids sing about 'She loves you,' yeah well, you know, she does, she's any number of people, all over the world, back through time, different colors, sizes, ages, shapes, distances from death, but she loves. And the 'you' is everybody. And herself. Oedipa, the human voice, you know, it's a flipping miracle." His eyes brimming, reflecting the color of beer. "Baby," she said, helpless, knowing of nothing she could do for this, and afraid for him. He put a little clear plastic bottle on the table between them. She stared at the pills in it, and then understood. "That's LSD?" she said.

Pynchon, like Kurt Vonnegut, was a student at Cornell University, where he probably at least audited Vladimir Nabokov's Literature 312 class. (Nabokov had no recollection of him, but Nabokov's wife Véra recalls grading Pynchon's examination papers, thanks only to his handwriting, "half printing, half script".) [9] The year before Pynchon graduated, Nabokov's novel Lolita was published in the United States. Lolita introduced the word "nymphet" to describe a girl between the ages of nine and fourteen, sexually attractive to the hebephilic main character, Humbert Humbert and it was also used in the novel's adaptation to cinema in 1962 by Stanley Kubrick. In the following years, mainstream usage altered the word's meaning to apply to older girls. Perhaps appropriately, Pynchon provides an early example of the modern "nymphet" usage entering the literary canon. Serge, The Paranoids' teenage counter-tenor, loses his girlfriend to a middle-aged lawyer. At one point he expresses his angst in song:

What chance has a lonely surfer boy
For the love of a surfer chick,
With all these Humbert Humbert cats
Coming on so big and sick?
For me, my baby was a woman,
For him she's just another nymphet.

Near the beginning of The Crying of Lot 49, Oedipa recalls a trip to an art museum in Mexico with Inverarity, during which she encountered a painting, Bordando el Manto Terrestre ("Embroidering the Earth’s Mantle") by Remedios Varo. [10] The 1961 painting shows eight women inside a tower, where they are presumably held captive. Six maidens are weaving a tapestry that flows out of the windows and seems to constitute the world outside of the tower. Oedipa's reaction to the tapestry gives us some insight into her difficulty in determining what is real and what is a fiction created by Inverarity for her benefit:

She had looked down at her feet and known, then, because of a painting, that what she stood on had only been woven together a couple thousand miles away in her own tower, was only by accident known as Mexico, and so Pierce had taken her away from nothing, there'd been no escape.

Pynchon devotes a significant part of the book to a play-within-a-book, a detailed description of a performance of an imaginary Jacobean revenge play, involving intrigues between Thurn und Taxis and Trystero. Like "The Mousetrap", based on "The Murder of Gonzago" that Shakespeare placed within Hamlet, the events and atmosphere of The Courier's Tragedy (by the fictional Richard Wharfinger) mirror those transpiring around them. In many aspects it resembles a typical revenge play, such as The Spanish Tragedy by Thomas Kyd, Hamlet by William Shakespeare and plays by John Webster and Cyril Tourneur.

The Crying Of Lot 49 Videos

The Crying Of Lot 49 Websites

The Crying Of Lot 49 Encyclopedia Articles