The earliest incarnation of the band was formed by Kim Deal and Tanya Donelly in 1989 as a side-project alongside their full-time bands Pixies and Throwing Muses respectively. To record their debut album, 1990's Pod, Deal and Donelly recruited bassist Josephine Wiggs of The Perfect Disaster and drummer Britt Walford of Slint. Kim's sister Kelley was brought into the band as a third guitarist (though at the time, Kelley famously had never played guitar before joining the band) in 1992 to record the Safari EP, and shortly thereafter Tanya Donelly left to concentrate full-time on her own new band, Belly, leaving Kelley Deal as the sole lead guitarist, while Britt Walford left as well around the same time. While the band's first record wasn't initially a commercial success, the band had developed a following among indie rock fans and praises from people such as Nirvana frontman Kurt Cobain, who cited Pod as one of his all-time favorite albums, [1] the band prepared to record their next album.

In 1993, the Pixies broke up, leaving Deal to concentrate on The Breeders as her full-time band. Kim recruited local Dayton, Ohio musician Jim Macpherson (previously a member of Dayton indie rock band The Raging Mantras) to replace the recently departed Walford on drums, cementing the Breeders' best-known line-up. The band's most commercially successful album, Last Splash, was released in 1993 in the midst of the early 1990s alternative rock boom. The album went on to be certified platinum by the RIAA, and is best known for its hit single " Cannonball". [2]

A year after the success of Last Splash, drug and alcohol issues forced the band into hiatus in 1994, while both the Deal sisters did separate stints in rehab in the following years. During the band's hiatus, Kim Deal formed the short-lived alternative rock band The Amps, recording a single album, Pacer, in 1995. In the late 1990s, Kim and Kelley reformed The Breeders with a new line-up (including members of the band Fear) and released two more albums, Title TK in 2002 and Mountain Battles in 2008. In 2013, Kim and Kelley had announced that the "classic" line-up (including Josephine Wiggs and Jim Macpherson) had reunited for the first time since the 1990s for a new series of tours celebrating the 20th anniversary of the band's hit album Last Splash. They released their fifth album All Nerve in 2018, the "classic" Breeders line-up's first full-length album together since 1993's Last Splash. 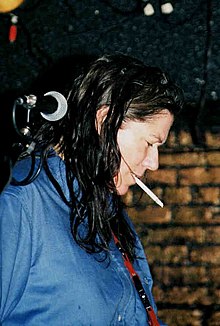 The Breeders' history began when Kim Deal, not fulfilled in her subordinate role as bassist of the Pixies, [3] began writing new material while the Pixies were touring Surfer Rosa in Europe with Throwing Muses. As neither band had plans in the immediate future, Deal discussed possible side projects with Throwing Muses guitarist Tanya Donelly. [4] They recruited Carrie Bradley, violinist and vocalist in Boston band Ed's Redeeming Qualities, and recorded a short demo tape. Tracks on the demo tape included early versions of "Lime House", "Doe", and "Only in 3's". [5]

With the help of three different drummers— David Narcizo, Mickey Bones, and Carl Haarer—and bassist Ray Halliday, Deal and Donelly completed their demo tape and subsequently played one show at The Rathskeller in Boston. They were not called The Breeders at this point, but were billed as "Boston Girl Super-Group". [5] The band sent the tape to the English independent record label 4AD because both the Pixies and the Throwing Muses were signed to the label. Upon hearing the tape, 4AD head Ivo Watts-Russell remarked, "This is absolutely magical, beautiful stuff." [6] Deal originally described the band as " the Bangles from Hell". [7]

The name Breeders had previously been used for a band Deal led with her twin sister Kelley. [3] " Breeders", a gay slang term for heterosexuals, was chosen because Kim Deal found it humorous and also reflected her love of horror films, specifically referencing David Cronenberg's 1979 film The Brood. [8]

4AD gave Deal and Donelly a budget of $11,000 [9] to make an album. Deal asked The Perfect Disaster's Josephine Wiggs to play bass. The two had first met when Perfect Disaster supported the Pixies in London in 1988. Deal asked Steve Albini, who had worked on the Pixies' 1988 album Surfer Rosa, to record the album. The Breeders did not have a drummer, so Albini suggested Britt Walford of Slint. Walford agreed to play on the album under the pseudonym "Shannon Doughton". [10]

A week of rehearsal took place at Wiggs's house in Bedfordshire, England, and Pod was recorded in ten days in Edinburgh, Scotland. [6] They used the remaining time to record a Peel Session and a video for "Hellbound." [11] Returning to London, they played two shows, the only time that this lineup ever appeared onstage together. Released on 28 May 1990, [10] Pod, although not commercially successful, received positive reviews from alternative and mainstream critics alike; The New York Times' Karen Schoemer wrote: "The angular melodies, shattered tempos, and screeching dynamics recall elements of each of the women's full-time bands, but Pod has a smart, innovative edge all its own." [12] The album was also famously cited by Kurt Cobain as one of his favorite records ever: "The main reason I like [the Breeders] is for their songs, for the way they structure them, which is totally unique, very atmospheric. I wish Kim was allowed to write more songs for the Pixies, because ' Gigantic' is the best Pixies song, and Kim wrote it." [13] He listed Pod as one of the 50 albums he thought were most influential to Nirvana's sound in his journal in 1993. [14] In July 2007, in a chat forum interview, Pod's engineer Steve Albini revealed that he considered the album to be among his best works. [15]

Following Pod, the members of The Breeders returned to their original bands. The Pixies released Bossanova in 1990 and Trompe le Monde in 1991, but by the end of 1991 were becoming less active. Deal, with time off from the Pixies, visited Wiggs in Brighton, and they went into a London studio with Spacemen 3/ Spiritualized drummer Jon Mattock to record a new song called "Safari." The other three tracks on what became the Safari EP were recorded in New York with Walford and Donelly, who was by then planning to form Belly. [16] Deal then asked her sister Kelley to take over on guitar, even though, famously, Kelley did not know how to play guitar. The Pixies became inactive in mid-1992, at which time drummer Jim Macpherson was recruited and The Breeders became a full-time band, [10] opening for Nirvana on their 1992 European tour. [17]

In January 1993, The Breeders went to Coast Recorders in San Francisco to record their second album. Last Splash was released in August 1993 to widespread acclaim and commercial success. Three singles were released from the album, including "Cannonball", which made it to no. 2 on the Billboard Modern Rock Tracks chart. [18] The band contributed a live recording of the song "Iris" to the 1993 AIDS-Benefit Album No Alternative produced by the Red Hot Organization. In 1993, they toured supporting Nirvana on their In Utero tour, and in 1994, Last Splash received a platinum certification by the Recording Industry Association of America. Also in 1994, the band secured a prime spot on the Lollapalooza tour. [17] This lineup played their last show together on September 5, 1994, at Lollapalooza in Los Angeles, California.

In 1995, Kelley was involved in a drug bust, which put The Breeders on an indefinite hiatus. Kim formed a side project, The Amps, with Macpherson, Dayton locals bassist Luis Lerma (member of The Tasties) and guitarist Nate Farley, who later joined Guided by Voices. In October 1995, The Amps released the album Pacer.

Meanwhile, in New York, Wiggs recorded and co-produced the Kostars' album Klassics with a K, a Luscious Jackson side-project (also touring with them playing drums), released a solo album on the Beastie Boys' Grand Royal label, and released an album on Atlantic Records under the name Dusty Trails with Luscious Jackson keyboardist Vivian Trimble.

In 1996, Kim reclaimed The Breeders moniker, but with essentially The Amps' lineup plus violinist Carrie Bradley, and played a few California dates. They made an unsuccessful attempt at recording a third studio album in 1997. Kelley Deal rejoined the band the following year and wrote and recorded songs with her sister, although the only material released during this period was a cover of The Three Degrees' take on James Gang's "Collage", recorded for The Mod Squad soundtrack in 1999. [17]

The Breeders also performed in an episode of Buffy the Vampire Slayer in early 2002. They were approached by the production staff after they had been playing the show's theme, written by Nerf Herder, as a regular part of their concert set. The episode is entitled " Him", and aired November 5, 2002; they sang their song "Little Fury" at the Bronze. They also contributed the track "Wicked Little Town: Hedwig Version" to the 2003 Hedwig and the Angry Inch tribute album, " Wig in a Box". 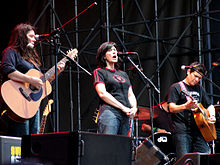 The Breeders performing in 2008.

The Breeders performing at the Black Cat nightclub in Washington, D.C. in 2009.

Mountain Battles was released in April 2008 on 4AD. It features Kim and Kelley, Jose Medeles, and Mando Lopez. They went to Refraze Recording Studio in Dayton, Ohio to record and mix the majority of the tracks.

The Breeders' third EP, Fate to Fatal was released on April 21, 2009. It contains a Bob Marley cover ("Chances Are") and a song with vocals by Mark Lanegan. The title track was recorded at The Fortress Studios, London, by The Go! Team producer Gareth Parton. The music video featured the Arch Rival Roller Girls, a St. Louis roller derby league. [20]

They curated an edition of the All Tomorrow's Parties festival in May 2009 in Minehead, England. They played the ATP New York 2010 music festival in Monticello, New York, in September 2010.

The Breeders performing in Paris, France in 2017.

In 2012, the reunited Last Splash lineup of Kim and Kelley, Macpherson, and Wiggs announced a tour to coincide with a 20th anniversary reissue by 4AD of Last Splash, entitled LSXX. The tour began in the US, continued in Europe, Australia, and South America, and included the Deerhunter-curated All Tomorrow's Parties festival. [21] A teaser video was made by the band showing the reunited lineup in rehearsal. [22]

In a June 2016 article, Stereogum reported that the band was in their Ohio studio recording a follow up to Mountain Battles, and that Courtney Barnett, who was in town for the Nelsonville Music Festival, recorded some backup vocals for one of the album's songs. [23]

A single, " Wait in the Car", was released on October 3, 2017, and is part of an upcoming seven-inch series to be issued by 4AD. The song will be available on three different seven-inch records, limited to only 1,500 copies. Rolling Stone described the song as "a classic Breeders bruiser, clocking it at two minutes, and packed with punchy drums, sugar-rush power chords, and lead riffs". [24] During a BBC interview with Lauren Laverne on October 13, 2017, Kim revealed that the band expected to release a new album in 2018, possibly on the 4AD label. The 4AD Label announced on January 9, 2018, that the new album, All Nerve, would be released on March 2, 2018. [25] The title track was released as the album's second single on the same day. [26] All Nerve, was released as planned on March 2, 2018. [27]

In March 2021, the band released their first new recording in over three years: A cover of His Name is Alive's "The Dirt Eaters." The cover is part of a forthcoming 4AD covers compilation, entitled Bills and Aches and Blues. [28]