The Book and the Sword (2008 TV series) Information 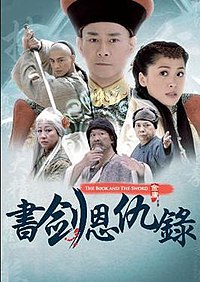 The Book and the Sword is a 2008 Chinese television series adapted from Louis Cha's novel of the same title. The series was first broadcast on CETV-3 in China in 2009. It starred Qiao Zhenyu, Adam Cheng, Niki Chow, and Liu Dekai.

See also: The Book and the Sword § Plot

Although the flow of events is generally similar to that in the novel, Yu Wanting's role is greatly emphasised, with him being the primary antagonist instead of the Qianlong Emperor. "Yu Wanting" is actually the alter ego of the exiled prince Yintang, a younger half-brother of the Yongzheng Emperor. The power-hungry Yintang seeks vengeance and wants to usurp his nephew (the Qianlong Emperor)'s throne. Yintang knows the truth that the Qianlong Emperor is not the legitimate successor to the throne and he constantly threatens the emperor with the evidence he holds. Yintang rallies a group of martial artists in the jianghu and establishes the Red Flower Society. He instigates the society's members and some tribal peoples in northwestern China to rebel against the Qing government.

Yintang fakes his death at one point and allows his godson, Chen Jialuo, to succeed him as leader of the Red Flower Society. However, within the society, the Chang brothers, Wei Chunhua and Shi Shuangying are the only ones who know that "Yu Wanting" is still alive, and they serve as his spies by watching over Chen and the others. The series also feature a different ending from the novel, with many of the society's members meeting their ends at the hands of Yintang. The surviving ones, under Chen Jialuo's leadership, confront Yintang to put an end to his ruthless ambitions.

The series has been criticised on Guangzhou Daily by viewers, who feel that the story deviates the most from the original source among all the film and television adaptations of Louis Cha's works. [1]