The Adventure of the Naval Treaty Information

"The Adventure of the Naval Treaty", one of the 56 Sherlock Holmes short stories written by Sir Arthur Conan Doyle, is one of 12 stories in the cycle collected as The Memoirs of Sherlock Holmes. It was first published in The Strand Magazine in the United Kingdom in October and November 1893, and in Harper's Weekly in the United States on 14 and 21 October 1893. [1]

Doyle ranked "The Adventure of the Naval Treaty" 19th in a list of his 19 favourite Sherlock Holmes stories. [2]

Holmes holding a rose, drawn by Sidney Paget.
"Our highest assurance of the goodness of Providence seems to me to rest in the flowers..."

Dr. Watson receives a letter, which he then refers to Holmes, from an old schoolmate, Percy Phelps, now a Foreign Office employee from Woking who has had an important naval treaty stolen from his office. It disappeared while Phelps had stepped out of his office momentarily late in the evening to see about some coffee that he had ordered. His office has two entrances, each joined by a stairway to a single landing. The commissionaire kept watch at the main entrance. There was no one watching at the side entrance. Phelps also knew that his fiancée Annie Harrison's brother Joseph was in town and that he might drop by. Phelps was alone in the office.

Phelps pulled the bell cord in his office to summon the commissionaire, and to his surprise the commissionaire's wife came up instead. He worked at copying the treaty that he had been given while he waited. At last, he went to see the commissionaire when it had taken some time for the coffee to arrive. He found him asleep with the kettle boiling furiously. He did not need to wake him up, however, as just then, the bell linked to his office rang. Realizing that someone was in his office with the treaty still spread out on his desk, Phelps rushed back up and found that the document had vanished, as had the thief.

It seemed obvious that the thief had come in through the side entrance; otherwise he would have passed Phelps on the stairs at some point, and there were no hiding places in his office. No footprints were seen in the office despite its being a rainy evening. The only suspect at that point was the commissionaire's wife, who had quickly hurried out of the building at about that same time.

This was followed up, but no treaty was found with her. Other suspects were the commissionaire himself and Phelps's colleague Charles Gorot. Neither seemed a very likely suspect, but the police followed them both, and the commissionaire's wife. As expected, nothing came of it.

Phelps was driven to despair by the incident, and when he got back to Woking, he was immediately put to bed in his fiancée's brother's room. There he remained, sick with "brain fever" for more than two months, his reputation and honour apparently gone.

Holmes is quite interested in this case, and makes a number of observations that others seem to have missed. The absence of footprints, for instance, might indicate that the thief came by cab. There is also the remarkable fact that the dire consequences that ought to result from such a treaty being divulged to a foreign government have not happened in all the time that Phelps has been ill. Why was the bell rung?

Holmes gathers some useful information at Briarbrae, the Phelps house, where Phelps' fiancée and her brother have also been staying. She has been nursing him days while a hired nurse kept watch over him at night. Joseph also remains to be of service if he can. 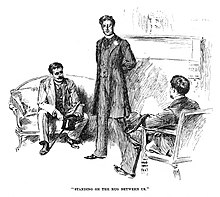 After seeing Phelps at Woking, Holmes makes some inquiries in town. He visits Lord Holdhurst, Phelps's uncle, the Foreign Secretary, who gave his nephew his important task of copying the treaty, but Holmes dismisses him as a suspect, and is quite sure now that no one could have overheard their discussion about the task. Lord Holdhurst reveals to Holmes the potentially disastrous consequences that might occur if the treaty should fall into the hands of the French or Russian embassies. Fortunately, nothing has yet happened, despite the many weeks since the theft. Apparently, the thief has not yet sold the treaty, and Lord Holdhurst informs Holmes that the villain's time is running out, as the treaty will soon cease to be a secret. Why, then, has the thief not sold the treaty?

Holmes returns to Woking, not having given up, but having to report that no treaty has turned up yet. Meanwhile, something interesting has happened at Briarbrae: someone tried to break in during the night, into Phelps's sick-room, no less. Phelps surprised him at the window but could not see his face through the hooded cloak that he was wearing. He did, however, see the interloper's knife as he dashed away. This happened the very first night that Phelps felt he could do without the nurse.

Unknown to anyone else at this point—although Watson infers it from his friend's taciturnity—Holmes knows what is going on. He orders Annie to stay in her fiancé's sick room all day, and then to leave it and lock it from the outside when she finally goes to bed. This she does.

Holmes finds a hiding place near Briarbrae to keep watch after having sent Watson and Phelps to London on the train, and also letting the occupants at Briarbrae believe that he intended to go with them, ostensibly to keep Phelps out of harm's way should the interloper come back.

Holmes waits until about two o'clock in the morning, when the interloper appears—out of the house's tradesman's entrance. He goes to the window, gets it open as before, opens a hidden hatch in the floor, and pulls out the treaty. He then steps straight back out the window and Holmes intercepts him after which they fight, with Holmes emerging victorious but having suffered minor injuries.

The treaty has been in Phelps's sick room all the time, while the thief, Joseph, who usually slept in that room, could not get to it. He rang the bell in Phelps's office after dropping by to visit and finding him not there, but then he saw the treaty and at once realized its potential value. His inability to reach the treaty explains why there have been no dire political consequences. Holmes explains that Joseph had lost a great deal of money on the stock market, which explains his need for money. Being a very desperate and selfish man, he cared nothing for the consequences Phelps might suffer from the document's loss.

Always one with a flair for the dramatic, Holmes has the treaty literally served up to Phelps as breakfast the next morning at 221B Baker Street, London, where he has spent the night under Watson's watchful eyes (although there has been no danger). Phelps is ecstatic, Holmes is quietly triumphant, and once again, Watson is dumbfounded.

Holmes explains that several clues all pointed to Joseph: the thief knew the ways of the office well, given that he had rung the bell just before seeing the treaty; Phelps had shown his relatives around the office; Joseph had dined in London that evening, and took the 11:00 PM train to Woking; Phelps expected to meet him for the train; the theft happened at about 9:40 PM; it was a rainy night, but there were no wet footprints in the passage or office, so the thief had come in a cab; and the burglar who tried to break into Phelps' room was familiar with the layout of the house and the habits of those who lived there.

This is the longest of the short stories published in The Strand Magazine before Sherlock Holmes's "death" in " The Final Problem". As such, it was originally published in two parts. [3]

This story contains the first reference to " The Adventure of the Second Stain", which would not be published until around 11 years later, although the facts of the later-written story are different from those mentioned by Watson in "The Naval Treaty." [4]

Another short film based on the story was released in 1922 as part of the Sherlock Holmes Stoll film series, with Eille Norwood as Sherlock Holmes and Hubert Willis as Dr. Watson. [10]

The story was adapted for the 1968 BBC series with Peter Cushing. The episode is now lost. [11]

The story was adapted as the 1984 episode " The Naval Treaty" from the first series of the Granada TV series The Adventures of Sherlock Holmes, which stars Jeremy Brett.

" The Great Game" (2010), the third episode of the television series Sherlock, uses "The Adventure of the Naval Treaty" and " The Adventure of the Bruce-Partington Plans" as inspiration, as both deal with the theft of government papers related to the navy.

"The Adventure of the One Hundred Tadpoles", a 2015 episode of the NHK puppetry television series Sherlock Holmes, is based on the story. In the episode, Holmes and Watson try to take back a stolen picture which was entered in an art competition. The theme of the competition is tadpoles because "Tadpole" was the nickname of Sir Percy Phelps, founder of Beeton School.

"The Naval Treaty" was adapted by Edith Meiser as an episode of the American radio series The Adventures of Sherlock Holmes with Richard Gordon as Sherlock Holmes and Leigh Lovell as Dr. Watson. The episode aired on 19 January 1931. [12] Another episode adapted from the story aired in August 1936 (with Gordon as Holmes and Harry West as Watson). [13]

Meiser also adapted the story as a 1940 episode of the American radio series The New Adventures of Sherlock Holmes with Basil Rathbone as Holmes and Nigel Bruce as Watson. [14] The story was also adapted as an episode titled "The Case of the Stolen Naval Treaty" that aired in 1947 (with John Stanley as Holmes and Alfred Shirley as Watson). [15]

A radio dramatisation of "The Naval Treaty" aired on the BBC Home Service in 1952, as part of the 1952–1969 radio series starring Carleton Hobbs as Holmes and Norman Shelley as Watson. The production was adapted by Felix Felton. [16] Another dramatisation, which was also adapted by Felton and starred Hobbs and Shelley with a different supporting cast, aired in 1957 on the Home Service. [17] A different radio version of "The Naval Treaty" adapted by Michael Hardwick aired on the BBC Light Programme in 1960, with Hobbs and Shelley again playing Holmes and Watson respectively. [18]

An adaptation of the story aired on BBC radio in 1978, starring Barry Foster as Holmes and David Buck as Watson. [19]

The story was adapted as an episode of CBS Radio Mystery Theater titled "The Naval Treaty". The episode, which featured Gordon Gould as Sherlock Holmes and Bernard Grant as Dr. Watson, first aired in April 1982. [20]

"The Naval Treaty" was dramatised for BBC Radio 4 in 1992 by David Ashton as part of the 1989–1998 radio series starring Clive Merrison as Holmes and Michael Williams as Watson. It featured Patrick Malahide as Percy Phelps, Brett Usher as Lord Holdhurst, Norman Jones as Mr Tangey, and Petra Markham as Miss Tangey. [21]

A 2014 episode of The Classic Adventures of Sherlock Holmes, a series on the American radio show Imagination Theatre, was adapted from the story, with John Patrick Lowrie as Holmes and Lawrence Albert as Watson. [22]